Inventions From The Land Of Kings – Making Lives Easier 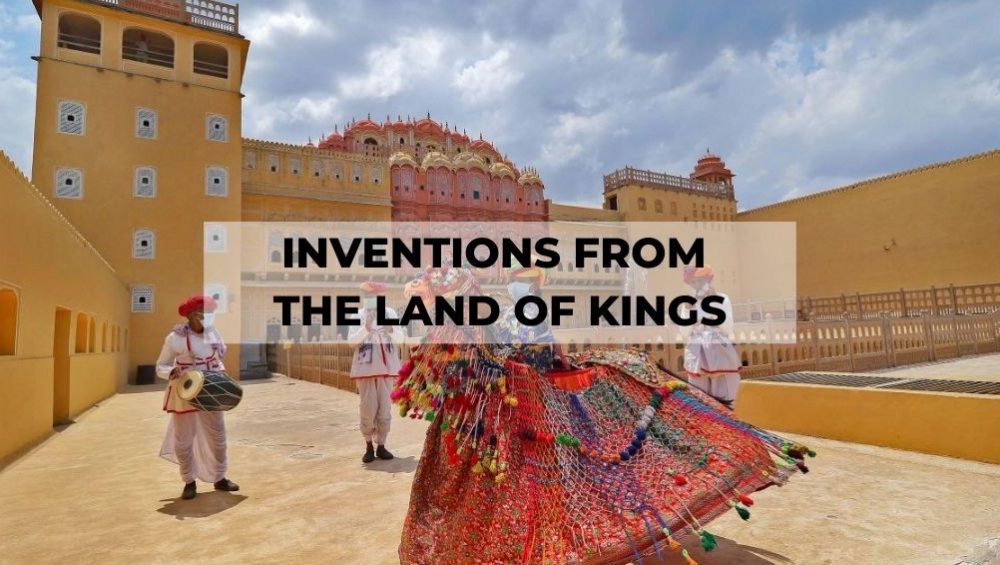 Inventions from Rajasthan- The bold and enthralling traditions and culture of Rajasthan attracts many tourists. From the sands of Thar to the magnificence of palaces, Rajasthan never loses its charm. However, the beauty of the state is not only the culture and heritage but also the inventions made here.

Rajasthan is a diverse state, with a hint of royalty and innovation. Then, creations are intriguing and captivating. Moreover, it is a beauty to the eyes of a viewer. Some of the many inventions that have originated from the roots of the imperial state are:

The best prodigious art forms of Rajasthan are Shekhawati wall paintings. The painters of Jaipur created the initial examples of these paintings. After a while, these wall paintings were in ultimate demand. Then, to fulfill the demand, the potter community of the state decorated the walls of the building.

The paintings represented the technology with the divine. Then, it reduced the overlapping of secularism and westernization. In conclusion, this led to a range of different styles and today it is a classical and regal form of art.

A creation that was not only innovative but also inspiring. Firstly, a student of Rajasthan Technical University created a cycling grinding machine. It saves electricity and also produces it through the principle of power transmission. The machine starts working when the paddles of the cycle generate power. The, the power transfers to the gear set and lead to the grinder pulley rotating at high RPM.

This machine can grind 20 kgs of wheat and charge a laptop at the same time. This device helps with the problem of working machines in rural areas where there is no electricity.

Farmers of India have faced continuous problems of irrigation for many years. From a long time ago the process of agriculture has been full of obstacles and discomfort. One such situation a 44-year-old man named Shrawan Kumar Bajya experienced. The problems faced by him encouraged him. His device helped more than 100 farmers in the area.

As surprising as it seems, Shrawan was not from the science department. He didn’t have a degree in technology or science but a class 10 dropout. He is an ordinary man from a small village in Sikar district known as Surrera. It is approximately 85 km from Jaipur. Shrawan was always fascinated with how the machine works. He created a terrific machine that helped many people.

The technique of test-tube fertilization of angiosperms

Panchanan Maheshwari is a successful scientist from Jaipur, Rajasthan. He completed his education at a college in Allahabad named Ewing Christian College. During his college years, he shifted his studies from medicine to science. There were some of the great achievements of Panchanan Maheshwari. It was his technique of test-tube fertilization of angiosperms. This innovation was epic in the field as earlier hybrid plans could not crossbreed on their own. With this technique, new hybrid plans can create.

Kanwar Sen was a great engineer in the state of Rajasthan. He was a chief engineer in Bikaner who came up with the project of Rajasthan Canal. Not only was this project successful, but it also was a supreme innovation in irrigation. Another one of his successes is executing the Ganga Canal Project. He contributed and dedicated efforts towards establishing strong relationships as a UN expert. During the Mekong Development Project for nine years. Kanwar Sen contributed to the development of the state of Rajasthan with one of the most interesting inventions.

Anuradha Acharya is a talented woman, from Bikaner, a developing part of the state from where she accomplished success and glory. She is an achiever of her dreams. She founded two recognized companies and remained a CEO for them. Ocimum Bio Solutions is a genomic outsourcing company for discovery, development, and diagnostics.

The other one is Mapmygenome. It is a molecular diagnostic company that generates personal genomics and diagnostics products. Her career saw many moments of awards and professional recognition. Some of them are Young Global Leader 2011 by the World Economic Forum. Also ET Women Ahead 2015 by Economic Times. And recognition in 2018 W-power trailblazers by Forbes. She wrote a section in the book ‘’Pharmaceutical Outsourcing: Discovery and Preclinical Services’’. She wrote on the topic of Research as a Service(RaaS).

Kriti Sharma is an artificial intelligence technologist. She is a philanthropist and a successful business executive from Rajasthan. At the beginning of her career, Kriti worked for Barclays. She created an e-commerce platform called Pingit. It was a mobile payments app, which won the award of App Store Best for the year 2012. Following this, she developed an app called Pegg in 2016. Pegg was a huge success in her career. It was the world’s first individual artificial intelligence for business finance.

Another one of her glories is her work for AI for Good association. In 2018, she launched rAInbow. It was digital support for the victims of domestic violence in South Africa. Kriti Sharma has contributed to Artificial Intelligence in many ways. They not only recognized her in the nation but globally.

The Palace on Wheels is a classic ivnetion and royal luxury tourist train. On 26th January 1982, launched a world-class and regal Palace on Wheels. It launched to promote tourism in Rajasthan. By Indian Railways and Rajasthan Tourism Development Corporation. The beauty of the train was the hint of heritage and culture in it.

But with time and trends upgraded. Fine cuisine, décor, and itinerary replaced the interior and structure renovated. To preserve the uniqueness and fascination of the train. It launched again in August 2009. The purpose of the train was to enhance the attraction of tourists. It provided them with an experience suited for the royalty of Rajasthan. This train has a combination of technology and the roots of heritage. This train has all the amenities and ambience which explains the tradition of the state.

String Puppet Theatre is a beautiful, expressive, and astonishing form of art. It originates from Rajasthan. Kathputli exhibits the culture, diversity, and uniqueness of the royal state. It is a wooden dummy that connects with a string at the top of the puppet’s head, which controls the puppeteers. The name ‘kathputli’ is derived from the fascinating language of Rajasthan. It originates from the word Kathputli where Kath means wood and Putli means doll.

To make a kathputli, the requirements are wood, cotton, and metal wires. Rajasthan’s outstanding creation was Kathputli. India is one of the first countries to have their original puppetry tradition. A historical assumption says approximately 1500 years ago. Rajasthani Bhatt Community generated this art form. It tells folk tales and stories through exhibitions. The kings, nobles of early time, and current period audience. Kathputli grew, becoming one of the most popular and enjoyed forms of Rajasthan Art.

Throughout the generations, these inventions will cherish and recognized. They hold the culture of the state. They show the beauty of creation and innovation that comes from the roots of Rajasthan.

Also follow Rajasthan Studio on Instagram for more amazing art and travel content. Reach out to us on email at contact[at]rajasthanstudio[dot]com. This blog is curated by Rajasthan studio and written by Deepti Parmar.