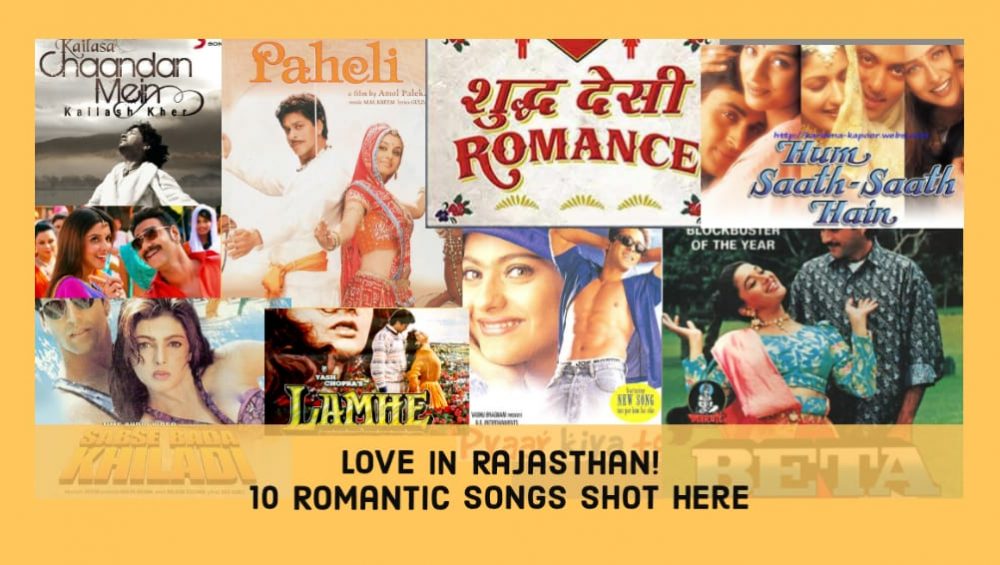 A number of romantic songs have been shot in Rajasthan. Rajasthan is Bollywood’s dearest treasured place to shoot in. Its vast landscapes, locales that display its heritage, and an air of royalty make it a movie central. These romantic songs capture Rajasthan’s essence in a few minutes where viewers want to romance too!

This song is from the iconic movie, ‘Beta’, starring Madhuri Dixit and Anil Kapoor. The song is shot in Jaipur’s must-visit Hawa Mahal, also known as the Palace of Winds. Also, the beautiful pink stone backdrop adds to Madhuri’s expressions during the song.

This ravishing song owes its grace to two factors. One is the obvious allure of Sridevi, and second is the garden that it is shot at. This song was shot at Kanak Vrindavan Garden in Jaipur, which is built in a valley surrounded by Aravali Hills. Best part? Entry and photography are free!

Shot in the Pushkar city of Rajasthan, it is one of the most underrated Kailash Kher’s songs. Pushkar is one of the oldest cities in India. It is also known for its annual fairs. In the song, the entire spirit of the city can be witnessed. It captures the ghats (stone staircases), roads between the deserts, and women adorning the traditional folk costumes. One of the most beautiful songs, indeed!

This fun ‘gets you on your dancing toes’ song is from the action-packed masala movie, Sabse Bada Khiladi. It stars Akshay Kumar and Mamta Kulkarni. This 90’s well-received song was shot at Birla Temple, Jaipur. The temple is contracted solely of white marbles going perfectly with the vibrant costumes of the actors and background dancers.

Another one of Kher’s songs was shot in the city of Jaisalmer. This slow number with Kailash’s extraordinary vocals will surely remind you of your forgotten lost love. The singer says, “For me, Rajasthan ki mitti (Rajasthan’s soil) will always remain at the top spot for shooting my music videos. Rajasthan se mera pyaar na toh kum hua tha, aur na hi kabhi kam hoga. Same, sir, same!

This song is from the movie Paheli, which itself is based on a Rajasthani short story written by Vijaydan Detha. Rajasthani folklore comes to life in this song. It is shot in one of the finest heritage hotels, the Narain Niwas Palace in Jaipur. And it has two superstars – Shah Rukh Khan and Rani Mukherji, need we say more?

From the film Hum Saath Saath Hai, this romantic song is still played on a loop even today! Its authentic Rajasthani language used and energetic signature step is copied a lot. The song is shot in one of India’s largest forts, Mehrangarh Fort, Jodhpur. Here, the Hollywood action-thriller, The Dark Knight Rises was also shot.

This quirky romantic song with a herd of different colors is from the movie Bol Bachan. It is shot at the village resort in Jaipur called Chokhi Dhani. The costumes also have rich ethnic Rajasthani influence. While the movie will have your stomach in knots, this song will make your heartache! Plus points for Himesh Reshammiya’s voice!

Nothing speaks of pink city like this song! This catchy bop from the movie Shuddh Desi Romance has shown the whole city of Jaipur. Hues of pink and ‘gulaal’ (powdered pink) fills the frames of the song. The video is shot at Jalmahal Palace, Hawa Mahal, Raj Mandir, Nahargarh Fort of Jaipur. If you want a virtual tour of Jaipur, this song is a must-watch! Watch a breezy performance by Sushant Singh Rajput and Vaani Kapoor.

We saved the most classic song for the last! A classic, Mughal-e-Azam stars Madhubala and Dilip Kumar in lead roles. The song depicts the Sheesh Mahal in Amer fort, Jaipur. It reflect’s Madubala’s everlasting beauty. Watch it for a love that never ends!

Rajasthan represents roaring love, and these romantic songs are enough proof. If you want to feel like a true Bollywood hero-heroine, do add Rajasthan to your bucket list of things to do after the pandemonium around the pandemic is over!

Follow Rajasthan Studio on Instagram for more amazing art and travel content. Reach out to us on email at contact[at]rajasthanstudio[dot]com. This blog is curated by Rajasthan Studio and written by Hemanshi Agarwal.