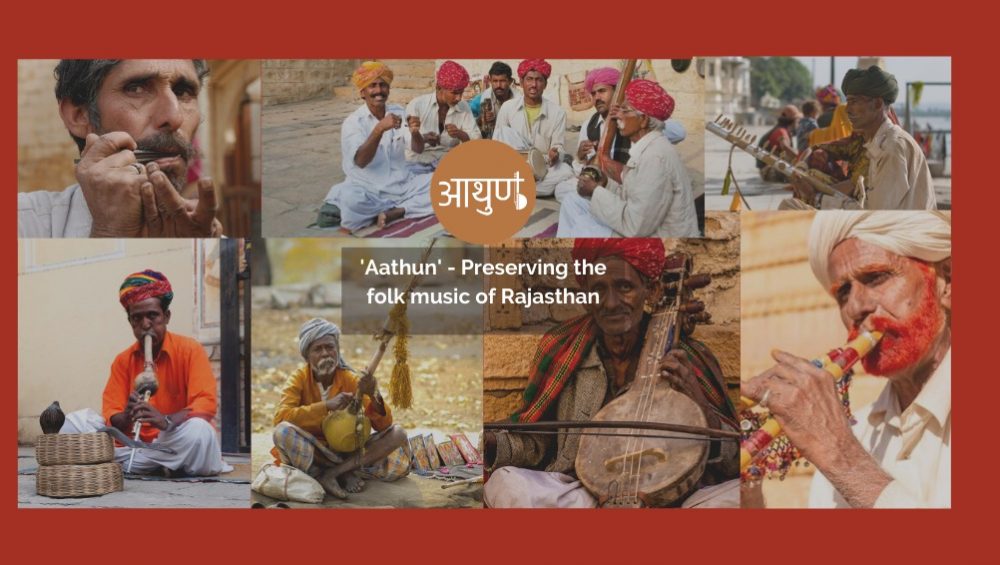 Aathun is a Marwari word which means the direction ‘West’. Undertaken by Rajasthan Studio, where you can book a myriad of art experiences, Aathun is for folk artists. The reason behind the birth of Aathun was to conserve the Rajasthani folk music culture. Rajasthan Studio aims to bridge the gap between the folk artists and their audience.

Our artists are connoisseurs of the local, Rajasthani musical instruments. However, these folk musical instruments are not very popular in the pop culture. From Alghoza to Pungi/Been, these artists will take you on a musical journey to the rich Rajasthan folk culture.

We introduce you to these instruments that will breathe life at Aathun.

The very name of the instrument, Ravanahatha – literal for Ravana’s hand, supports this tale to be its inception. The other names by which the instrument can found are Ravanhatta, Ravanhastha, and Ravanstron. Regardless of its name, the music produced Ravanhatha is sure to give you a glimpse of the lifestyle of the bygone era.

Kamayacha does not have much of the history associated with it. Historically, the oldest of the records about Kamaicha depicts its association with the tribal community of musicians- Manganiars (AKA Merasi). For generations, Merasis are playing this instrument for royals’ entertainment. Sakar Khan (aka Sakar Khan Manganiar) (1938–2013) was an Indian musician, considered by many as the greatest exponent of the Kamayacha.

Kamayacha, one of the oldest bowed instruments is the heart and soul of Rajasthani folk music. The base of the whole instrument is carved from a single piece of mature mango wood. The craftsman carves the basic shape and then goes on to refine and smoothen it using finer tools.

The origins of the Alghoza are unclear: some say that it originated in Iran while others claim it has Punjabi origins. Contrary to these opinions, Professor Zulfiqar Ali Qureshi—the only Sindhi to hold a Ph.D. in musicology — conducted a research and found that the Alghoza is 9,500 years old and it originated in Mesopotamia, Egypt.

Alghoza is a wind instrument, which consists of two flute-shaped recorders; the first produces high or heavy notes (sopranos) whereas the second generates thin or low notes (altos). Normally, the alghoza-nawaz (alghoza player) and music experts call the former a female sound and the latter a male sound.

Pungi is basically a snake charmer’s bread winning equipment today. Its origin comes from the genre of folk music instruments. It was popular in Badagutittu before fifty years approximately, often used during religious occasions as Nagaswaram in the south.

Pungi comes with variations in nomenclature as Been or Bin, Tumbi, Nagasar, SpurerBansi in the northern part of Indi. The same instrument is referred to as Mahudi, Pungi, PambaattiKuzhal in the south, mostly held by snake charmers to entertain people.

Ektara is an Indian Musical instrument, also known as Iktar, Yaktarogopichand, Ektar, etc. It is made up of a single string, played traditionally, not only in India but also in neighboring countries such as Bangladesh and Pakistan.

Historically, Ektara was a regular string instrument of wandering bards and minstrels from India and is plucked with one finger. It is a drone lute consisting of a gourd resonator covered with skin, through which a bamboo neck is inserted.

Originally, the art of playing Matka, another name for Gharha, had begun in Punjab, but eventually, the art found its way to the heart of the state of Thar Desert and had become an inevitable part of its folk culture. Similar art is prominent in southern India as well. There, the instrument is called Ghatam, and it constitutes a significant part of the Carnatic music system.

Like any other earthen pot of Indian style, Ghatam is also made up of mud with special attention given to the uniform thickness of walls so as to produce a good quality tone. Metallic fillings are added to the clay for producing the Ghatam that produces vibrating sound.

This Indian Jaw harp, also known as morsing, is a tiny wind percussion instrument played using the mouth and left hand. The rhythmic musical instrument consists of a metal tongue and metal ring in the middle and can create many patterns of sounds. Morchang was widely popular in Rajasthan, in the Carnatic music of South India and Sindh (Pakistan) in the 20th century. But it is hard to find now.

Bhapang is a single-stringed musical instrument. It is used for solo performances, and it is also an accompanying instrument for bhajans, spiritual songs, poetic songs, and folk songs. If you want to see the performance of Bhapang players, then the Alwar district of Rajasthan is the best place to visit. Here local folk musicians from the Mewati community still play the Bhapang in cultural festivals and tourist places.

Traditionally, Bhapangs are made of hollow gourd shells with the top and bottom part of the shell slashed away. The bottom part is then replaced by a flexible piece of leather, generally goat-hide. The leather is firmly attached to the bottom, giving the lower part of the shell the appearance of a typical percussion instrument. The center is then punctured and a string is passed through the leather piece to the other end, where a small bamboo piece is tied to it.

Sindhi Sarangi is attached to a legendary tale. The Rig Veda which is the oldest Indian text of the Aryan civilization contains a reference to the sage Kanwa who was imprisoned by demons. The revered man was blindfolded by his captors and cast into a dark dungeon. The sage had no problem complying with this order for though his eyes were shut, his ears were open. From the stillness of his dark cavern, he heard the sounds of a sonorous veena (the oldest string instrument in India). It was customarily played at dawn as a musical accompaniment to group recitals welcoming the break of a new day.

The Sarangi consists of squat, truncated body. The classical sarangi is carved out of a single piece of hardwood. The instrument has a roughly rectangular slightly waisted body- a goatskin face on which rests an elephant-shaped bridge of ivory or bone and broad fretless neck. The strings are suspended by four bone bridges: one bridge carries the playing and the sympathetic strings through different notches, the second bridge raises the main playing strings approximately half-an-inch above the instrument.

Khartal is usually the instrument of the Langas and Manganiyaars tribe of Rajasthan. The instrument is not just about hitting two wooden pieces to create a tone but to get the required sounding from the blocks. One can hear the sound of Khartal in the backdrop of devotional and folk songs. However these days, it is also played like a solo instrument.

Also follow Rajasthan Studio on Instagram for more amazing art and travel content. Reach out to us on email at contact[at]rajasthanstudio[dot]com. This blog is curated by Rajasthan Studio and written by Prarthana Asiia.