30 Memes Every Rajasthani Can Connect To 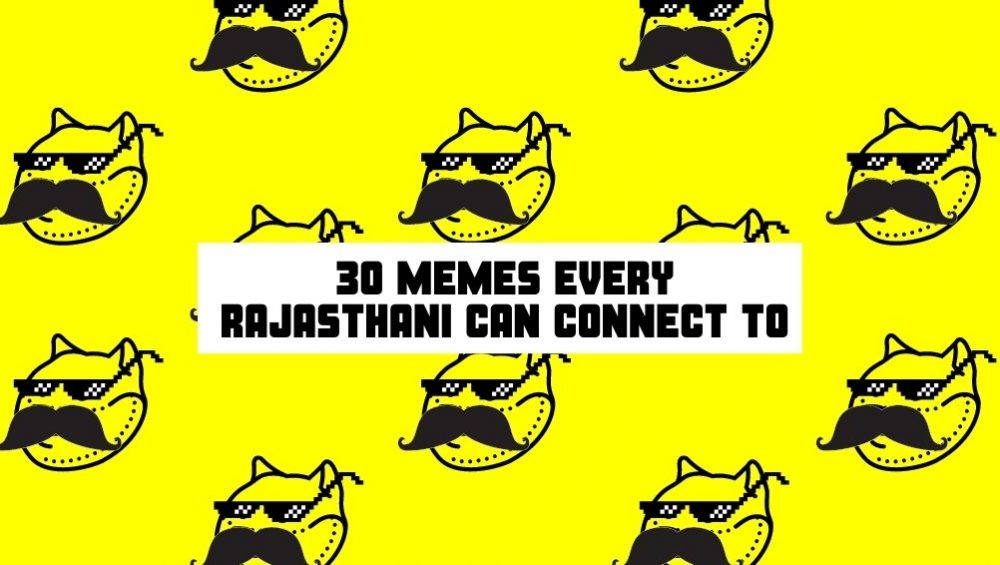 Memes Every Rajasthani Can Connect To: Have you ever received a disapproving look for laughing at your phone? It is the most embarrassing situation when you get caught laughing at your phone in public. Memes have this hysterical effect not only on millennials and Gen Z but also on older people. These hilarious memes give a positive stand to all the trolls.

From human rights to the crashing economy, every affair is being subjected to humor. It is saving the users from a boring feed of news alerts, current affairs, and other joyless social media posts. Humour found its way to different levels where being subtle, sarcastic, dank, sharp, and self-deprecating is funny.

Today, everyone has that one group where a bunch of people gathers to share the funniest and dank memes of social media. You can never go out of categories when you’re talking about memes.

Memes made Facebook a little more entertaining, Instagram now has content other than selfies and fancy travel or food features. And let’s refrain from talking about Twitter where everything gets a start. We have gathered some of the most amusing and humorous memes related to Rajasthan. It represents the classic stereotypes, some cliches, and its tradition and culture. Social media without memes would be like Rajasthani’s without Kachori.

Here are 30 memes every Rajasthani can relate to:

This meme has have given many men a reality check for crushing on a girl who is way out of their league. With dank images of her brother, her father, her ex, her boyfriend, and you in a corner. All those poor guys out there facing this didn’t take long to catch on to the concept. This recreation of Rajasthani crush went on viral with many guys relating to it.

Rajasthan during several seasons has unexpected patterns of temperature changes. Tom from the famous Tom and Jerry animated comedy show is shown hot red during the daytime versus the cold frozen Tom during night time indicating the varied temperature of Rajasthan.

Is this the same State?

If you have visited the cities of Rajasthan you wouldn’t deny this meme. Water crisis and Rajasthani languages with varying dialects for different cities will surely make you feel yourself changing. With water scarcity and changing languages, it is no surprise to be memed endlessly for the same.

Abhishek Upmanyu in his stand-up comedy came up with an out-of-context sarcastic joke where he says, “Mai kya karu phir? Job chhod du?“. When Rajasthani’s drives a six seaters bike, this self-destructive meme is recreated where the car would prompt the exact same dialogue.

Never getting enough of Bhujiya

Rajasthani’s have a special place for bhujiya in their hearts and stomach as well. This meme clearly reveals that bhujiya is like a drug for all the Rajasthanis.

Marwari’s can go beyond your expectations sometimes. This hilarious meme is a little too much though. Mango seed is used as a hair clip by drying them and later applying makeup on it for a better look.

A perfect meme for all the Rajasthani Rajputs using Hukum in every sentence. Hukum is a term spoken immensely by Rajputs out of respect for their elder ones when replying. You may lose count of how many times they use Hukum word in every conversation.

Fatehsagar is the most popular and mesmerizing spot for tourists as well as for localities in Udaipur. The nightlife is frequented with a maximum crowd for its beautiful scenery, for a drive around the lake, and for joyful outings. While you may hardly see any of these during the daytime. Less visited during working hours and totally making sense with the meme.

All the people who are fond of alcohol can go bonkers when they see dozens of alcohol bottles for them. This apt meme is sketched perfectly with the famous Bollywood song “Yeh To Sach Hai Ki Bhagwan Hai”. It can surely relate to all the Rajasthani’s who love alcohol.

The PUBG ban was this year’s biggest meme, and all the content creators did not slack in contributing to it. All the PUBG players outraged and showed their concern and dismay on the internet. But this is what our unknown PUBG players had to say for the ban. Watch the video here.

One of the best and most viral dialogue “Abba nahi maanenge?” of 3 idiots became a sensation overnight. Many Udaipurites after staying in Udaipur during the covid pandemic did not want to leave this beautiful city.

This may happen when you choose the wrong words when you are in Pushkar. This witty pun about when you say ‘bhaiya gadi ko push karna in Puskar‘ won’t stop your laughter.

These are some of the most popular and sarcastic stereotypes you should not miss about Rajasthan’s culture and tradition. Watch the video here.

When talking about Rajasthan, it is impossible not to mention Dal Batti Churma. It is one of the most delicious and traditional delicacies of Rajasthan. Once you have Dal Batti Churma there won’t be any space for other food items.

This craze of Pre-wedding shoot has been around for a while, but Rajasthan is a hotspot for pre-wedding shoots. This may happen to all those wannabe kids.

This entertaining meme will surely give you a loud belly laugh. Pankaj Tripathi with his lively act made it look fantastic. Watch the video here.

This one surely scores extra points when you are newlyweds. When you are just married and cannot bear the thought of leaving your parents. Truly an amazing and hilarious meme. Watch the video here.

To all those Rajasthani’s Rajputs who pursued engineering but later ended up in Dukkan. Rajasthani won’t back off from engineering, but they may when it’s about the job.

Payment methods have left no options. This nut cracking meme has become an internet phenomenon of getting pooja rituals done even through e-payment.

We can’t miss talking about a hard-to-decipher comparison between two famous cities of Rajasthan. Jaipur and Jodhpur are both popular and known in its own way. Though Jaipur triumphs for its recognition as World Heritage City.

The Expectation vs Reality meme of Neemach Mata Temple in Udaipur is dank. The famous and timeless dialogue of the Bollywood movie “Yeh Jawaani Hai Deewani” is exactly what you expect before climbing Neemach Mata Temple. But the reality can get into your nerves. Watch the video here.

Only Rajasthanis could relate this well when talking about its hot temperature. All those cool Rajasthani’s trying to get used to the increasing temperature.

Rajasthan faces water scarcity and diminishing drinking water resources. Based on that numerous memes are developed and shared. This sarcastic one is recreated from the Bollywood movie “Welcome”.

Ambrai ghat is the most popular lake located near the waterfront of Lake Pichola in Udaipur. It is mainly visited by localities and tourists, but this meme is also giving an apt reality check.

Though there are many attractions in Jaipur, very few people would visit the same place again and again. The Jaipur people are limited to cafes and restaurants at weekends. Also when cafes are bored they have WTP Mall for their rescue.

After this meme, we won’t deny calling Marwari a funny language.

Many Marwari girls prefer boys having dukkan than jobs. This meme is for all the Rajasthani poor boys working hard to get jobs, but don’t know what lies for them in the future.

Once again the Rajasthani temperature is trolled when 41.1°C kills 65 people in Japan. It is a self-deprecating yet hilarious meme developed from stand up comedy by Biswa Kalyan Rath.

When you get all prepared and equipped to get married after seeing a typical Rajasthani girl performing household chores.

When you are a foodie in Jaipur and Ghewar is everything. No Rajasthani would regret choosing Ghewar over Waffles.

Also follow Rajasthan Studio on Instagram for more amazing art and travel content. Reach out to us on email at contact[at]rajasthanstudio[dot]com. This blog is curated by Rajasthan studio and written by Hitanshi shah.