Rains In Rajasthan: A Blessing Or A Curse? 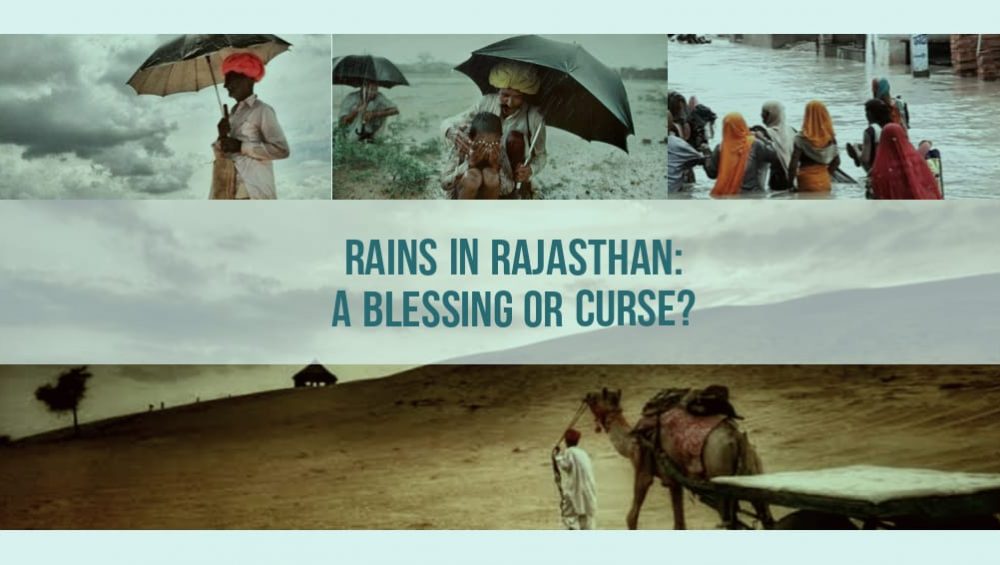 In August of 2020, Rajasthan has been receiving heavy rainfall. The meteorological department has confirmed that on August 15 itself, Jaipur received 18 cm rainfall. This was followed by other cities like Amber (15 cm), Bassi (13 cm), Ajmer (11 cm), and many more. Many areas have been on high alert.

In school, we have always been taught in geography that Rajasthan is an arid region. We also know that rains benefit every region geographically, socially as well as economically. Then, why is it that more rains in Rajasthan are not good news?

Rains In Rajasthan: A Case Study

Farmers in the Chhota Narena region of Ajmer have been receiving heavy rainfall this year than they did years ago. Yet, they’re able to grow only two bags of Jowar this year instead of their regular yield of 20 bags. This is because rains have altogether been irregular. It follows a pattern of one year of unusually heavy showers, followed by long dry periods. This erratic spell with new peaks and lows adds stress to agriculture.

Agriculture generates a small amount of our GDP or gross domestic product, namely 18% but it sustains half of India’s population. And out of that, half of all agricultural farms (mostly in rural areas) depend on rainfall as their main source of irrigation. When there is extreme rainfall, crops are unable to survive it and as a result, disruption ensues. It also increases the risks of floods.

There are unforeseen circumstances that shock the terrain permanently. The Sambhar lake in Rajasthan was once India’s largest saltwater lake, but it has now dried up and there is nothing but cracks to see on it. Not only this, but satellite image data reveals that several lakes and ponds have dried up around Jaipur.

But if rainfall has been on the rise, why are these lakes drying up?

Let us take the analogy of a potted plant. If we water a plant slowly, it trickles down to the roots and continues to nourish it. But, if we flood the pot by putting excess water on it, most of the water will drain off instead of percolating.

Similarly, short but heavy spells of rain flood the ground causing the water to run off instead of seeping into the land and becoming groundwater. Lakes are recharged by either groundwater or rainwater, and Rajasthan lacks both. It does not even have proper rainwater harvesting infrastructure in place to make use of the rainwater for future dry spells. And with rising temperatures in Rajasthan, it is not only unable to capture the water from the clouds, but also the water it has already accumulated. This results in water shortage and stress on agricultural crops.

Rains are supposed to clear the air too, but dust remains in the air for longer as it rains for a lesser number of days. Healthy irrigation moistens the soil and binds it, negating the effect of dust and pollution. But lack of both rainfall and groundwater increase pollution too, and the winds of Rajasthan carry it to other cities on the Indo-Gangetic plains.

Yes, it is true that one can’t control rainfall but there are some factors which policymakers need to pay attention to. Instead of just focusing on supplying water to hand pumps in villages during the election cycle, the government needs to invest in water harvesting technologies. Also, the effects of climate change should be an important agenda in conversations. This way the people of Rajasthan, like other cities, can sit, enjoy a cup of tea while rains are showering over their land instead of worrying about the destruction it will do to their crops.

Also follow Rajasthan Studio on Instagram for more amazing art and travel content. Reach out to us on email at contact[at]rajasthanstudio[dot]com. This blog is curated by Rajasthan Studio and written by Hemanshi Agarwal.