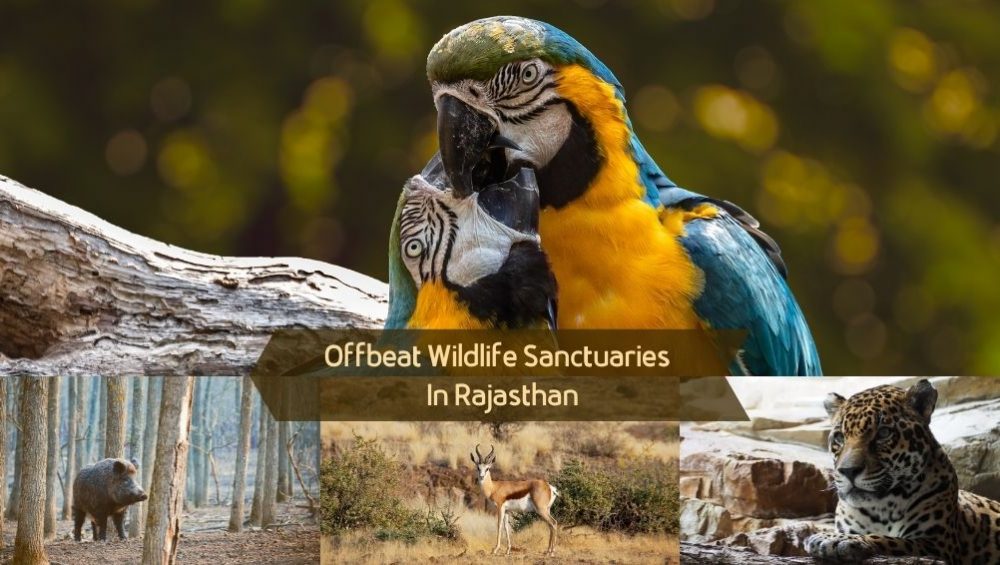 A wildlife sanctuary is a natural reserve or a bio reserve to protect and safeguard the flora and fauna of that particular area. A trip in the lap of nature means everything. This includes the aura of the place, the smell and the noises made by the animals. Also, as a responsible tourist, be certain to not trammel the land of plants and animals.

Here are 10 wildlife sanctuaries for you to discover:

Situated in an approximate area of 52 km in the Udaipur district of Rajasthan, it surrounds the Dhebar or Jaisamand lake. Maharaja Jai Singh created the Dhebar lake in order to divert and utilise waters of the Gomti river. As a deciduous forest, it is home to four-horned antelope, wild boar, panther, deer and many migratory birds.

Phulwari ki Nal means abode of flowers. Located on the banks of the River Sabarmati, in the middle of the Aravalli Hill Range in Udaipur, welcomes people to a water view. The flora and fauna are rich on the banks of the river. A host of medicinal plants, fungi, and algae can be found here. Be ready to come across sloth bears, crocodiles, wild boars, and leopard on your way. This sanctuary is also rich in bamboo resources. Add it to your itinerary!

Located in the rural village of Churu, just a few kilometers away from Jaipur, it is an ecosystem for protecting the endangered blackbucks. It is a grassland that has refound itself in Rajasthan. If you are planning a weekend getaway, this is one of the best places. Also, spot the migratory birds from Siberia and nearby countries, chinkara, and desert cats.

Jorbeed in Bikaner, Rajasthan is a paradise for bird watchers. Vultures, raptors, and migratory birds- this is a dream sanctuary for wildlife photographers! The variety of birds that one can see are Steppe Eagles, Griffon, and Egyptian Vultures, and crows. Jorbeed is regularly made up of their appearances. If you are lucky enough, you may be able to spot the yellow-eyed pigeon here.

Historical texts and mythology affirm that Sitamata Wildlife Sanctuary is the same place where Sitamata stayed on exile in the Ashrama of Valmiki. She also delivered Luv and Kush here. There is also a Sita temple in the sanctuary. This place was declared as a protected forest or sanctuary by the Government of Rajasthan in 1979.

Van Vihar Wildlife Sanctuary is one of the lesser-known reserves of Jaipur. Some 18 km away from Dholpur, it is home to many animals. You can see leopards, blue bulls, hyenas, and chitals. If you are feeling adventurous, Ramsagar lake in the interior of the sanctuary will allow you to take a glance at crocodiles and water snakes.

Bassi wildlife sanctuary is situated in Chittorgarh. It has everything from flora including medicinal plants to fauna including different types of birds. This sanctuary is spread across the western part of Vindhyachal Mountain ranges. Come here to see panthers, hyenas, jackals, white boars and if you are a bird lover, get ready to see several migratory birds.

Surrounding the artificial Ramgarh lake in Jaipur exists the Jamwa Ramgarh Wildlife Sanctuary. The lake, however, dries up during the peak summer days. However, it floods easily during the monsoons. One can spot a wide variety of animals and birds: jackals, mongoose, leopards, lions, doves, drongos, woodpeckers, tree-pies and so much more.

Situated near the town of Jaisalmer, the Desert National Sanctuary is one of the sanctuaries in the Rajasthani taste. It has a great tourist attraction every year. The sand dunes are a true essence of the Rajasthan desert ecosystem. From plant and animal fossils collection, there is an immense crowd of birds that can be seen here. Spot vultures, endangered Great Indian Bustard, falcons to blackbucks, Bengal foxes, hedgehogs and desert foxes.

Follow Rajasthan Studio on Instagram for more amazing art and travel content. Reach out to us on email at contact[at]rajasthanstudio[dot]com. This blog is curated by Rajasthan Studio and written by Prarthana Asiia.