Dialects Of Rajasthan And Its Cultural Significance 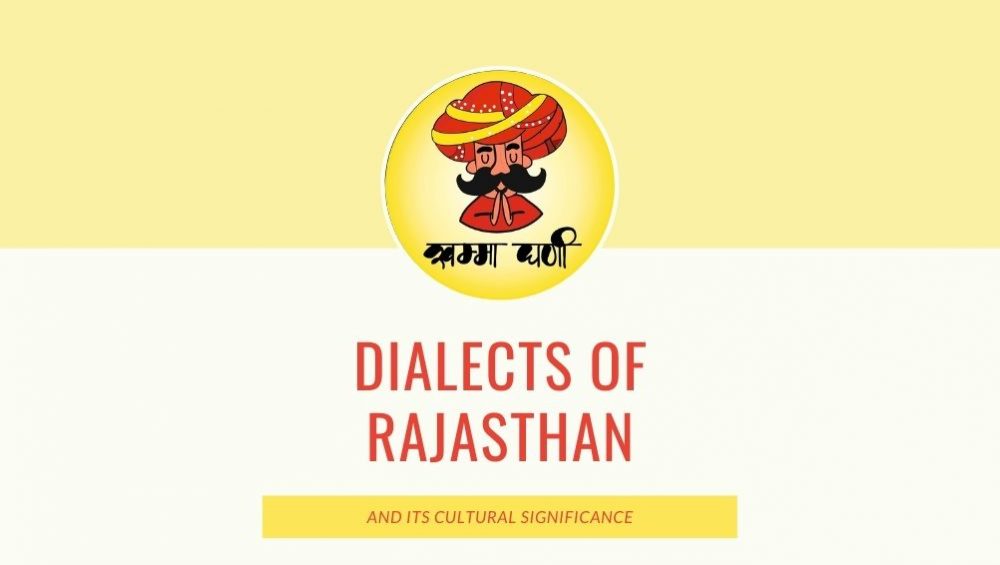 Dialects of Rajasthan: Rajasthan is the largest state in India. It is home to royal and tribal communities. Known for its royalty, friendly people, delicious cuisine, art, culture, literature, picturesque places, deserts, palaces, wildlife, the list is just endless. One thing that makes this state important and popular is its hold over culture. Even today, the state is pretty traditional and authentic.

Throughout the years, their lifestyle, food, and festivals are within their cultural heritage. However, one of the main factors that differentiate its people from the rest of the world is the distinctive dialects they speak.

The Dialects of Rajasthan & its Culture

Rajasthani is a western Indo-Aryan language. Most importantly, it constitutes various dialects, primarily concentrated in Rajasthan. Therefore, people follow a method of communication deeply embedded with the culture they follow and practice. It’s a result of the state’s long history. Also, this history spans over the past many decades, starting from its origin.

Then, several princely states merged to form Rajasthan. This gave birth to several dialects used by the people. A scholar, George Abraham Grierson coined the term ‘Rajasthani’ in 1908 as the state’s language, before which its various dialects represented the language. The script for Rajasthani is in Devanagari, with 10 vowels and 31 consonants.

Throughout its geography, there are various dialects in Rajasthan. Read about some of the dialects in the next section.

Firstly, Marwari is the most common dialect in Rajasthan. Historically, it was Mahajani script but now, written in Devanagari script. The Perso-Arabic script is the script for Marwari in Pakistan. According to popular belief, Gujarati and Marwari originated from Maru-Gurjar or Gujjar-Bhakha, which is the language of the Gurjars.

It is the eastern form of the Marwari dialect that people in the southeast of the region of Mewar speak Mewari. The areas that come under this dialect are Chittorgarh, Rajsamand, Udaipur, and Bhilwara. The dialect follows the SOV sentence format. So, every sentence has the subject, in the beginning, followed by the object, and then the verb.

After Marwari, Dhundhari or Jaipuri is the most common dialect. The districts that fall under these portions consist of Jaipur, Kota, Ajmer, Bundi, and parts of Kishangarh. There is no tradition of communicating this dialect by writing it. Devanagari script represents it.

Shekhawati has made good contributions to Rajasthani linguistics. People usually speak Shekhawati in the districts of Jhunjhunu, Sikar, and Churu. It’s a very important dialect historically. It stems from the Shekhawat’s dynasty in northeast Rajasthan, which lasted from 1445-1948. This region boasted of rich history and good influence in the grammatical and literary fields. However, there were not many contributions to the Shekhawati dialect.

Mewati is used in the northeast of Jaipur, that is, in the Alwar district and its surrounding areas. Originally, Mewati is the language of Mewat, home of the Meos. Mewati is similar to the Braja Bhasa, a dialect used heavily in the Bharatpur district. British geographer James Rennell discovered the earliest use of the Mewati dialect.

Indians and Gujjars of Nothern Pakistan speak Gujari. Most importantly, the Government of Jammu and Kashmir has recognized this dialect. Its widespread use there is the reason. Also, the Consitution of the region includes Gujari into the sixth schedule. In conclusion, several historians and researchers believe that Gujari is the origin of Rajasthani dialects.

Widely used in the Ahirwal region, Yaduvanshi Ahirs used this dialect, hence the name Ahirwati. It’s commonly thought to be a part of the Mewati dialect. However, it’s similar and related to the Shekhawati dialect. Also, it is similar to Bagri and Bangru. Ahirwati doesn’t possess a specific script. Varying by its region, it is written in Devanagari, Perso-Arabic or Gurmukhi.

A scheduled tribe, Bhil is where the name Wagdi comes form. This signifies the use of weaponry as a characteristic of this tribe. The people who speak Bhili refer to themselves as Wagdi speakers. Rajasthan, Gujarat, Maharashtra, and Madhya Pradesh are the states of Wagdi. In Rajasthan, the districts with the most Wagdi speakers are Dungarpur, Banswara, and Udaipur.

The Lambadi dialect originated through the Banjara tribe people, who were nomads that traveled around India. It’s a spoken language and doesn’t have a native script. For the Banjara of Maharashtra, the dialect is in the Devanagari script. The script shifts to Kannada and Telugu consequently with the shift in regions from Karnataka to Tamil Nadu and Telangana.

Firstly, the Malwa tract of India follows the Malvi dialect. Secondly, this area consists of Bhopal, Mandsor, Indore, and Ujjain. The southern parts of Rajasthan usually speak Jaipuri and Malvi. Although, dialects like Marwari and Dhundhari originated within Rajasthan, but Malvi originated outside the state by the Malwa tribe.

In Rajasthan, Bagri is hugely popular in its northern parts. Moreover, the people of southern Punjab and north-western Haryana also speak Bagri. Also, it gets its name from the north-west Indian region, Bagar tract. The dialect has only slight differences compared to the language spoken in adjacent parts of Haryana and Punjab. Hence, Bagri acts as a dialect bridge between these two states and Rajasthan.

Firstly, the areas that were part of former Sind, like the western portions of Jaisalmer, Thar, and Barmer use the dialect called Thali in the north. In the west, this dialect is called Dhatak, and in Bikaner, it’s Bikaneri. Also, it closely resembles the Marwari dialect. The majority of the people who speak in this dialect reside in Sindh, Pakistan and only some are present in India.

The Nimar region speaks Nimadi. This region encompasses parts of Rajasthan and Madhya Pradesh. Similarly, areas like Khandwa, Burhanpur, and parts of Dhar speak Nimadi. Also, writers like Gaurishankar Sharma and Ramnarayan Upadhyay have gained a lot of recognition for their work in Nimadi.

What makes Marwari the most widespread dialect?

In conclusion, Marwari is the most widespread dialect among all the dialects that come under the Rajasthani language. Hence, it is also the most popular dialect. Also, there are more than 7.8 million speakers of Marwari. Most of these people are in Rajasthan. Also, western Rajasthan consists of a mix of Marwari and other dialects. Most importantly, it is not surprising that many people think Marwari and Rajasthani language are the same. However, Marwari is just a dialect of Rajasthan

Also follow Rajasthan Studio on Instagram for more amazing art and travel content. Reach out to us on email at contact[at]rajasthanstudio[dot]com. This blog is curated by Rajasthan studio and written by Deepti Parmar.