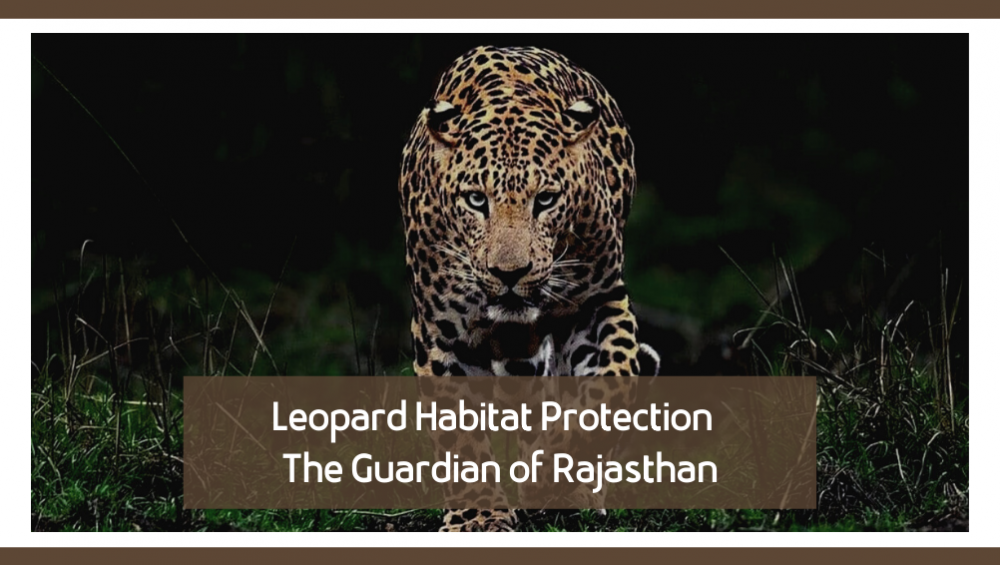 Leopards have been a part of Indian history for as long as we can remember. The folk tales and children stories that we heard growing up, leopards stories have been prominent in our life.

One of the most famous depictions of the Indian leopard is in the story of Mowgli. This world-renowned story has a character named Bagheera, a black panther, which raises and protects Mowgli, a human child. A black panther is actually a leopard who has melanistic skin, so its whole skin is black, just like its spots.

These big cats are commonly seen out and about in many parts of the country. Rajasthan is the most common of these states to sight leopards. The Indian leopard has finally started to receive the recognition that it very well deserved. Safaris have become a popular tourist attraction, with some parts of Rajasthan even providing a guaranteed leopard sighting.

In the feline family, tigers are the public’s main focus when it comes to preserving wildlife. Indian leopards have hence become endangered and list among the top unsafe species. The magnificent cats are gaining proximity to human habitats, putting them more in danger. Animals don’t understand the rules and regulations of humans, nor the dangers of entering their housing areas. But the decrease in their natural habitats gives them no choice but to travel farther and risk their lives.

What’s special about the Indian Leopard?

There are nine recognized subspecies of leopards that are spread across Asia and Africa. The Indian leopard or common leopard is the smallest amongst all but possesses the ability to easily adapt to its surroundings and environment.

They hunt during the night and rest on trees during the day, a common feature for this nocturnal species. They’re strong, agile, and extremely lithe. They use trees as safe ground, usually resting on high branches, even bringing the captured prey on trees. For the necessary movement and travel, you can see them on land mostly.

Current Threats for the Leopard Population

Wild beasts like leopards get killed due to several reasons, but the most common is their proximity and interaction with humans. Like many wild animals, these animals are also victims of losing their habitat. The reasons for it vary from deforestation, uncontrollable poaching, unregulated tourist activities, and increasing construction in forest areas. When faced by one or many of the above circumstances, leopards tend to stray further from their homes, coming into closer contact with human settlements.

Their skin is a highly sought after and expensive accessory. Home decor is one of the reasons. This leads to their illegal poaching. The fact that there’s no proper calculation of their population adds to the issue. The first official leopard census was done in 2015 that said there are 7910 leopards found in the protected tiger reserves. But the number of leopards in unprotected areas weren’t counted, which in itself could be around 4k-6k more. Rajasthan has several unprotected zones that inhabit a good leopard population. Since these aren’t part of a national park or sanctuary, controlling tourism in them is impossible.

The Indian leopard is listed under Schedule 1 of the Wildlife Protection Act, 1972. This provides them with absolute protection. It’s listed as ‘vulnerable’ on the International Union for Conservation of Nature Red List, with the 2017 Wildlife Animal Census counting them at 507 in Rajasthan. According to the latest update, 45 leopards died in the state in 2019; many of which were due to road accidents, electrocution and other man-animal conflicts.

The Land of Leopards and Humans

Wild animals and humans living together in peace and harmony seem like a set-up from a fictional show or movie, doesn’t it? The thought of such a story getting true is close to impossible, especially now, since the onslaught of modern technology. Bera, a small village in Rajasthan achieved this impossible feat. They found ways beyond the normal to live in harmony with their leopards.

For starters, the villagers there didn’t use any modern technology to understand or tame the wild cats. It’s the unwavering belief in their Lord and his ways. They also believe that the beasts have adapted to their presence and live accordingly. These animals are such a common sight that the tourist packages there even come with a quote of guaranteed Leopard sighting. On the contrary, in cities like Delhi and Mumbai, leopard sightings mostly lead to their death as they’re in close proximity and more often than not, attack and harm humans.

Why Rajasthanis Worship The Leopard:

One of the tribes that religiously worship them in Rajasthan is the Rabari tribe that occupies Bera. They are followers of the Hindu Lord Shiva and believe that Lord Shiva and Goddess Parvati created their tribe thousands of years ago. They also believe that these animals are their guardians and savior. Since they are a shepherding community, livestock is in abundance in the village. Whenever leopards attack their livestock, they believe it’s a sacrifice for their Lord Shiva, and that he’ll bless them with more cattle.

The Rabari tribe worship their leopards as guardians and wish for their well being. These leopards in return haven’t harmed a single human being. There was a child that was taken away sometime back, but it was left in the bushes safely. These guardians freely roam around the temples and nearby human population, but the Rabaris aren’t afraid of them.

Rajasthan has launched India’s first Project Leopard, an initiative to protect and preserve leopard habitation. A budget of 7 crores is set for this project. The project started with a leopard reserve within the Jhalana Forest Reserve in the year 2018. The aim of the project was to serve as a watch and curb unregulated tourist activities in protected and unprotected areas so that the animal and their habitat isn’t harmed.

Efforts are taken to improve the relations between humans and leopards, like in Bera by taking care of any problems that threaten these wild cats. The project also includes initiatives to train and provide jobs to local communities. All in all, the leopard habitat protection project will serve as the bridge between humans and animals.

Follow Rajasthan Studio on Instagram for more amazing art and travel content. Reach out to us on email at contact[at]rajasthanstudio[dot]com. This blog is curated by Rajasthan Studio and written by Deepti Parmar.