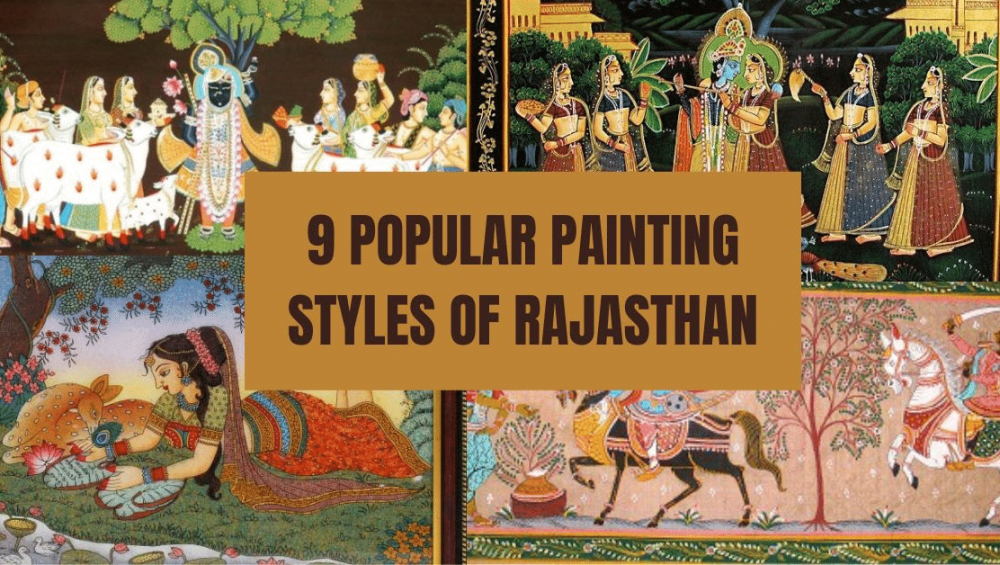 Rajasthan has always been a colourful state, and these have always reflected in the various styles of paintings that have originated from the state. Let’s explore some of the popular painting styles of Rajasthan !

Phad paintings are a seven hundred year old technique that has been passed down generation to generation. Its origins are in Bhilwara, Rajasthan, Hence they are scroll paintings that narrate elaborate stories about religion. And mainly about the deities the local population of a region worships. They are widely recognised as “mobile temples” as phad artists would popularly travel with their paintings. Also they narrate some story about the deity in the painting accompanied with singing and dancing.

Many miniature painting artists today are known to have learnt this style from their older generations in the family who worked as painters for the kings. However, this style was started in the 16th century and what makes it stand out is the incredibly fine detailing and enchanting narrative they portray. Another distinct feature about these paintings is that they are only sometimes drawn on paper. Other times they are drawn on ivory! Because they are ‘miniature’ in size, the brushes for creating these paintings require really fine bristles which are made from either a few strands of a squirrel tail or from feathers of birds. Even today, only natural colours are used for these paintings.

Fairly recent compared to the rest of the painting styles, the gemstone paintings can only be traced back to the last two hundred years. While there are cheaper -artificial stones – versions available as well, the original version used semi precious stones instead of paint to add colour to the painting. Since Rajasthan has always had a large repository of semi-precious gemstones like agate, blood stone, amethyst, citrine, carnelian, jade, tiger, malachite, and others, this painting style was almost bound to pop up. These semi precious stones are carefully selected, and grounded to a paste to act as paint. They are then applied on marble or an acrylic or glass sheet.

Kajali is a less heard of ancient style of painting. It is more popular in the eastern parts of the state. The word comes from ‘kajal’ which means carbon black. Apart from a grey colour, no other shades of colour is incorporated into Kajali paintings. Hence, the interesting and most distinct characteristic about this style is that no paintbrushes are incorporated in the process. Therefore, the paintbrush is replaced with a hand and cloth. The kajali is obtained from the soot of the burning oil lamps. The paper for this style is laminated with a cream base so the colour is absorbed better.

Pichwai paintings generally focus on a Krishna deity, and are therefore found predominantly on the walls of temples or behind the deity. These paintings are still done only with natural colours, although the natural paintbrushes have been replaced with cheaper and artificial ones. While wealthy families would purchase huge backdrops for their deity at home, lesser wealthy families would only be able to afford smaller versions that would be placed beside their deity.

These paintings were made from paint made from minerals. And some say this style of painting was the inspiration for gemstone painting style. But that stance is debated as this style is also just 200 years old. Hence, they are inherently relatively crowded paintings as they would depict elaborate religious themes. Right from the ornamented temples and depictions of patrons and their families. However they change to the names of the painters, these paintings included everything. They would also employ a technique called Usta, wherein the painters would emboss gold and silver to enhance the paintings.

This 18th century is named after the princely state of Kishangarh where it originated. This style is clearly distinguishable through the way it depicts faces. Features are sensitive and refined, except the chin, eyebrows and noses which are drawn sharply. The hair almost looks like serpentine locks of hair. These paintings also have large panoramic backgrounds to add to the rest of the painting.

These paintings originated from the devotees of Krishna and are deeply rooted in folk culture. When it first originated, it was practised only by the priestly upper caste. And now it is almost extinct and is practised only by a select few. To create a Sanjhi design, stencils are created by hand and then placed on a flat surface where it is replicated on paper.

Bani Thani was a widely loved singer and poet in Kishangarh. A group of Rajasthani paintings were dedicated to her and Raja Samant Singh, who abdicated his throne to retire to a comfortable life. This school of paintings would replace Radha and Krishna with the King and Bani Thani. The features of these paintings are similar to the Kishangarh school. And one of her paintings was also used as an Indian postal stamp!

The people of Rajasthan have a gift of creativity, hence as shown from the diverse styles of paintings we just explored. You can first hand explore some of these through our masterclasses.