The Story of Nathdwara Temple and Pichwai Painting ! 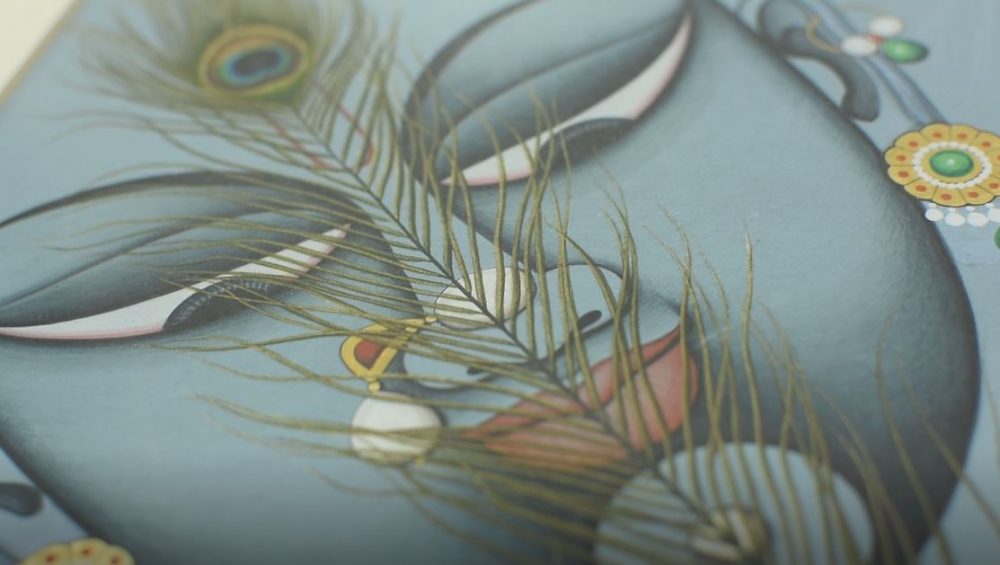 Jai Shree Krishna! Or Jay Thakorji is said before beginning the Pichwai artwork.Pichwai paintings are a form of artistic devotion to Lord Krishna or his another form Lord Shrinathji. Let’s understand the beautiful correlation between the story of Nathdwara temple and Pichwai painting.

Nathdwara literally means Gateway to the Lord.As the legend passed over generations, a cow named Chandravalli climbed the Govardhan hill(situated in Mathura,Uttar Pradesh) every day. The shepherd observed this every day. He was very curious about the cow’s sudden separation from the herd to climb the hill while grazing on the grass patch. The shepherd discovered that a hand of Lord Shrintathji was emerging from the stone. The flow of cow’s milk reached the stone .The shepherd informed Shri Vallabhacharya.Shri Vallabharchaya, immediately started worshipping the deity. The devotees created the idol. Also,formal arrangements to worship began. Shri Vallabarcharya established Pushti Marg, a tradition to worship Shrinathji.Lord Shrinathji, is a 7 years old incarnation of Lord Krishna. The traditions and rituals Firstly, people worshipped the image of Lord Shrinathji at Govardhan hill in Mathura.

In 1665, Aurangzeb caused a massacre destroying many Hindu temples. The Mughal army reached Goverdhan to destroy it but the devotees showed him the titles and offerings received from past Mughal rulers. As a result, they shifted the idol to Agra for six month.

Again, the devotees shifted the idol. Mahrana Rajsingh of Mewar was the only king who didn’t fear to shelter the idol safe in his own kingdom. As the idol was on the way to Mewar, the wheel of the bullock cart got stuck in Sihad. Sihad is a village on the bank of river Banas. This was an omen about God’s willingness to construct his temple in that place. Soon the buzz spread and the popularity of the temple had no bounds.

Nathdwara is situated at a distance of 45 KMS from Udaipur. One must reach Udaipur. Subsequently, hire a cab or local transportation to reach the town of Lord.

The origin of Pichwai Painting:

The word Pichwai belongs to the Sanskrit language. Pichwai is a combination of two words ‘Pich’ meaning behind and ‘wais’ meaning ‘hanging’. Pichwai paintings date back to the 16th century (400 years old). The artisans started Pichwai painting to decorate the walls. This was a subtle form of storytelling about the tales of Lord Shrinathji.

Artists saffron, gold, silver, zinc, coal, indigo, natural colors and dyes were used to color the artwork. Starched cotton cloth chosen as the base for the Pichwai painting. The major motifs were of cows, lotuses, Gopis , Radha Ji, peacocks and trees. Artists previously used goat, horses and squirrel hair to make paint brushes. Specifically, the motifs of cow reminds us of cow Chandravalli who took the devotees to lord. Therefore, there is a strong correlation between The Story of Nathdwara Temple and Pichwai Painting.

Are you fond of the detailed elements in an artwork? Are you waiting to learn a new form of painting? Finding something interesting other than oil or acrylic landscapes? Learn Pichwai Paintings with Rajasthan Studio! Flabbergasted! You read it right! Bingo! Even you can learn the painting style seen in the temple shrine. Exciting news! Get trained personally from the artist who is adept at it. Hakuna Matata! Get all of it at one click.

What is a Masterclass Workshop?

Rajasthan Studio has specially curated personalized Masterclass Workshops. This ensures the privilege of one to one learning from the expert artists. We only take limited seats in each workshop. Not only you can understand the art technique vividly but also practically do it along. Take back best of the learnt skills and art pieces.

Nathdwara painting school is the major school where Pichwai painting is still taught through the tradition of Guru-Shishya Parampara. A master teacher teaches a set of disciples. These disciples teach it to their own set of pupils. Likewise, Master artists guide their students to paint a long Pichwai painting. He manages the junior artists assisting him.

The paintings are now not only restricted to the temple walls and temple shrine but also part of home decor like cushion covers, bed sheets, carpets etc. Additionally, artists use gold threads to embellish on the final artwork provide a regal look. Ras Leela, Annakut, Goverdhan Puja, Gokulashtami, Janmashtami, Nandostav, Diwali and Holi which signify the glory of this age-old tradition of painting technique.

Truly, Rajasthan isn’t the land of royals but also the land of artists- musicians, dancers or painters. Markedly, Bhakti movement and Sufi Movement have dominated influence over art history of the state. Above all, Lord Krishna himself willingly desired to get settled in the form of Lord Shrinathji, such is the purity of Rajasthan.