Goddess Bhadrakali – The Epitome of Strength And Fierceness 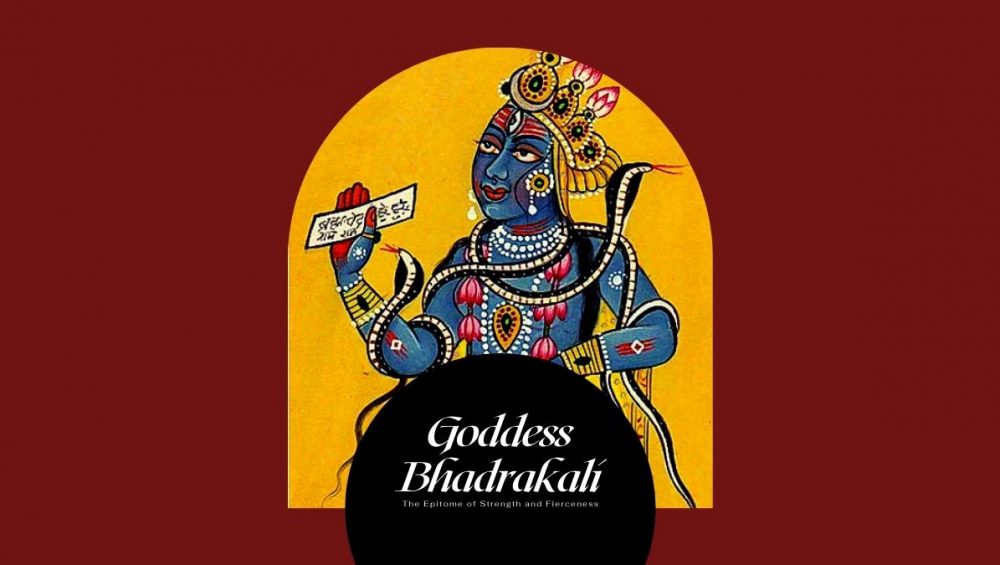 Goddess Bhadrakali is represented with three eyes and four, sixteen or eighteen hands. She also carries various weapons  like, trident, sword, arrow, discus, conch, bow, spear and a few more with a small tusk protruding from her mouth and flames flowing from her head.

The widespread temples of Goddess Bhadrakali

Right from Nepal in North India to Kerala in South India, and Gujarat in West India to West Bengal in East India, the Bhadrakali temples are everywhere. She is predominantly in the southern part of India, specifically Kerala and Tamil Nadu. Some famous temples of Goddess Bhadrakali are – Aattukal, Chettikulangara, Thirumandhamkunnu and Chottanikkara in Kerala, Mandaikadu and Kollencode in Tamil Nadu and Bhadrakali Temple in Warangal.

Incarnation of the Goddess

More about these incarnation stories here.

The Bhadrakali Painting originated in the 16th century and has been practiced by various artists since then. Moreover, the first painting dates back to the 1660s. It then began at the Pahari Miniature painting tradition in the small court of Basohli, located in the Punjab Hills at the  foot of the Himalayas. These were 70 paintings in a folio, each showing a different facet of the Goddess Bhadrakali.

In this painting, the artist has tried to depict both the benevolent nature of the Goddess as well as her fierceness. Here, the Hindu Gods is making offerings and worshipping Goddess Bhadrakali. Here, Goddess Bhadrakali is looking directly at the three Goddess Kali figures in front of her. These three are offering blooded swords, cups of skull filled with blood and a severed head. These venerate her tantric divinity. Standing behind her is Goddess Bhima along with Vahni Priya (companion of Agni, God of fire). There are also two figures of Shiva kneeling at her feet.

The Verses written behind the painting

There is a powerful verse behind the painting. In addition, it would have been used by a skilled tantric practitioner to evoke Goddess Bhadrakali. As translated by Vidya Dehejia in 1999 it reads,

Equal to a thousand rays of the rising sun

Her feet are worshipped by both [Bhairavas]

Accompanied by Bhima and Vahni-priya

adorned with the twenty-two letters

I adore goddess Bhadrakali with the seed mantra bhaim.

According to the Tantra Rahasya, the feminine form of the devi then arose from the north face of Lord Shiva. It is blue in color and has three eyes. Some deeply tantric influenced traditions consider Goddess Bhadrakali as the consort of Shiva in his form of Mahakal or Bhairava. A tantric interpretation sees Shiva as consciousness and Kali as power or energy. Consciousness and energy are dependent upon each other, since Shiva depends on Shakti, or energy, in order to fulfill his role in creation, preservation, and destruction.

In conclusion, Goddess Bhadrakali has always been considered the most powerful Goddess. In the paintings, the artists try to put in all their efforts to clearly portray the two sides of Goddess Bhadrakali. The benevolent side as well as the strong, fierce side. Following the tradition paintings of the Bhadrakali, today various artists have replicated the paintings. However, the most famous painting still remains the one from the pahari miniature painting tradition.

Follow Rajasthan Studio on Instagram for more amazing art and travel content. Reach out to us on email at contact[at]rajasthanstudio[dot]com. This blog is curated by Rajasthan Studio and written by Sharavu Sunil Talatule.