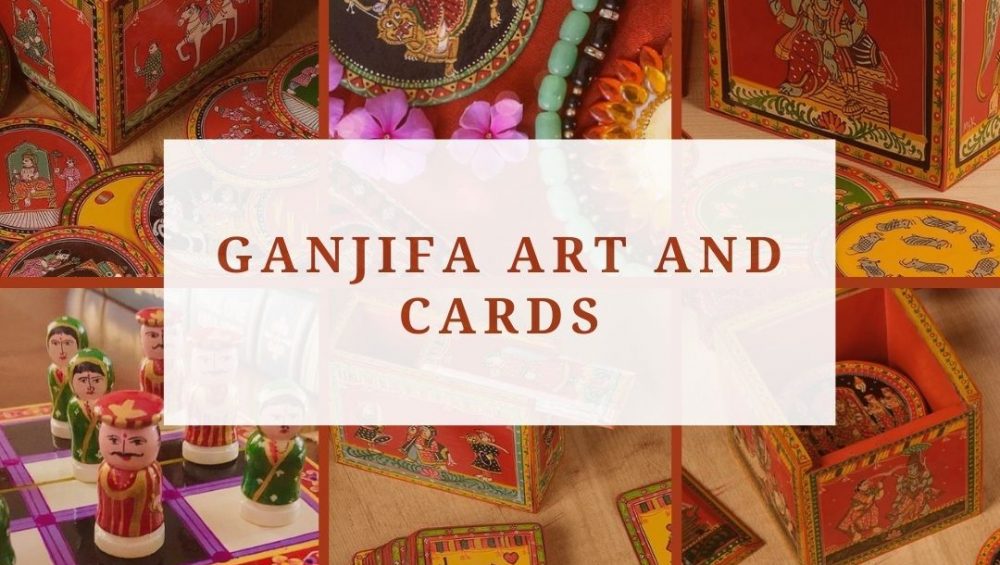 Cultural and heritage values are beautiful because they are ever-changing. One can also see similar patterns in the Mysuru Art too. The art lacked naturalism, the integrity of lines, colours and ornamentation that were clearly visible. Artists adapted some formal or decorative motives as classical representations of qualified and imaginative folk elements of Indian Art. Natural colours and organic pigments used in Mysore paintings make them even more ecological. Ganjifa art and cards are a very good example of the same.

Around the 15th century, through the Persian and Chinese lineage, lies the roots of Ganjifa Cards, and many researchers and archaeologists have traced it to the Arab countries as well. One of the oldest Indian card game is Mysuru Ganjifa. During the Mughal era, Sufi Saints in India introduced it. The word Ganjifa comes from the Persian language and specifically the word “Ganjifeh,” which meant playing cards.

According to art historian and scholar R.H.Kulkarni, Ganjifa cards have a historical evaluation that was not merely played for entertainment. It helps in improving the capacities of one’s memory and has supported mythology tales. As per the Hindu scriptures, the Ganjifa game becomes even more subtle as it washes away one’s crimes. It is also popularly known as God’s game. So players never use them for betting or money gambling.

The Art of Playing

Ganjifa card game is usually painted by hand which makes it unique. While some rectangular decks/sets are made, cards are usually circular. Each set is split into four suits on the basis of solid or weak rankings. The cards in good suits value 1 to 10 higher, although this rating is weak. The game is played as a game called satte pe satta. Any player plays one card per trick, and the player playing the best tactic will get all the cards. The highest card collector is the total winner.

Normally artists use sandalwood pieces and ivory to make Ganjifa Cards. They etch the cards with gold and silver enamelling on them. They are also known as the ‘kreeda patras’. The game of Ganjifa cards comes in 13 complex card games that cover a series of fields like astronomy, mythology, astrology, Puranas, and much more. Various types and versions developed in response to the region and its time such as Mughal, Rashi, Astadigpala, Navagraha, Dashavatara, Ramayana and a few others.

This was a set of 8 suits of 12 cards each and thus it makes a total of 96 cards. Depending upon the specific region, artists paint different colours on each suit. These cards were available in Mysore, Maharashtra, Rajasthan, and Orissa.

These are based on the nine solar system planets. Each of the cards represents a God, according to Hindu mythology. The collection has 9 suits based on the 9 planets. This theme too is from Orissa.

Artists took inspiration from the Mukteshwar Temple of Orissa inspires. They are based on the guardians of the eight holy directions in Hindu mythology. “Ashta” meaning number eight, “diga” means direction, “pala” means guardian.

In the Sawantwadi region of Maharashtra, the Dashavatara is among the most common alternate forms. The cards personified the 10 avatars of Vishnu by the set of 120 cards.  These cards have been popular in Maharashtra, Orissa and Bengal regions.

The main goal of the game is to teach and explain the historical accounts of the ancient scriptures and holy books. Very few artisans develop and manufacture Ganjifa art and cards in India. Some of the places are Sawantwadi-Ganjifa from Maharashtra, Navadurga-Ganjifa from Chikti and Jaypur of Orissa, Gujarat Ganjifa, in Karauli and Madhopur in Rajasthan, Fatehpur in Uttar Pradesh, Kashmir Ganjifa, Kondapalle and Nossam in Andhra Pradesh, Bhaktapur in Nepal and the Mysore Royal Family supports Mysore Ganjifa.

Artists like the Banamali Mahapatro and family from Orissa, Sudha Venkatesh from Karnataka and Raghupathi Bhatta from Mysore are passionate practitioners. These renowned artists of the present times follow this discipline of painting Ganjifa and its vibrant themes.

The elegance of the paintings influenced a lot of art societies and also inspired a new form. The game of Ganjifa cards, which now seems to be on the verge of extinction due to a lack of awareness and demand. The trends of the western game of 52 cards became so dominant that it punched Ganjifa art and craft. However, Ganjifa art has still survived through invasions of time. Let us motivate to rediscover this folk art in the modern world.

Also follow Rajasthan Studio on Instagram for more amazing art and travel content. Reach out to us on email at contact[at]rajasthanstudio[dot]com. This blog is curated and written by Rajasthan Studio.