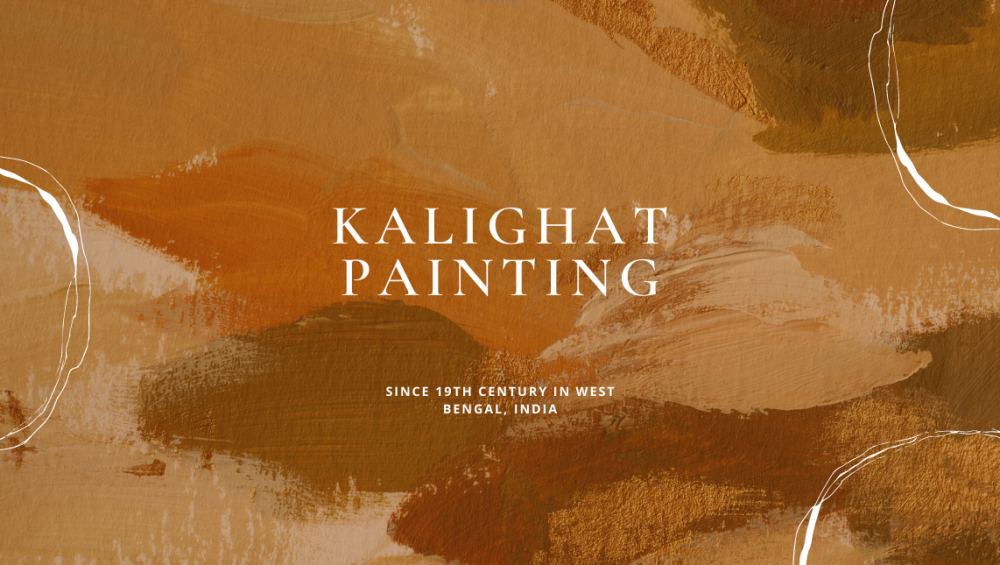 The unique, meticulous and cultural form of Indian Art forms has made them world-famous. One such Indian art form is the Kalighat paintings. Widely loved during the 19th-century Kalighat Paintings are unfortunately not as popular these days. The art form is distinctly identifiable. Features such as sweeping brush lines, bold colours and outlines are inherent to the Kalighat Paintings. Most paintings also have a lack of symmetry in the human figures.

Tracing the History of Kalighat Paintings

The Kalighat art form originated from the Kalighat Kali Temple in Kolkata. Though originally only depicting Hindu gods and goddesses, they soon became more “Occidental” – portraying ordinary people engaged in day-to-day life. This was in contrast to the former “Oriental” school that depicted scenes from Hindu mythology, and later also Islamic depictions. The Oriental school also changed its themes with the progression of time. Trends of the capture of Kolkata came up as did highlights of social evils and Indian freedom fighters.

When the Patuas, an artisan community from West Bengal, settled in Kolkata, the demand for Kalighat paintings shot up. The Kalighat artists would create their masterpieces containing vast narratives on long scrolls of handmade paper. Travellers like these Kalighat Patachitro. Artists still make Patachitros with more contemporary designs and sell them.

PS: you can learn how to make your scrolls online with us at Rajasthan Studio and narrate your own story artistically!

Later in the middle of the 18th century, the Patuas settled around the Kalighat Kali Temple. Unfortunately, it was very late that the artists understood that the handmade paper was not feasible to meet the rising demands. Consumer needs were now of cheap and quickly composed paintings. The Kalighat artists were, thus, compelled to replace their traditional choice with cheaper mill papers. The paintings nevertheless retained their lustre since homemade paints were still employed. However, this was short-lived. With the British came their cheaper poster and synthetic paints; and the Kalighat painters were once again compelled to drop tradition.

Further, oleographs from Bombay and Germany plagiarized the Kalighat designs and sold them for cheaper. Consequently, community-led Kalighat paintings were wiped out. This point forth, around 1930, connoisseurs and museums started preserving original traditional Kalighat paintings.

As time progressed, so did the Kalighat painters. Traditionally the Kalighat paintings were a group effort, generally by an entire family. Since paints were homemade too, all members of the family or the group of artists would serve essential roles. Other roles included preparing the paper, hand-making the brushes, outlining, filling in the colour and final touches. This assembly line process ceased contemporarily when materials were available ready to buy.

Kalighat artists were appreciated by the Britishers. The art style of foreign and exotic art style drew them. The culture and heritage of the paintings proudly showcased further lured them. The accession of the Kalighat paintings was a result of this allurement.

Up until then, the hand-painted art production carried on proudly. The traditional techniques of Kalighat paintings included:

Kalam Patua has added his contemporary touch to Kalighat art. Previously a postman, Patua began selling his art for a mere 20-25 rupees, today they sell for 25,000-35,000 rupees. Queensland Art Gallery & Gallery of Modern Art (QAGOMA) has artwork by Kalam Patua on display. His artwork is especially special since he comes from a lineage of traditional Patuas.

Artist Anwar Chitrakar has the lineage of traditional Patachirto’s. Chitrakar is an award-winning artist. His paintings are part of the artworks at the Victoria and Albert Museum in London and the Mumbai International Airport. In true Patachirto fashion, he sings while selling his paintings, telling the story behind them. You can purchase his work online too.

Bhaskar Chitrakar is another Kalighat artist who deserves your attention. Chitrakar used to sneak into the Government College of Art in Kolkata and observe the exhibitions. Started as a sculptor at a temple in Gujarat, he soon realised painting is his calling. While the Kalighat art style in his paintings remains similar to that of his ancestors, his themes are drastically modern.

Kalighat art has now evolved from handmade paper. With the advent of creating art digitally, it is now also available on Sarees and Blouses.