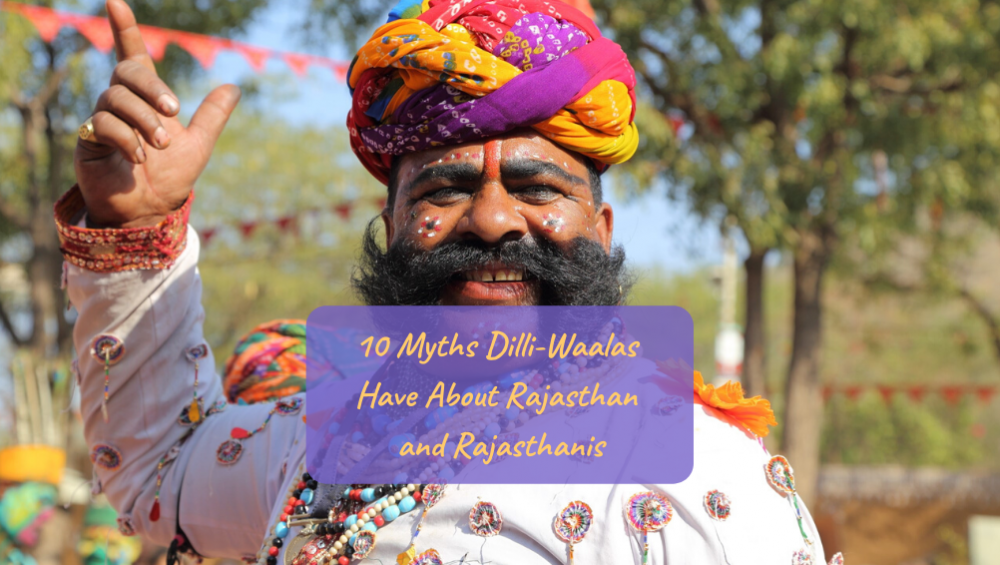 Hey, are you all Rajasthanis? You mean Jaipurites, right? So, do you also wake up to the sun rising from behind the sand dunes and silhouettes of camels followed by local men in turbans with Kesariya Baalam playing in the background? How cool would that be!  – Err… NO!

Rajasthan is the largest state of India in terms of the geographical area and is known for its culture, forts, folk music, art, local food and whatnot, yet Rajasthanis come across these hilarious myths about their hometown as well as themselves. Well, I know it’s frustrating, nevertheless, it’s time we have a little laugh about it and beat them with logic, isn’t it?

Oh Great, You Went To Rajasthan? Jaipur Or Udaipur?

As soon as someone talks about Rajasthan, the first thing that pops in our minds is that they’re either talking about Jaipur or Udaipur. I mean yahi toh hai bas Rajasthan mein, right? Well, child, thou shalt needst a map along with a much-required re-telecast of geography classes! Don’t forget to drop in some facts in their pockets by asking if they’ve ever heard of Mount-Abu, Jodhpur, Ajmer, Bikaner or Jaisalmer!

Isn’t Rajasthan All About Just Deserts And Camels?

Now, this is something you would’ve come across way too often. So, here’s something that you must tell them – Rajasthan comprises a total of 33 districts, out of which around five fall under the Thar Desert namely Jodhpur, Jaisalmer, Barmer, Bikaner, and Nagaur. So, one could say that a part of Rajasthan is a desert, however, it also consists of hill-stations, rivers amidst a lot more.

Don’t You All Wear Ghagra Cholis And Turbans Back In Your Hometown?

Now, as soon as you hear this one, what’s the first thing that pops in your head? SCREW YOU daily soaps for ruining my life! Kidding! No seriously, though, what all you see in the Indian TV series is not the complete truth, fellas! Even though in the most backward villages, a lot of the locals can be seen dressed up traditional attires, generally, people wear jeans, salwar suits, tops amidst other normal attires.

You’re From Rajasthan? You Must Be Marwari?

Okay, so go grab your pens and notepads and write this down, alright? NOT EVERYONE IS A MARWARI IN RAJASTHAN. So, Marwaris belong to an Indian ethnic group of people that originate from Marwar, in Rajasthan, comprising of Jodhpur, Jaisalmer, Barmer, Nagaur, Sirohi, Pali, and Jalore districts. Now, all those people who come from these regions of Marwar can definitely be termed as Marwaris, however, wouldn’t it be unfair to call all Rajasthanis as Marwaris?

Err…Aren’t All Rajasthani Men A Little Orthodox With Big Moustaches?

Before I go on explaining this one, I would like to ask you all, aren’t there orthodox people in other regions of the country, or the world, for that matter? But, does that mean that the entire country or the entire world is orthodox? No, right? So, NO, not all Rajasthani men are orthodox! Now, about big moustaches, well, yeah all men have it, along with huge talwars to slit throats of all those who believe in these stereotypes! Beware!

– “Hey, are you from Rajasthan? Well, sing a Rajasthani folk song?”

Because that is the only folk song you’ve ever heard and know of!? However, we can’t really blame them, can we? That’s the kind of content the Indian film industry promotes, so just try and educate them and send them a link to your playlist! Who knows they fall in love with some and might tell their friends about it?

What Do You Mean You Don’t Know How To Talk In Marwari?

Dear fellas, let me break this to you, the lives of Rajasthanis don’t just revolve around Khamma Ghani, baapu sa, maa sa and thaaro, maaro. There are many such people who don’t know how to speak Marwari. Expecting every Rajasthani to know Marwari language is like expecting every Bengali to know Bengali language and that’s highly improbable, isn’t it?

You Guys Have Mc Donald’s In Rajasthan, Really? Don’t You have Daal Baati Churma And Pyaaz Kachoris All The Time?

Absolutely, same food all day every day just like we have Chhole Bhature in Delhi all day every day, don’t we? So, Daal Baati Churma is a speciality that Rajasthanis love, however, there is Mc Donald’s, Burger King, KFC amidst several other food outlets and people have roti, rice, vegetables on normal days in Rajasthan.

Does It Rain In Your Hometown?

Yes, my friend, it does! Even though the level of rainfall in Rajasthan is low and variable, it definitely rains, primarily during the months of June to September. So, while you’re reading this sitting in some part of the country, it might as well be raining in some part of Rajasthan!

Hill Station In Rajasthan? Wait, What?

I’m sorry to burst your bubble, there is a real hill-station in the Aravalli Range in Rajasthan called Mount-Abu. Sounds familiar? So, this beautiful little place set on a high rocky plateau surrounded by forest not only looks down the lush greens but also consists of Nakki lake where people could go boating to spend their evenings amidst the cool breezes.

So guys, if you have also had a similar experience, write to me in the comments below. Come, let’s together laugh about it along with spreading some much-needed education!

Also follow Rajasthan Studio on Instagram for more amazing art and travel content. Reach out to us on email at contact[at]rajasthanstudio[dot]com. This blog is curated Rajasthan Studio and written by Prachi Batra.