The Inspiring Story Of Gulabo Sapera 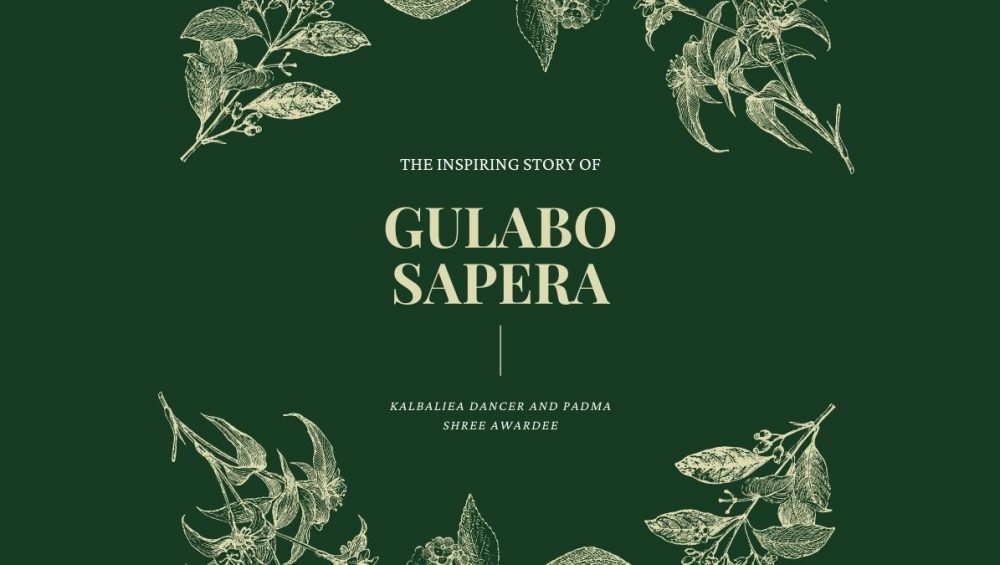 Buried alive as soon as she was born, but she fought for her life and succeeded. Who is she? She is Gulabo Sapera, a famous Kalbaliea dancer and Padma Shree awardee. She introduced the famous folk dance, Kalbelia dance to the world.

Gulao was born in 1973 in Rajasthan in the Kalbaliya community. She was the seventh (7th) child of her parents. However, she was buried by some of her family members when she was not a day old. This was simply because she was a girl- hence a “burden”. But her parents dug her out after nearly 7 hours.

Her father was a snake charmer (sapera). He fought for his daughter’s right to live, and was later abandoned by the community.  His father used to take Gulabo for the rounds. He used to go around the villages with the snakes when she was barely a few months old. She used to enjoy the music and dance of snakes. From there just like snakes she also started to dance and follow the tunes of the been.

Gulabo followed this passion of dancing and picked up dance for good.

In an interview, someone asked how she got the name “Gulabo Sapera”?

She said that it was her father who gave her the name Gulabo. This was so because in her childhood she was very fair and her cheeks were rosy. And, there were no surnames in her community that is why her surname become snake charmer aka sapera.

In 1985, when she was a teenager, she got a life changing chance, where she has to visit DC Washington because the Indian government was promoting Indian cultural dance in the US.

Kalbelia dance was started by Gulabo. She did not learn this dance from anywhere, she used to accompany her father there she sees snakes moving their flexible body and started copying them and started this Kalbelia dance. Now, this dance is popular across the country and become a famous folk dance.

Getting fame as Kalbelia Dancer

She used to perform at a local event. One evening she was performing at local event at Pushkar Mela and was spotted by some members of the Rajasthan Tourism Department.  They asked her to come to Jaipur and helped her to get programs. There she met several artists and officials, and soon after started performing on TV, in shows in both India and abroad and in Bollywood also.

In 1991 she used to live on the roadside in tents as she was not able to afford to stay in hotels.

Later, Maharani Gayatri Devi adopted her and helped in her career.

Gulabo designed her own costume. She designed the black flowing ghagra-choli with dupatta and multi-colored piping worn while performing the dance, which becomes a hallmark of Kalbelia.

She performed at several shows, winning laurels for her graceful dance and rustic folk songs. When she returned from US, she started to perform in India and abroad regularly.

She collaborated with French artists and made several music CDs in French and a book was written on her and a documentary was made. One of the streets in France is named after her.

Gulabo Sapera has a large fan following among students in the US, Canada, Japan, Chile, and France.

In 2016, she was awarded with the Padma Shri for her efforts in drawing global recognition to the Kalbelia folk dance.

Kalbelia dance doesn’t have any recognition before but because of Gulabo, UNESCO enlisted this dance and songs on its representative list of Intangible Cultural Heritage of Humanity in 2010.

We can also see Gulabo Sapera in several Bollywood and Rajasthani films and she also appeared in a reality show, Big Boss.

During the lockdown period, she used to take online dance classes, and the money she got there she used to buy dry ration and other essential things for other artists who have fallen on bad times.

Gulabo is a self-made woman and inspire us all. She didn’t get an opportunity to study, so now she is helping her Kalbeliya community to grow and ensuring their daughters can get formal education. Gulabo says that she wants to pass on her legacy to students to continue the tradition of Kalbelia dance. She runs a school in Denmark and one in Pushkar near Ajmer.