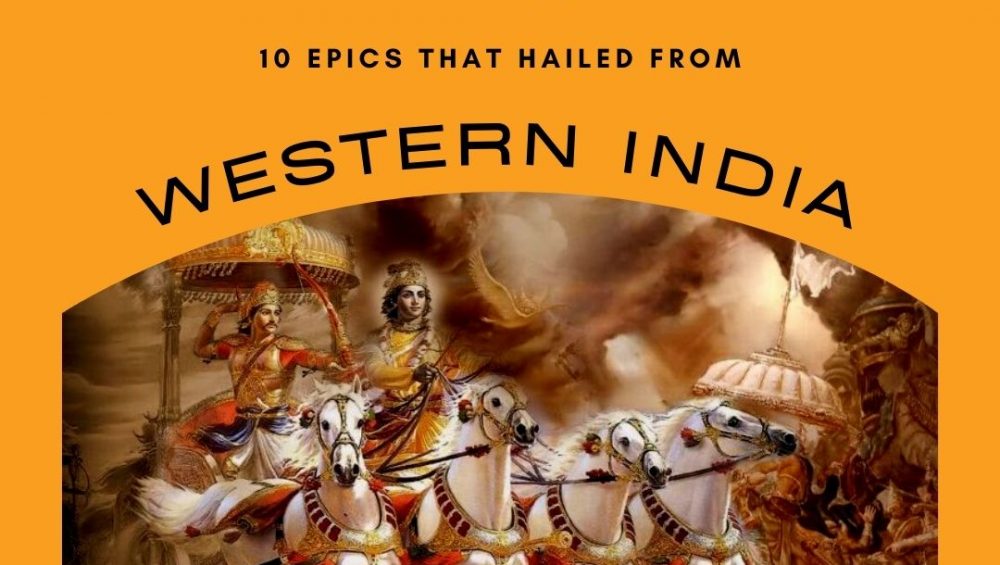 India is a country that’s filled with numerous tales that shape its culture. Today let’s dive into the Epics from the Western India and take lessons from them.

Epics are long narrative poems that date back to the ancient and olden times. They’re tales of the fearless, noble, and extraordinary deeds of men and women. The two great epics of India are the Mahabharata and Ramayana. They played a vital role in defining the epics of India and are the great Hindu epics that the majority of people of India take life lessons from.

Bhomiya epic belongs to the western desert of Rajasthan where people worshipped a dead man. This man was named Bhomiya. The epic revolves around a village where cows were sent to a cowherd for grazing. However, when robbers attacked this cowherd, a courageous Rajput man stepped up as their savior. But when the man ends up dead during the fight, people begin to worship him as the bhomiya god.

This is one well-known epic in Rajasthan that’s part of the Indian epics list.

The epic of Narayani Sati has its roots in Alwar, Rajasthan where a woman’s husband dies due to a snake bite. Soon after, she desires to become a sati. Hence, with the help of an unknown person immolates herself with her husband’s body. A while later she appears in the dreams of the king of Alwar expressing that she wishes for him to assemble a shrine in her name. A large section of the people in Alwar still believes in the powers of Narayani Sati.

Heer Ranjha is one tragic love story and folk-tale of Punjab that is in the list of epics of India. The tale is about two people; Heer, who is a beautiful lady from a high-class family, and Ranjha, who is a charming man that plays the flute. The two meet each other and fall in love; however, separate due to uncertain circumstances. After separation, Ranjha becomes a Jogi and wanders from village to village. Time goes by and he eventually visits the village where Heer now lives. They manage to convince Heer’s parents for marriage. But Heer’s uncle poisons her food and she dies. A grieving Ranjha consumes the same food and dies beside her.

Various movies in India and Pakistan were made by taking inspiration from the epic of Heer Ranjha.

Adalaj Step-well has a popular tale attached to it. The construction of this step-well began by Rana Veer Singh. But Mohammed Begda attacked his kingdom and killed Rana. Begda wanted to marry Rana’s wife Rani Roopba who was a beautiful woman. She agreed to marry on the condition that the construction of the well should be completed. Once the well was made and Roopba was reminded of her promise to Begda, she drowned herself in the well of Adalaj.

The Adalaj epic is one of the famous sagas of ancient epic from Western India.

The tale of Teja begins with a man who saves a snake from dying; however, the snake is furious and wants to bite him. The man makes a deal to come back once he meets his wife. Upon returning to the snake, he bites the man on the tongue as none of his body parts is healthy. Hence, the man is known as the Teja god and is worshipped in several parts of Rajasthan as the snake-cure god.

Umar Marvi is a tale that hails from Sindh. It revolves around Umar, a king who falls in love with Marvi, a village girl. Umar abducts Marvi and offers her pleasures including jewels and a palace. Marvi refuses everything and longs to go back to her village. After trying for a long period, Umar finally gives up and leaves Marvi back to her village.

This is one of the moralistic epics that show us how Marvi was attached to her land and gave up life’s pleasures for it.

Among the tales of Western India is the epic of Mirza and Sahiba from Punjab. They were lovers who fled home to get married. On the way, Mirza took a halt and rested under a tree. While he was asleep, Sahiba broke all his arrows fearing he would kill her beloved brothers if they chase them. When they finally encountered her brothers, they killed Mirza as his arrows were all broken and useless.

This is yet another tragic epic among the Indian Epics from the West that was made into various movies and songs.

Guga is the son of a lady who was blessed by Goraknath. Since he is a blessing from Goraknath, Guga holds a lot of power and grows to be a brave man. He is however expelled from his kingdom because he kills the twins of the woman who nursed him. Guga then goes to Goraknath asking him to open the earth for Samadhi, and hence the earth swallows him.

The epic of Guga is among the most important epics of Punjab and he is widely worshipped in the region.

Lilan Chanesar is a folk tale from Sindh. The folklore is about a woman who loves luxuries and is lured by a woman’s necklace that’s worth 900,000. She agrees to let the woman sleep with her husband Chanesar in return for the necklace. Chanesar on finding that he was sold for a mere necklace, divorces Lilan who had to go through a purification process so Chanesar could accept her once again.

Dholan Sati is yet another Sati epic from Rajasthan’s Beawar region where a professional musician, Dholan was travelling through a forest with her husband. On the way, a man tries to molest her and a Rajput appears as her saviour. Her husband fled and Rajput dies in the fight so she immolates herself with the Rajput. Such types of satis are largely present in Gujarat, Sindh and Rajasthan who immolated themselves.

Every epic has its own moral and values that we can take lessons from. These were some of the Indian Epics from the Western India that aren’t like the modern epics but are unique and valuable in their own way.

Follow Rajasthan Studio on Instagram for more amazing art and travel content. Reach out to us on email at contact[at]rajasthanstudio[dot]com. This blog is curated by Rajasthan Studio and written by Romana Shaikh.