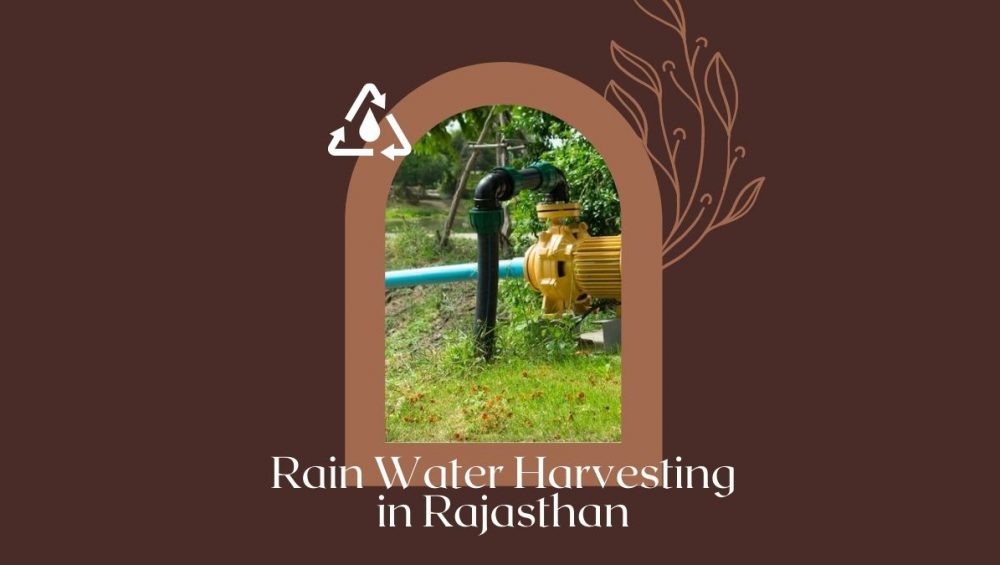 Rajasthan has always been a great contributor in the environmental friendly approaches. Especially the ones that assist life in the water area, for example rainwater harvesting in Rajasthan. Rajasthan is an area where there are no permanent rivers, a turbulent temperature and various river ecosystems cause the majority of water-related problems. The collection of water is therefore strong in Rajasthan’s social structure. Water in Rajasthan is so little that natural sources of water have become religious sites in some places.

With a history of constructing and retaining structures such as Tanka or Kunds, Step Wells, Kuas, Talab, Jhalara, Johad, Kui, there are also prominent water source systems such as Nadis, Sarovar, Sagar, Sammand which help in rainwater harvesting in Rajasthan. There is top most trust about the importance of rain water harvesting in Rajasthan for tackling the current water crisis but, standards of architecture, models of implementation and financial shortages are hurdles in the process. Here’s a brief about some of the rain water harvesting systems on what they mean and how they work.

Nadis are village ponds in valleys by strategically constructing earthen embankments over natural depressions. These Nadis are in the Rajasthan districts of Jodhpur and Rajsamand. The location of the Nadi is determined by its carrying capacity as a result of the reservoir and overflow. The villagers choose the site based on the availability of natural reservoirs and their potential for groundwater storage. After the rains, water supply from the Nadi varies from two months to a year. They range from 1.5 to 4.0 meters in sand areas and from 3 to 12 meters in rocky plains. The Nadis are mostly in use to meet the water needs of cattle. However, recently one-third of these Nadis severely contaminated due to a lack of treatment and evaporation that causes significant water depletion due to the Nadis’s vast surface area.

Step wells are known by names like baudi (including bawdi, bavadi bawri, and baoli). They were created in response to the significant variations in water supply availability. Each step well helps reaching the groundwater level and to be properly maintained. With the building of ramps a different stage was made, well known as Johara, so that cattle can easily access water. The well’s massive open surface served as a rain-catching funnel, collecting water and transporting it to the well’s bottom. The step well scheme was intended to provide residents with year-round direct access to water. They also had an architectural feature.

Also read: Historical Places In Rajasthan To Take You Back To The Glorious Past

Jhalaras are man-made Tanks that are mostly used for communal swimming and religious ceremonies. They capture subterranean outflow from an upstream Talab (Lake) or pool. Some of these Jhalaras are now being used for irrigation. Mining and agricultural operations are destroying some Jhalaras. They are outstanding representations of architectural quality and should be preserved. They have measures on three or four sides and are rectangular or circular in shape. Reforestation is another important way to regenerate these Jhalaras.

Kunds are rainwater gathering systems located in the dustier areas of western Rajasthan’s Thar Desert. A Kund is a spherical underground well with a well-side pit that is lined with lime and ash. It has the appearance of a saucer-shaped catchment area that gently slopes towards the middle, that is the Kund area. The depth and diameter of Kunds can be determined by the amount of water needed for consuming and household systems. To keep the water out, most pits have a lid. They are constructed from lime plaster or cement. The catchment area ranges from 20 square meters to 2 hectares. Wealthy individuals and property owners are mostly the people who own the Kunds.

Baoris are Rajasthani communal wells that are mostly used for drinking. The majority of them are very old and were built for drinking water by Banjaras (nomadic communities). Because of their low water evaporation capacity, they can retain water for an extended period of time. They do not have their own catchment area and are not linked to any water body. They take up as little space as possible in order to conserve money, time, and resources. Jodhpur is especially well-known for its Baoris.

Kuis prevail in the Bikaner district of western Rajasthan. They are basically 10 to 12 metre deep pits sunk around tanks to catch leakage. Kuis may also be used to collect rainwater in low-rainfall zones. To keep the gathered water from evaporating, the pit’s mouth is normally very small. The hole widens as it burrows into the earth, allowing water to flow through a vast surface area. The openings are made of mud which are either sealed with planks of wood or put as a lock and key system. Water is used minimally, as a last resort in times of disaster.

Over several years, the rain water harvesting in Rajasthan and conventional water systems mentioned above have survived. The expertise and knowledge of the field have accumulated over several hundreds of years. It satisfies the folk’s critical water requirements, particularly in the Thar Desert’s water scarce areas.

However recently, these methods for water storage are not in use by the industrialization and urbanization march. These older structures for rainwater harvesting in Rajasthan are particularly suitable for the needs of particular regions. These must be regenerated and revived urgently. The increasing ignorance of these mechanisms and the collapse of the whole support grid has contributed to major dependency on the governing commands. In addition to their historical, geographical and structural significance, they also represent the communal heritage, philosophical and spiritual needs of the people.

Must Read: Rajasthan- Truly the Rangeelo State of India