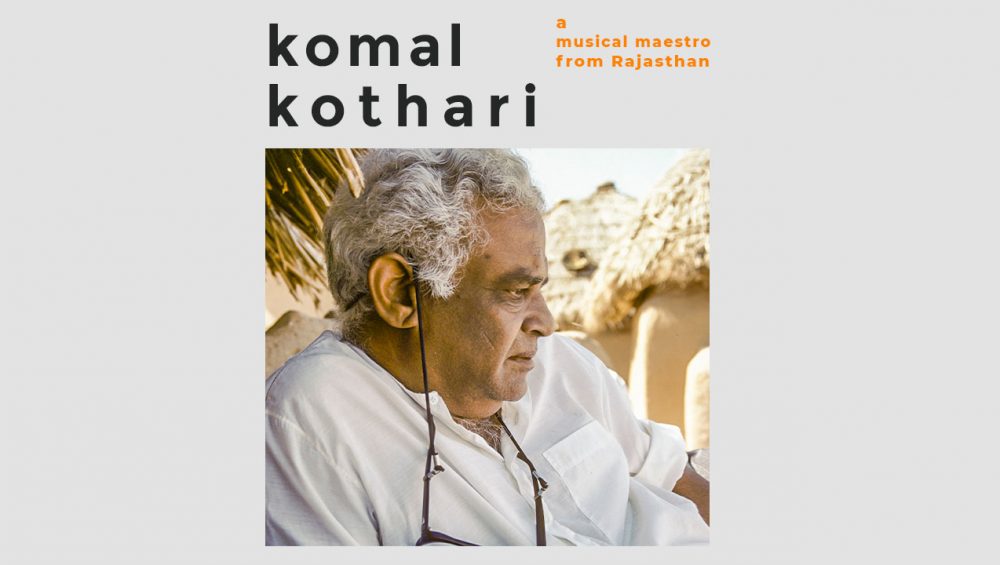 Komal Kothari, fondly known as ‘Komal Da‘, was an Indian folklorist and ethnomusicologist from Jodhpur, Rajasthan. He received the Padma Shri in 1983 and the Padma Bhushan in 2004 for his contribution to Indian music.

But his genius was not just in the field of music. His interests also lay in puppetry. Besides that, he advocated the use of environment-friendly rural methods. Such as traditional water harvesting systems, irrigation, and waste management. Komal Kothari was thus also popular among environmental activists.

His passion for elevating Rajasthani folk music began when he founded a magazine called ‘Prerna’. This he started with his close friend Vijay Dandetha in 1953. The magazine published each month a new folk song. It was discovered and transcribed. His interest also lay in learning about Rajasthani folk songs from the era of 1800-1942. Kothari specifically targeted those who had anti-British sentiments.

He had a stint in ‘Shantiniketan’. He then tried his hand at ghostwriting and fine arts journalism. Finally, in 1958 Kothari became the first secretary of the ‘Sangeet Natak Akademi’ in Jodhpur. Even there his curious mind did not stop its study.

His biggest contribution was his study of the ‘Langa’ and ‘Manganiyar’ communities. The subsequent exposure he provided to them was immense. These communities were previously patron-bound and thus had little exposure. He traveled to Jaisalmer to convince them. He told them to share their art with a wider audience. Today, thanks to Kothari, artists from these communities are performing worldwide. These communities are now economically much more stable. They have also gained a global identity.

In 1960, again with his friend Vijay Dandetha he set up the ‘Rupayan Sansthan’. This institution devoted itself to the research and study of Rajasthani folk culture. It used all available sources at hand. Whether they were narratives, epics, or songs. The themes highlighted were many. Such as the caste structure, local land categories, and other aspects of rural life. Kothari was thus not just interested in music. But he also wanted to know the social and economic realities of the culture of folk musicians.

His lifelong goal was to record folk music for eternity. Therefore in 1964, he began collaborating with scholars from Sweden, France, etc. to organize archival recordings.

Later on, he settled back in his hometown of Jodhpur. He continued his efforts on different things. He researched performance traditions, oral history, and genealogy. Kothari of course continued the organization of folk concerts, but also organized seminars and workshops. He wanted to spread the knowledge to others.

Towards the latter years of his life, he planned a museum. He named it, ‘Arna Jharna: The Thar Desert Museum’. His vision behind it was to make the museum home for everything on Rajasthani culture. Unfortunately, he did not live to see the completed work. But his efforts behind it make him the museum’s founder and visionary.

Komal Kothari tragically died from cancer in April 2004. A documentary was made in 1979 on his contributions to the world of music. Another one by the name of ‘Komal Da’ is based on his life and his work. They are now in an archive in Columbia University Libraries.

Komal Kothari has played the role of a Godfather to the folk communities. In his life, he alone undertook the task of preserving Rajasthani folk music He is truly a gem from Rajasthan.

Follow Rajasthan Studio on Instagram for more amazing art and travel content. Reach out to us on email at contact[at]rajasthanstudio[dot]com. This blog is curated by Rajasthan Studio and written by Aakriti Jaswant.