From Meerabai To Yashica Dutt: 15 Women Writers Of Different Generations From Rajasthan 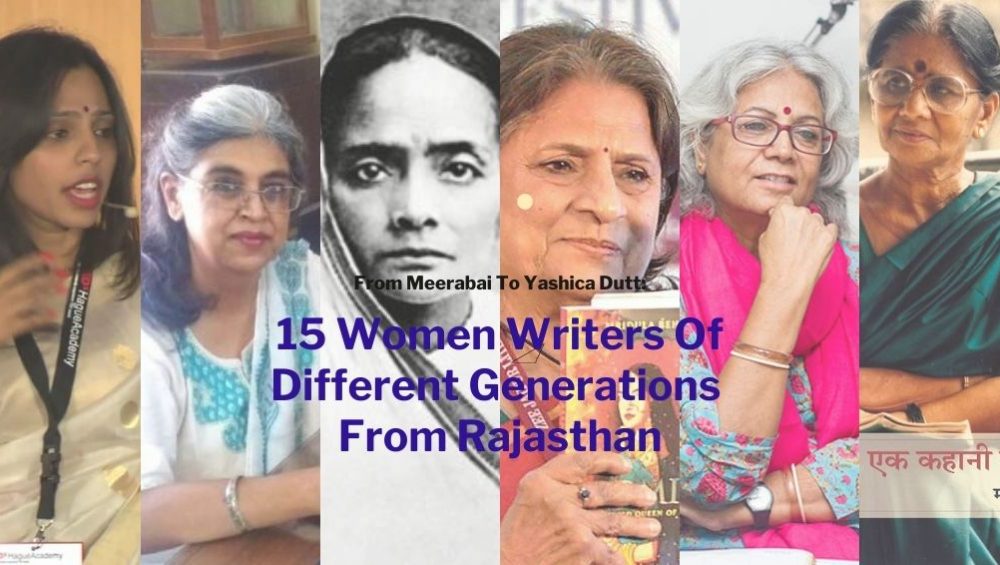 Rajasthani women, their extravagant attires, and their picante food are something that the world talks of time and again. Jaipur Literature Festival has further added to its literature and history. Women writers of Rajasthan have revolutionized the literary scenario of the state.

These women writers, like any other woman, defied patriarchy and gender-based norms and chose to write about other such women and their struggles. Let us recount their journey into the literary sphere.

Manu Bhandari was born on 3 April 1931 in Bhanpura, Madhya Pradesh. She grew up largely in Ajmer, Rajasthan. Her first novel Ek Inch Muskaan was published in 1961. Her books Main Haar Gayi, Aap Ka Bunty, and several others followed then. In her novels, she portrayed women in a new light as independent and intellectual beings. Her narratives highlighted the struggles of women as well as the sexual, emotional, mental, and economic exploitation that they had to face. Her female characters are strong and independent individuals flouting the stereotypes and appearing as the ‘new woman’.

Meerabai – One of the oldest Women Writers

Meerabai was a 16th-century Hindu mystic poet and a devotee of Lord Krishna. She was born into a Rajput royal family in Kudki, Pali district, Rajasthan. Some of her compositions are still widely sung in India. Few of these compositions are Paayo Ji Maine and Raam Ratan Dhan Paayo. Meera’s poems are lyrical padas in Rajasthani language where she portrays Krishna as her lover. She calls him yogi, and calls herself yogini who longs to be into the spiritual marital bliss. Her style combines impassioned mood, defiance, longing, anticipation, joy and ecstasy of union, always centered around Krishna. Women writers like Meerabai have also added a mystical touch to our mythologies.

Yashica Dutt is the youngest woman writer who is a 34-year-old Indian writer and journalist born in a Dalit family on 5 February 1986 in Ajmer, Rajasthan. She currently lives in New York City. She has worked with Hindustan Times, HuffPost India, Scroll.in, LiveMint and The Wire as a freelance journalist. Her book Coming Out As Dalit talks about how she felt obliged to hide her caste throughout her life. She also pretended to belong to an upper caste all along fearing that her true identity would cast her out.

Jyotimoyee Devi was one of an early twentieth-century Indian woman writer born on 23 January 1894 in the Princely State of Jaipur. She wrote principally about her childhood which is now a part of Bangladesh post-partition. Due to the tragic demise of her husband, shewent to back to her parents’. There, she was constantly subjected to suppression and patriarchy. She began to closely observe and subsequently question it by writing these questions. Nevertheless, she treated both her sons and daughters equally. Furthermore, she began to write Bengali short stories, and non-fiction focusing on the rights of women and Dalits. Her poetry and stories were short and clear for maximum people to understand with a strong message.

Bindu Bhatt was a Gujarati language woman writer born on 18 September 1954 in Jodhpur, Rajasthan. She later migrated to Limbadi and then Ahmedabad. Sahitya Akademi awarded her for her first novel Mira Yagnikni Dayari as well as the second one, Akhepatar. Her novels have been translated in various languages including Hindi, English, Rajasthani, Sindhi, Marathi and more. Besides that, she has also translated several works from Gujarati into Hindi. She also debuted with the short story genre with her book Bandhani.

Rajni Goyal is a professor of political science at the University of Rajasthan in Jaipur, India since 1976. She completed her masters and Ph.D. degree from the same University. Many of her articles have been published in national as well as international journals. Some of them include Indian Public Administration: Institutions and Issues, New Age International, 1995, Major Constitutions, Vipul Enterprises, 2005, Revenue and General Administration in Rajasthan, Vipul Enterprises, 2003, The Gram Sabha and Gram Sevak in Rajasthan, Vipul Enterprises. 2002, amidst several others.

Girija Vyas is an Indian politician, poet, and author. Born on 8 July 1946 in Nathdwara, Rajputana Agency, British India, Vyas has been a Member of the 15th Lok Sabha, the lower house of the Parliament of India, and the former president of the National Commission for Women of India. She has written a total of eight books, three of which contain her poetry namely Ehsaas Ke Par, Seep, Samundar Aur Moti and Nostalgia in Urdu, Hindi as well as English languages.

Vithika Yadav is a 39-years-old human rights activist born on 21 December 1980 in Alwar, Rajasthan. She has worked towards human trafficking, slavery, gender rights and sexual and reproductive health and rights. As the country head of Love Matters India, she educates people on love, sex and relationships for all genders and sexualities. She has worked as a fellow for Free The Slaves and as a consultant to the United States office on drugs and crimes for anti-human trafficking amidst several others.

Dharmendar Kanwar is a travel writer who started writing professionally soon after she graduated from the University of Rajasthan. She has not only contributed extensively to Rajasthan Tourism but has also written scripts for television documentaries. Her contribution to stories and photographs in almost all major newspapers and magazines exists in the country. She is the author of Times of India Jaipur Food Guide and has written several other books including Rambagh Palace; Hadauti, The Unexplored Rajasthan amidst several others.

Dinesh Dalmia was an Indian Indian poet, short story writer, and novelist of Hindi literature. She was born on 16 February 1928 in Udaipur, Udaipur State, British India. Dalmai was the fifth wife of Ramkrishna Dalmia. She always defied the gender discrimination and purdah system throughout her life. Also, she published poems, prose poems, short stories, and novels on the theme of women’s emancipation. Some of her renowned works are Shabnam, Niraash Aasha, Mujhe Maaf Kama, and Yeh Bhi Jhooth Hai amidst several others.

Mridula Behari is an award-winning author, playwright, and activist. Behari has primarily written in Hindi and regional languages. However, her first English novel, Padmini, was recently published by Penguin Random House. In total, she has authored 15 books including several short story collections, novels, and plays. Besides writing numerous plays for radio, TV, and theatre, Behari also speaks extensively at literary forums in India and abroad on women’s issues and her works. Besides, she also represented India at the 2010 Beijing International Book Fair and is one of the first women writers to do so.

Rima Hooja is an archaeologist and a historian with a PhD from Cambridge University. She was also a former Member of National Monuments Authority. Hooja is the Director of MSMS-II Museum City Palace Jaipur and Managing Trustee of Jaipur Virasat Foundation. She has published nearly a hundred academic papers and has authored a total of nine books including Prince, Patriot, Parliamentarian, Crusader for Self-Rule, Rajasthani Stories Retold, Rajasthan: A Concise History, and Maharana Pratap. She also has various research papers, newspaper articles, and conference presentations to her credit.

Manisha Kulshreshtha is one of the renowned women writers Hindi writer and author of four novels and six short story collections. Kulshreshtha was awarded 28th Bihari Puraskar in 2018 for her novel ‘Swapnapash’. She was born in Jodhpur and graduated in science and post-graduated in Hindi literature. She is known for her works like Shigaf, Shalbhanjika, and Panchkanya. Kulshreshtha also edits Hindi web magazine ‘Hindi Next’. Her recent novel Swapnpash that revolves around the life of a schizophrenic female painter was very well received. She has received several awards and fellowships. She is currently working on a biographical novel based on a famous Hindi writer Bhartendu Harishchandra’s protégé and companion, Mallika.

Born on 1 July, 1967 in Abu Road, Rajasthan, Rajani Morwal is a renowned Hindi writer, poet, and translator. She has been awarded the Gujrat Sahitya Akademi Award. Her stories have been published in numerous magazines and newspapers. Her most well-known book is Kuch to Baki Hai. Besides that, Doordarshan and Aakashwani of Gujrat and Rajasthan have interviewed her too.

Tasneem Khan is a writer and a journalist. Her debut with her novel Ae Mere Rehnuma was in 2016. She was nominated for the Bhartiya Gyanpith’s Navlekhan Award. This famous and hard-hitting novel describes the situation of Muslim women across the globe. Khan also published her story ‘Rukh e Gulzar’ in 2016, which received much acclaim. Besides, she is currently working on her next novel titled Humnawai.

Now, aren’t you awestruck by the immense talent and literature available in the hidden corners of our country that usually go unnoticed, especially of the women writers?

Also follow Rajasthan Studio on Instagram for more amazing art and travel content. Reach out to us on email at contact[at]rajasthanstudio[dot]com. This blog is curated by Rajasthan Studio and written by Prachi Batra.