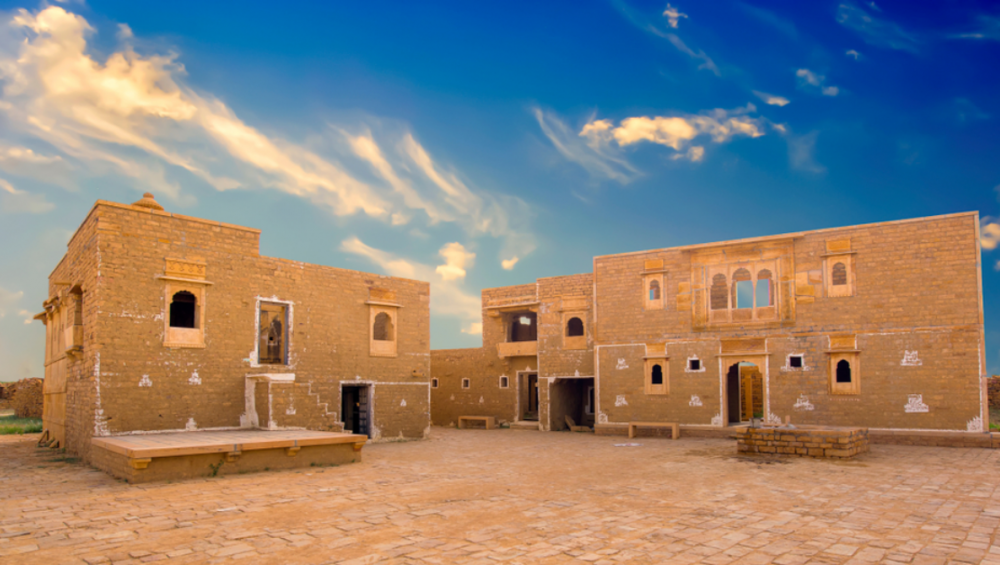 Ghost towns and villages hold a charm very different from the ruins of castles and fortresses. Mostly because they give us a chance to peep right into the lives of the people who once inhabited them. Kuldhara is an abandoned village in the city of Jaisalmer in Rajasthan. Established around the 13th century, it was once a prosperous village inhabited by Paliwal Brahmins. The villagers were mostly agricultural traders, bankers and farmers. And would use ornamented pottery made of fine clay. It was abandoned by the early 19th century for unknown reasons. Possibly because of dwindling water supply, an earthquake, or as a local legend claims. Because of the atrocities by the Jaisalmer State’s minister Salim Singh.

A British officer by the name James Tod recorded the 1815 population of Kuldhara as 800 (in 200 households). Based on information from “the best informed natives”. By this time, the Paliwals had already started deserting the village. By 1890, the population of the village had declined to 37 people; the number of houses was recorded as 117.

Over years, Kuldhara acquired a reputation as a haunted site. And the Government of Rajasthan decided to develop it as a tourist spot in the 2010s.

What the Legend Says

According to the legend, the evil eyes of Salim Singh, the powerful and debauched prime minister of the state, fell on the daughter of the village head and he desired to marry her by force. He threatened the village with grave consequences if they did not adhere to his wish. Instead of submitting to the order of the tyrant. The Paliwals held a council and people of 85 villages left their ancestral homes and vanished. But this was not all; before leaving, they put a curse on Kuldhara that no one will ever be able to settle in their village thereafter. To this date, the village remains barren; left almost the same as its inhabitants had left it centuries ago. Also, it is said that people who have tried to stay there at night have chased away by strange paranormal phenomena.

Another, more plausible reason can be that Salim Singh raised the taxes to such an extent that it became unviable for the local community to survive in the village; and they thus decided to migrate to greener pastures. However, people love the former story because after all, who doesn’t want a tinge of romance and mystery in their tales!

At present Kuldhara Village is a heritage site. Archaeological Survey of India (ASI) is maintaining this village. A lot of renovation work has been going on in the village for the past few years. A major portion of an old, little temple, in the middle of a cluster of houses, has renovated now. A nice set of stairs lead to the temple premises. Its walls still have small nooks that once held tiny little lamps. Tucked away with mystery and folklore, the village lies in ruins and all that is left are various open houses in a state of complete despair with no signs of human establishments and activities. As you enter the premises of this ancient village, you feel as if time has stood still in Kuldhara since the last 200 years.

Accounts from people who have previously visited the village describe it as a village with scarce to none vegetation. It has dilapidated houses. Amid the ruins stands a renovated temple. A few houses have also renovated to give the visitors an idea of the structures there. There is no commercial activity around the area, which is located in the Thar desert.

In the former village, it ruins about 410 buildings . Another 200 buildings were located in the lower township on the outskirts of the village.

The best time to visit Kuldhara is between October and March when the weather is pleasant in Rajasthan, one of the warmest Indian states. Tourists can go sightseeing in various places of interest without being exhausted. As a visitor to the abandoned village, one is bound to feel curious about its past, about how the villagers disappeared without a trace and that too, without drawing any attention to their evacuation and more importantly, what happened to them.

All tour guides are well aware of tourists’ curiosity and explain the myths and legends associated with the disappearance of the residents. Some possible answers to these questions lie in the re-constructed houses – an attempt to re-create the layout from the past and to aid the imagination of what Kuldhara might have been. Tourists can tour these houses, walk around the layouts and get a glimpse of the lovely architecture that possibly was.

Besides the dilapidated layouts and a small umbrella-like structure, tourists can walk down the dusty. Desolate roads to visit the many deep, step-wells within the village. The presence of multiple wells in the village gives a feeling that there seemed to be one well for a set of residents. Curiously around each well is a pillar with numerous deities sculpted on them. One of the recognisable sculptures is that of Ganesha (a Hindu deity) while the other seems to be that of some goddess. While the significance of these pillars is not known, they add to the intrigue of the place.

In 2015, the Rajasthan government decided to actively develop the village as a tourist spot. The project is being undertaken as a public-private partnership with Jindal Steel Works. The plan includes establishment of visitor facilities such as a cafe, a lounge, a folk-dance performance area, night-stay cottages and shops.

However, without the special permission of the caretakers of the village, no one can stay the night here. As the sun sets across the sand dunes, the gates of Kuldhara are closed by residents of neighbouring villages. After 6 pm, no tourists are allowed until today as locals believe that spirits still haunt the village after sunset.

Some FAQs About the Village

The Kuldhara village is located at a distance of about 17 to 20 kilometres from the main city of Jaisalmer. So, from Jaisalmer you can easily hire a cab or take a taxi which will take you directly to the entrance of the haunted Kuldhara Village.

The Kuldhara village gates remain open on all days of the week from 8 AM till 6 PM.

Yes. Per person, the entry fee is a mere INR 10. If you wish to take your car inside the village, then the fee is INR 50.

Kuldhara is a desolate place with a forlorn look and brings sadness to the heart. When one thinks of those unfortunate people who were forced to leave the land of their forefathers. However, the place doesn’t seem to be spooky for any reason other than the legends themselves, and for our own perception based on those stories. Though there is sadness in the air, there is hopefully nothing cursed about it.

An erstwhile flourishing village of North-Western India whose history dates back to the 13th century, it is abandes overnight for some reasons. As you walk along the ruins of Kuldhara village you can witness the ravages of time on its soil. However, the place does not have any supernatural fact behind its myth but a veil of sadness rends the air. Narrating the unfortunate past of its natives who were forced to leave their ancestral place under the cover of darkness.

Follow Rajasthan Studio on Instagram for more amazing travel content. Reach out to us on email at contact[at]rajasthanstudio[dot]com. This blog is curated by Rajasthan Studio and written by Samira sarin.