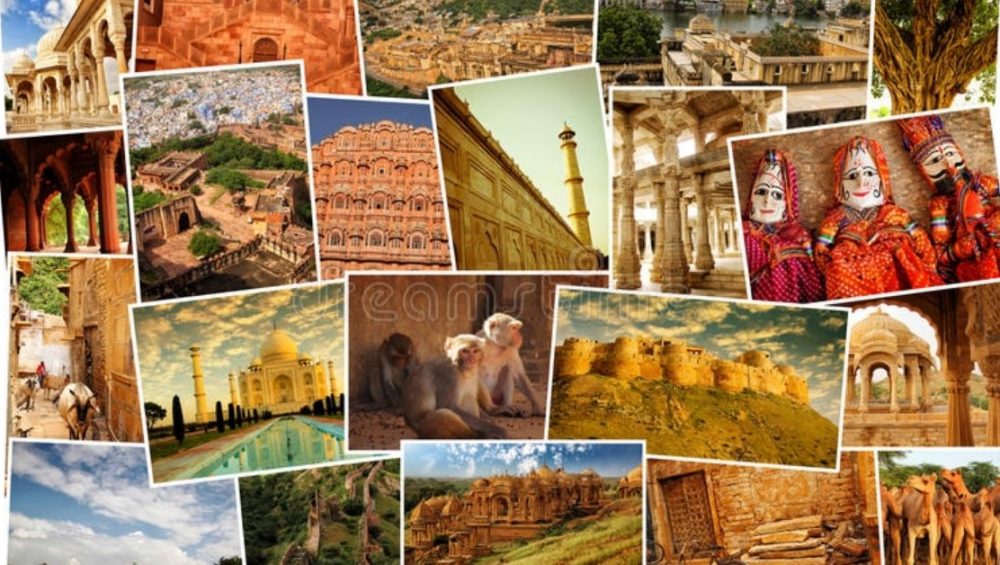 Cultural heritage, vibrant traditions, grand festivals, lip-smacking foods, and glorious history are some of the words synonymous with the land of royalty, Rajasthan. With a culture that dates back to nearly 5000 years. This is a land replete with a flavor and vibrancy unlike any other place in the world. Despite being a desert state for most parts, the vibrant tourism of Rajasthan is as enticing as its cultural and artistic heritage. Therefore, it makes people from all over the world flock to this place.

If you’re looking to taste the ancient Indian way of life. Therefore, Rajasthan should be part of your bucket list. From splendid forts to majestic temples to sprawling palaces, here’s a quick glimpse at the vast and enticing cultural heritage of Rajasthan.

The Rajasthan golden triangle tour is one of the most popular tourist circuits that usually starts at Delhi, moves south towards the Taj Mahal at Agra, and culminates in the desert landscapes of Rajasthan.

This is one of the best tourist circuits to experience. After all it not only gives you a chance to savor the magnificence of Rajasthan’s capital city Jaipur but also lets you enjoy Delhi and Agra.

The architectural marvels of Rajasthan. Which doused in stories of courage, bravery, and sacrifice of its warriors, have served as a traveler’s paradise for years. Let’s take a look at some of the most popular ones.

Located in Jaipur, built by Raja Man Singh, and situated next to Maota Lake. Amber Fort is one of the most famous tourist attractions of Rajasthan. Also known as Amer Fort, it has a perfect blend of Hindu and Muslim architectural styles.

A UNESCO World Heritage site, Chittorgarh Fort, built in the 7th century, is a testament to many brave warriors of Rajasthan, namely Ratan Singh, Rani Padmini, Meera Bai, and Rani Karnavati. With seven gates and several palaces, it’s one of the largest forts in India.

The Mehrangarh Fort in Jodhpur is a splendid architectural wonder built by Rao Jodha in 1459. It is situated on a rocky cliff, 400 meters above sea level. Mehrangarh Fort is visible from all vantage points in the city. The palace has seven gates and features a museum containing ancient musical instruments, palanquins, armaments, and royal costumes.

The Jaisalmer Fort is a UNESCO World Heritage Site and the only living fort in the world. Therefore it is also known as the Golden Fort. After all it is uniquely carved from gorgeous yellow sandstone. Indeed it is one of the best architectural wonders of Rajasthan. Moreover it features a sophisticated fusion of Islamic and Rajput architectural styles.

Kumbhalgarh Fort is the second-longest wall in the world after the Great Wall of China. The birthplace of Mewar’s legendary king, Maharana Pratap. Hence, Kumbhalgarh Fort, is a royal cultural heritage of Rajasthan renowned for its marvelous architectural beauty and rich history.

This land of splendour has several pilgrimage sites for those seeking spirituality and peace. Here are some popular ones.

Located in one of the oldest cities in the world. Brahma Temple is a temple dedicated to Lord Brahma while it is situated on the banks of Pushkar Lake. The place is frequented by thousands of devotees every year. Moreover it has marble steps leading inside where a silver turtle is imprinted on the floor and tons of silver coins are embedded beside it.

Ranakpur Jain temple is an important pilgrimage site for the Jain community and features a unique architectural style that’s both delicate and exquisite. Therefore, constructed during the reign of Rana Kumbha, this gorgeous temple has 80 domes and 29 halls with 1444 pillars which are all unique and distinct.

One of the most vital and sacred pilgrimage sites of the Muslims, Ajmer Dargah Sharif is a Sufi tomb (dargah) of the revered Sufi saint, Moinuddin Chishti. Moreover, it’s a place of worship revered by both Hindus and Muslims.

In essence from magnificent forts, splendid palaces to ancient temples. Therefore, cultural heritage of Rajasthan is replete with grandeur and beauty. In fact , it’s one of the best places to touch, taste, and experience India’s ancient traditions and rich culture. Above all Rajasthan is very welcoming.

Also follow Rajasthan Studio on Instagram for more amazing travel content. Reach out to us on email at contact[at]rajasthanstudio[dot]com. This blog is curated by Rajasthan Studio and written by Shivali Rai.