Procuring Stories To Life With Scroll Paintings From All Over India 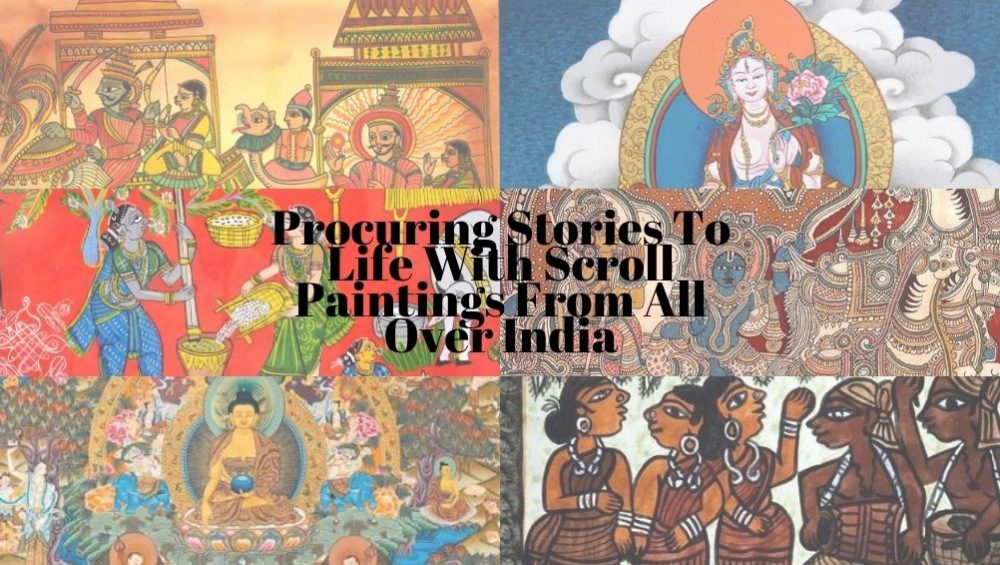 Scroll Paintings of India: India is celebrated as an ethnically diverse nation. Its culture reflects its heterogeneity. Firstly, Indian folk art has had an impact on religions and varied cultures. However, few art forms disappeared and diminished from the prehistoric period. Though many artforms are practiced even today.

Scroll painting is an art form that has laid its foundation in every state of India. Scroll painting is an amalgamation of stories about traditions, culture, and ideologies of a particular locality with exquisite folk art on scrolls with different hues. Life-size scrolls depict the historic stories from epics and mythology. These scrolls are of khadi cloth and of a boiled paste of rice starch, tamarind, sago, and chalk powder.

The painting style and patterns of scrolls differ significantly. Also, they do represent regional tradition and culture. Let’s learn about the well- verse scroll paintings meticulously from different states of India.

Phad Paintings dates back to thousands of years, narrating stories of God and local- deities like Pabuji and Devnarayan on Phad. Rajasthani’s worships Phad as a portable temple made by “Joshi” community. Some common features can you awestruck and spellbound. Each inch of the cloth has figures. All the figures face each other instead of that of the viewer. Only earthen colors add the mesmerizing and vibrant look. Painting begins on an auspicious day. The virgin girl from the Joshi family or higher caste certainly makes the first stroke of the brush. Lat, it also featured the richness of Indian princely states, battlefields, adventure stories and many such on scrolls.

Cheriyal paintings originated from Telangana. Only the Nakshi family practices Cheriyal Painting, highly influenced by temple art and Kalamkari art traditions. Nakshi family has passed this art form to further generations with a version of Nakshi art in it. You may see the backdrop of Cheriyal paintings ranging from rural depictions of simple life to epics and mythological tales. Bright colors enhance the power of emotions. The traditional costumes portray the historical clothing styles of the Telangana state.

Pattachitra serves as an integral part of the art history and heritage of West Bengal. Pata word has Sanskrit origin. It means a piece of cloth. Chitra means painting. There are different facets of Bengal Pattachitra. These are Durga Pat, Medinipur Pattachitra, Chalchitra Tribal Pattachitra, and Kalighat Pattachitra. Religious, mythological, and contemporary tales come along with social aspects accompanied by Patuas singing different melodies. Also, its intelligible music, bold colors, lines, and strokes are well known.

Jadupatua painting is a form of scroll painting from Jharkhand. Jadu is a Santhal word that means artist and patua means scroll. Also, the most used hues are golden, yellow, blue, and purple extracted from leaves and flowers. There is a belief that women ask the artists to make life series of their dead ones. Then, the painters await more deaths in the lure to earn more. An interesting fact that they won’t draw the pupil in the eye while drawing the portraits of the dead man. Also, these painters would join the bride to her new home. There they would depict the bride’s happiness and prosperity on a scroll to assure her parents about her happy life.

In Odisha, Pattachitra is 3000 years ago artform. These scroll paintings displayed the religious folklores and life events of the people from that period. Back in time, they showed the tales of Lord Jagganath, Balabhadra, and Subhadra. But today, they are preserving the art form which exhibits tales of Lord Ganesh and Lord Krishna. Initially, male Oriya artists performed this art form. However, today some women artists flaunt their skills. Authentic and original Pattachitra scrolls are made from colors extracted from vegetables and minerals. Also, like the Chitrakar had to be vegetarian for that period, to sleep on bare ground, and had to wear a new dhoti when working on paintings.

Paitkar is a traditional art form of Ambudi village located in the eastern part of Jharkhand. The base for this art form is palm leaves and brushes, developed from the hair of squirrel and goat. The Paitkar paintings emphasize what happens to human life after death. The stories revolve around Ramayan, Mahabharat, and other Hindu epics. It also talks about the deeds of gods and goddesses and also of local deities. There is a belief that this scroll can send the wandering souls of the dead ones to heaven.

Thangka is an art form with its roots in Buddhist Scriptures. Tibetan community practices this art form. You may find these religious scrolls hanging in monasteries and even at the family altar. Featured themes are religious devotion, aids in meditation, and sometimes the wheel of life. A lama (teacher) would carry these scroll along with his travel and talks about Buddha’s life and his teachings to convey the spirituality, different aspects of deities, and other Buddhist concepts. Colors that soothe your eyes are some detailings of gold dust to highlight the ornaments. Thangka is commissioned more often during the occasion of birth and death. Even today Thangka is in Ladakh, Sikkim, Jammu and Kashmir, Arunachal Pradesh, Lahaul, Spiti, Himachal Pradesh, and in Dharamshala.

Firstly, this art form was recognized 3000 years ago which is still practised in Telangana and Andhra Pradesh. Kalamkari has arisen from Persian words, Kalam meaning pen and Kari meaning craftsmanship. Done with hands and block printing to develop narrative scrolls. Also, it popularly includes different characters from Mahabharat and Ramayana using vibrant natural dyes. Storytelling whilst travelling from one village to another. Today, this art form can be witnessed in Kalamkari sarees and clothing.

Chitrakathi has its cores from Maharashtra and some parts of Andhra Pradesh and Karnataka. Chitrakathis is a storyteller community traveling to villages and would narrate a long session on mythology and other legends. Thick black outlines around bold paintings enhance the power of Chitrakathi painting. The typical feature of Chitrakathi painting is the figures in both profile and frontal perspectives, whereas animals only in profile. Faces with a high forehead, pointed nose, a curve for the mouth and chin, and red lines for lips are few stereotypes. The most animated feature of this painting is the eyes. It has big white circles marked with a black dot circle indicating a pupil in the center.

Garoda paintings is a scroll painting on paper using watercolors. Firstly, it started in the mid-20th century. Garoda paintings by Garodas who are storytellers from Gujarat. Normally, they are not only recognized for painting and narrations, but also for depicting horoscopes for newly borns. Garoda paintings portray legends ina single scroll. Hence, these picture scrolls are called “tipanu” in Gujarati. This means “recording” or “remarking” with an average of 3 meters (35 cm) longboard.

Blaveli reading is from central Kerala with very few artists in this storytelling tradition. Firstly, it is a hereditary practice of the Veeranshaiva community. Also, scrolls made of cotton cloth mixed with maida and turmeric powder. Figures and shapes are drawn with ink, giving intricate look. Blaveli is popular in the month of Karkidakam. Throughout the year, Hindu families perform it. Also, it is a belief that listening to this narrations brings joy and prosperity to the household.

Manjusha art form has originated from Bhagalpur district of Bihar in the 7th century. It is a folk art of Angpradesh with religious devotion to the Hindu festival of Bishari Puja. Manjusha painting has its proof belonging to Sindhu Ghati Civilization. However, this art form has limitations when it comes to using colors. Only three colors appear on scrolls, they are Pink, Yellow, and Green.

Also follow Rajasthan Studio on Instagram for more amazing art and travel content. Reach out to us on email at contact[at]rajasthanstudio[dot]com. This blog is curated by Rajasthan studio and written by Hitanshi shah.