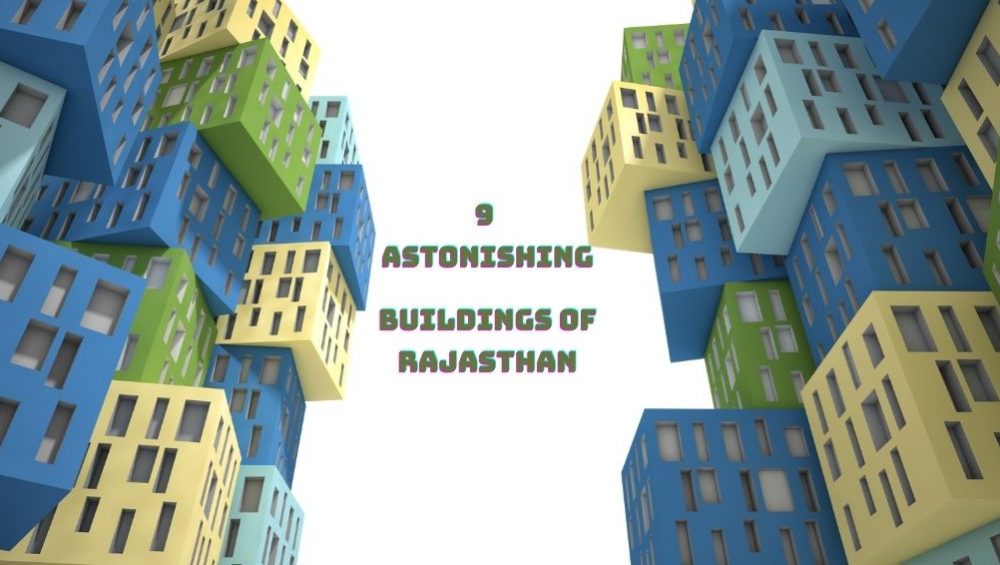 Astonishing Buildings Of Rajasthan: When we talk about magnificent buildings, the first thing that comes to our mind is Rajasthan. The enormous forts of Rajasthan and their architecture depict history and art. Besides its astonishing Havelis, there are various modern architectures in Rajasthan. This has spellbound people with its massive and beautiful form.

These buildings are not only preserving history but are also giving competition to well-developed structures across the world through their innovative strategies. Their main objective is to solve climate issues.

This article gives you comprehensive information about the 9 bizarre and astonishing buildings of Rajasthan:

Modernizing the definition of architecture in Rajasthan

Jawahar Kala Kendra (JKK) is known as the gem of Jaipur. It is one of the prestigious multi-art and craft museums established in 1991. It can captivate one with its mesmerizing paintings and wall art. This modern art center devotes itself to Late Prime Minister Jawahar Lal Nehru. It is designed and developed by a well-renowned architect Charles Coree. The uniquely-planned infrastructure indicates the use of Navagraha in which each square represents planets. It has inspired by the Shipla Shastras theories of Maharaja Jai Singh II, the founder of the planned city Jaipur.

The building has separate blocks as per the significance of each planet. The central area is open under the sky. Moreover, the walls of JKK have engraved with sandstones. To visit the gallery and watch great performances, one can reach the museum with ease. It is on the route of Jawaharlal Nehru Marg, opposite to Commerce College, Jhalana Doongri.

World Trade Park- Grand Tour to one of the best Malls

World Trade Park is the ultimate place for shopaholics and food lovers in Jaipur. Known as the biggest mall of the year for its outstanding unique architecture in 2012, it has endless choices for its visitors. Its infrastructure as planned and designed by Sincere Architects Private Ltd and owned by Mr. Anoop Bartaria. With around 11 floors, the glasswork of blue and silver glorifies the beauty. This attracts people from different parts of the world to experience the grandeur during festivals. This biggest mall has built into blocks. The two blocks are North Block and South Block that connects with a walk-way, full of small restaurants.

Motisons Jeweller – The Lotus of Jaipur

Motisons Jewellery showroom is one of the finest modern architectural buildings of Jaipur. Built in 2013 by Kothari associates to gain recognition across the world. Motisons is one of the most successful examples of spider application in India. Its strategy of soothing in the day time and powerful night shows in the form of crackling effects sets apart from the rest of jewelry houses. Referred as the Lotus building of Jaipur, as the building is in the square shape that is symmetrical from all four sides. Moreover, the leaves of the lotus have been springing out formulating a 3D effect. It is located on Tonk Road, visitors can take a glance at its building effortlessly.

In the hustle-bustle of Jaipur, the building of the Shree Cement office fills enthusiasm and lightens up the mood of all Jaipurites. Sanjay Puri, an acclaimed architect designed and developed this in 2012. The exterior of the buildings incorporates illuminating LED lights, which overpowers the nights through its beautiful and vibrant lights during festivals and special occasions. Since Mr. Sanjay Puri is a strong follower of the Grc Facade concept, the 3D design of the Sree Cement office has the glass fiber concept, which makes it the modern architecture of this era.

Pearl Academy of Design is one of the premium institutes of design. Also, it is one of the astonishing buildings of Rajasthan. It provides excellent knowledge to budding designers. Also through its modern facade institute has created interactive space for students.

Its geometric building defines the creative sphere to work multi-functionally at every corner of the school. In 2008, one of the famous firm Morphogenesis had planned the contemporary architecture of this fashion institute.

The artistic building depicts the sustainable ideas and traditions of Rajasthan. Since its infrastructure is part of the scorching heat of Kukus, Jaalis protect the building. Moreover, the sewage treatment plant is in the institute that supports rainwater harvesting and reclaimed water.

Expanded into suburbs of Sun City, Shunyam is a splendid independent retirement house. It depicts the royalty of Jhodpur while focusing on the essentials of family through its contemporary designs plans. The flagship of the projects is to provide an effective solution. In the context of culture and climate changes while satisfying the modern-requirements of members. Strategic ventilation and evaporative cooling towers in the scorching heat is the most rewarding factors of staying in such peculiar homes.

Mount Abu is fondly known as the summer capital of Rajasthan. It has attractive places to explore, which can knock the curious minds of travelers. Among all such locations, Toad Rock is an enormous rock structure. It looks like a Toad shape that is going to jump directly into the water. All the more, it is one of the astonishing buildings of Rajasthan. It is situated near Nanki Lake in Aravali Ranges. Toad Rock has named after the British army officer Col Todd, who founded Mount Abu. However, some of the theories suggest that it is present form 6 billion years.

Mewar Complex is a reflection of glorying wars. Historic ballads of Maharana Pratap who was the brave and great emperor of Mewar. It is one of the most astonishing buildings. The design is the concrete concepts that are a perfect blend of uncomplicated fluid spaces and natural textures. Constructed in 2008 by Arya Architects, it twists nature with the stories and experiences of great warriors.

Rajasthan School is a 3 level educational institution which has planned in open, closed, and semi-closed spaces. Sanjay Puri, a successful architect constructed its architectural design. The structure of the classroom is placed in the north block to extract indirect sunlight.

To sum up, in Rajasthan, one can experience diversity and art. Not only in its traditional forts but also in modern architecture. This is peculiar and mesmerizing. From modern techniques like 3D lights and GRC and illuminating lights to implanting water harvesting treatments. Today’s architects are not only solving climate change issues but also developing proper water-recycle systems in these astonishing buildings. They are focussing on the current needs of people that are indeed important in this contemporary world.

Follow Rajasthan Studio on Instagram for more amazing travel content. Reach out to us on email at contact[at]rajasthanstudio[dot]com. This blog is curated by Rajasthan Studio and written by guest author.