10 Of The Most Intriguing Temple Art Forms Of India 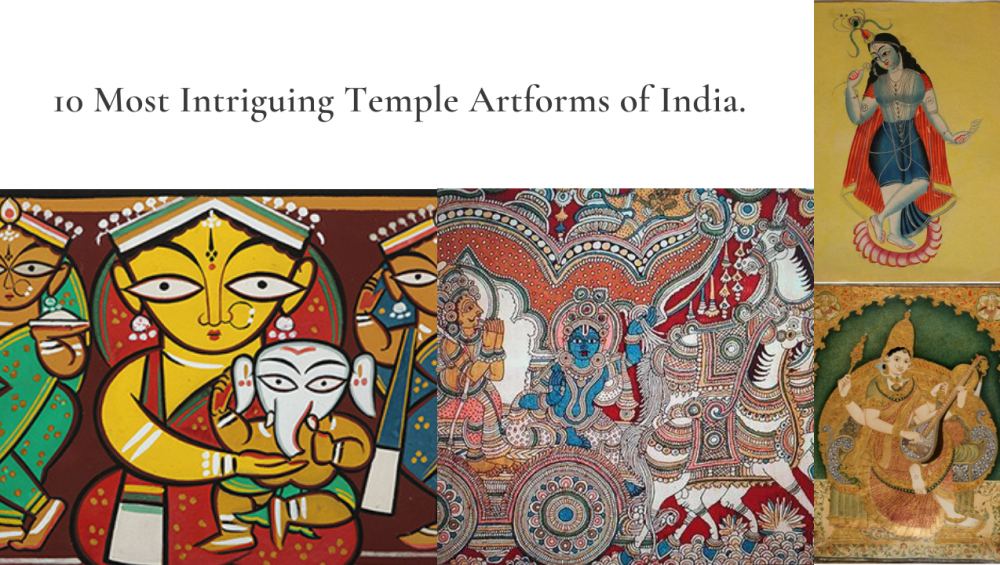 Ancient painting styles which have been passed from generations to generations have always left people awestruck. Even in the 21st century, these Intriguing temple art forms of India inspire artists and add liveliness to the Indian culture.

The vivid colour combinations, broad imagination, creative strokes, graceful details and a blend of different cultures have made these paintings a prime attraction for artists, tourists & historians from all around the world. Let’s look at the 10 most famous traditional temple art forms of India which even in the 21st century allures people into its mystical life.

The history of Madhubani traces back to the Treta Yug– the age of Ramayana. Adorable human figures, simple & elegant designs, vibrant colour combinations, are the features of Madhubani styles paintings. William G. Archer, a British officer, introduced the art of Madhubani to the western countries. Madhubani painting is one of temple artforms of India which is widely used even today.

This genre saw its rise around the 1850s in West Bengal. Unusual materials used to create a Kalighat painting is what makes it stand out. Squirrel & goat hair is used to paint this Indian artform. This enhanced the traditional temple architecture of Bengal. Kalighat paintings are dedicated to the Hindu Goddess Kali.

The Mysore Wodeyars gave birth to the splendid Mysore-style paintings. We see these temple art forms on the ceilings and walls of the Virupaksha Temple. One of the most Classic style of making a Mysore painting includes pasting 10-12 layers of paper followed by applying a paste of refined flour ! Fascinating isn’t it?

Tanjore Paintings carried forward the legacy of Brihadeshwara Temple. The Chola Dynasty flooded this temple with graceful painting style. Tanjore paintings are the result of a beautiful mixture of the Cholas, the Nayakas & the Marathas. Temple art form includes precise layouts, ornamenting with stones and embossing with a mixture of chemicals. Resulting in an everlasting look for decades to come.

The magnificent rath yatra of Lord Jagannath brings piousness to Orissa. The Pattachitra painting adds an electrifying look to the deities, temples, and walls. The traditional painter families living in Puri take immense pride in beautifying their Lord Jagannath. Dating back to the 5th Century BC, these enticing geometrical shapes, miniature designs, and contrast colours added to traditional architecture of the temple.

Kalamkari art is a 3000-year old painting style which was first seen in Andhra Pradesh. The amusing fact is that this style is more of a narrative artform and less of a temple artform! It literally means painting on a cotton sheet with a pen. This classical tribal artform travelled from villages to villages narrating the tales of India’s rich heritage.

Ganjifa art is as amusing as its name. Artists paint this traditional artform on small circular canvas. Ganjifa is a form of rhythmic, slender art and a popular card game of medieval India. This simple game has upheld the culture and heritage of India. Artists from Sawantwadi, Gujarat, Kashmir, Mysore, and Rajasthan are the patrons of this Indian artform.

Thangka is a meticulous folk art form that can be found along the borders of India and Tibet. Audience can clearly see the influence of Indian culture and Tibetian patterns in these paintings. Originally, monks used Thangkas to propagate Buddhism. Artists and monks create this flawless Thangka folk art on the walls of Tabo & Alchi monasteries. This kind of artwork isa twist to traditional Indian temple art forms.

Mandala art is the symbol of prosperity, peace and spirituality. Hinduism, Buddhism practiced mandala art often and added versatility to this age old art form. Graceful designs, symmetrical shapes, and contrast colours makes Mandala the most favoured Indian temple art form. The symmetry and perfection of a Mandala is a treat to the eyes.

Devi Bhadrakali, the symbol of power and anger this is why the painting style is aggressive in nature. The type of colours and patterns used to create this Goddess evokes a sensation of fear and humbleness. Bhadrakali painting is native of Basohli village in Jammu & Kashmir

India is a profound source of immense knowledge and rich culture. Various civilisations found their missing pieces of puzzles in this spiritual land. As a token of thanks, these civilisations gave India what today we call wonders of the past. Indian temple artforms, Hindu temple architecture, its vivid culture, its folk tales and traditions  are an inseparable part of these wonders.