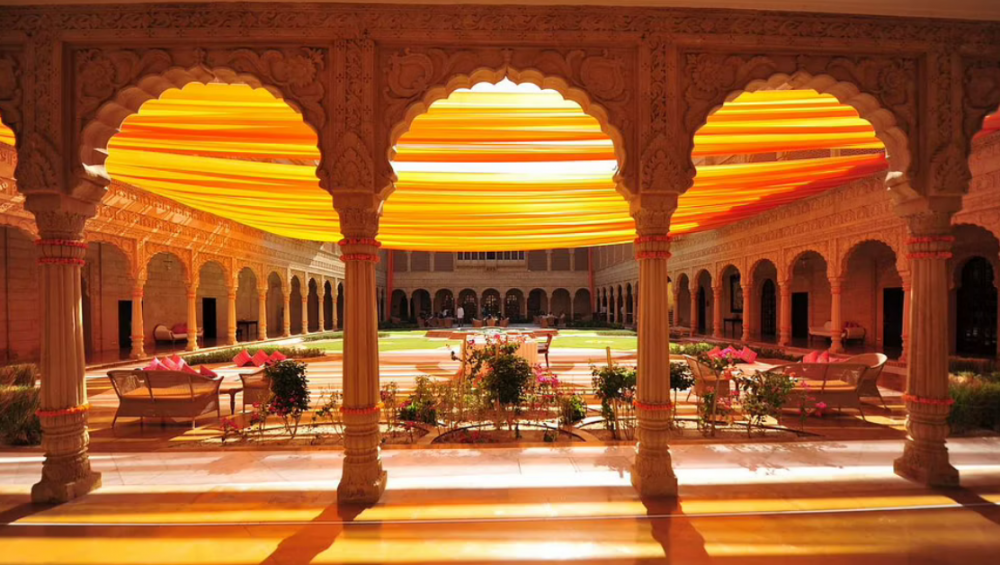 What is a Haveli?

A haveli is a traditional architectural style of the Indian subcontinent. It could either be a townhouse, a mansion, a fort or a palace. The word haveli is derived from Arabic hawali, meaning “partition” or “private space” and was popularised under the Mughal Empire. Then, today it is used as a generic term for various townhouses and manor houses.

As stated earlier, they became an inherent architectural component of urban environments under the Mughals. Although, since even prior to the Mughal rule in India. Courtyards have been a common feature of houses in the Indian subcontinent, whether they are mansions or farmhouses. These, however, employ very different architectural styles from traditional Havelis, that were developed under Muslim rule. In this blog we are going to see about the top 8 marvelous havelis in Jaisalmer.

This is one of the finest, oldest and the largest havelis in Jaisalmer. It is full of artistic work in each corner, be it gracefully carved pillars, façade or the balconies (Jharokhas). It bears expensive decorated items that were imported from various countries. The murals and interiors have derived inspiration from the Rajputi, Mughal as well as Victorian architecture. This haveli was constructed by two artisans simultaneously without copying each other yet resembling. In Jaisalmer, Patwas were very rich traders along the old silk route.

Hence, they built the Patwon Ki Haveli which took over 60 years to complete. Rajasthani home rooftops are commonly used for sleeping during the summers. And the Patwa Home rooftop has the most ornate sitting and serving areas. Towards the rooftop, traditional paintings adorn the staircases. The haveli, while open to tours, is still used for residential purposes for the descendants of the first family that owned the Haveli.

It is located in the heart of Jaisalmer, this haveli is was constructed by two Muslim brothers in the 19th century. And is highly appreciated for its marvelous architecture and intricate carvings. As one enters the Haveli, giant structures of two elephants – made of yellow sandstone – are likely to catch the visitor’s fancy. Therefore, the imagination of the architects of this edifice can be best understood through the numerous paintings, which are put on display on the walls. Besides, its amazing architecture also speaks highly of images of horses, cattle and other animals. Which are beautifully carved on the walls and pillars of the mansion.

The palace was built by Salim Singh, during his regime as a prime minister of Jaisalmer.  It also has beautiful stone carvings, splendid murals and latticed murals. The bracketed walls can’t be ignored either as they are specimens of excellent craftsmanship. Taking into account the tremendous popularity of Salim Singh ki Haveli Jaisalmer, a visit to this haveli is an integral part of the tours offered by the tour operators. You can avail any of the tours according to your preference.

The Shreenath Palace Haveli was built in the 15th century by the Vyas family. And is still occupied by descendents of the original inhabitants. With striking arches, delicate carvings and narrow staircases, this small haveli is a beautiful piece of history. Moreover, the interiors of this haveli-turned-hotel are a mix of the old and the new, with traditional hangings, old family photographs and colourful glass panels.

This haveli is a three centuries old royal haveli that now functions as a heritage hotel. With its vaulted ceilings, pillars and domes, this haveli definitely harks back to a different era. There’s even a large basement that once served as a royal stable! The Nachana family traces its lineage right back to Maharawal Jaisal, the founder of Jaisalmer. Legend has it that the kings who lived inside the Jaisalmer Fort were cursed and so this amazing haveli was built outside.

This palatial haveli has served royalties from British Viceroys to Bollywood actors. Designed by a British architect and local craftsmen, Jawahar Niwas Palace was envisioned as a ‘jewel in the crown’ and was used as a colonial guesthouse. Today, the untidy residence is a heritage hotel run by the 43rd ruler of Jaisalmer, Maharawal Brijraj Singh. The sandstone exteriors, carved chhatris and jharokhas make Jawahar Niwas Palace a sight to behold, especially at sunset.

Originally built by Maharawal Mulraj about two centuries ago, the Mandir Palace has seen a number of additions over the years and is presently a luxurious heritage hotel. The exquisite architecture is a reminder of the historic glory and craftsmanship of Jaisalmer. Many of the rooms were once personal suites of the elite! The unique Tazia Tower, the tallest structure in the city outside the fort, is also a part of the Mandir Palace.

Now a hotel, the Garh Jaisal Haveli is one of the old havelis that are a part of the 11th century bastion. While the bigger havelis offer a glimpse into the royal life, Garh Jaisal makes you feel like a common traveller in mediaeval times. One has to experience the understated stone carvings and typical haveli-style layout give this mansion a quiet charm.

The location of the hotel is excellent, right inside the fort and the views of the city and the fort are exceptional. As it is inside the fort, the Maharaja palace and the Jain temples are well within walking distance.

There are a number of Havelis in Jaisalmer which feature different types of architecture like Rajputana and Islamic architecture. All the havelis are made using yellow sandstone and have beautifully carved facades and beautiful oriel windows. The beauty of these havelis is truly unmatched. The spectacular architecture of the havelis speaks of the creativity and innovation of craftsmen of those times. It is a perfect tourist destination that has a perfect blend of historical significance and natural beauty. The variety of attractions serves perfectly for tourists of all types. Jaisalmer is one of the most historically important cities in Rajasthan. The various havelis and mansions of Jaisalmer is a reflection of the fact that the city is an integral part of the rich history of Rajasthan.

Follow Rajasthan Studio on Instagram for more amazing travel content. Reach out to us on email at contact[at]rajasthanstudio[dot]com. This blog is curated by Rajasthan Studio and written by Samira sarin.