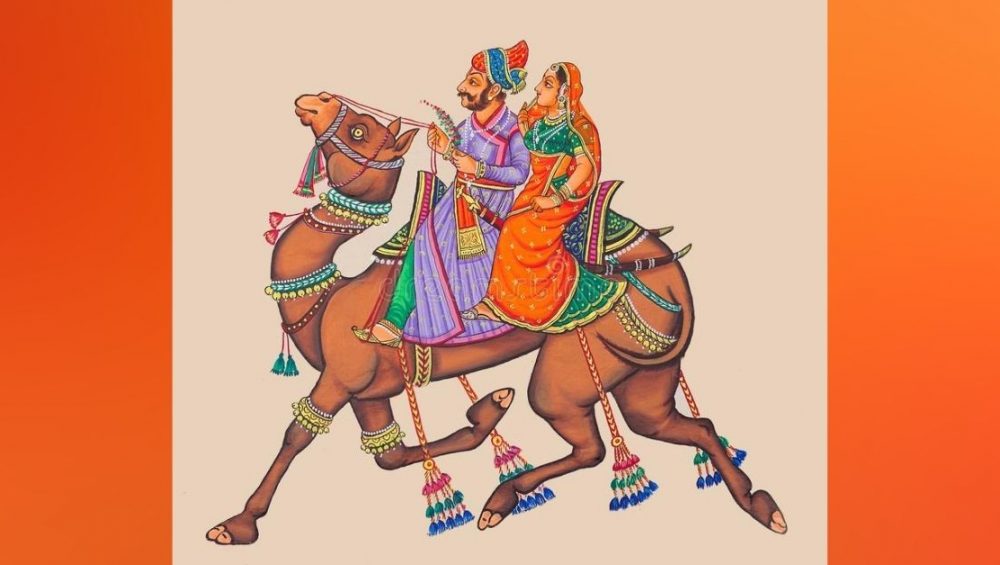 Powerful forms, exquisite details, the employment of fine brushwork distinguishes the Rajasthani paintings. In addition the use of vivid colours, which identically capture the attention of each and every observer. The most well-known subjects in Rajasthan were a religion. Most of all the Rajasthani Painters organically grown colours by themselves and utilised them in the creation of these Rajasthani artworks, with no added chemicals. All the paintings have natural colours. Like relics, flora, valuable stones, and precious metals cuttings. On the other hand, brushes were made from squirrel, horsetail hair or tree twigs. Here’s a list of the famous painters of Rajasthan and its art and culture.

One of the most famous Rajasthani painters, his painting is intimately related to the period of Mewar monarch Maharana Jagat Singh I in Udaipur. Sahibdin was introduced to the Mughal style earlier on, most likely at the Udaipur castle; which influenced his portrayal and a Mughalesque commitment to dignified details. He looks to be Nasiruddin’s successor to the aesthetic. From the works, we can undoubtedly see the inheritance of his regime’s rich hue and raw emotion.

For the following thirty years, Sahibdin seemed to have controlled the Mewar artworks, producing a succession of masterpieces on romantic themes such as the Rasikapriya and the Ragamalas. Not to mention, his religious works are most prominently the Gita Govinda that tackle similar topics.

Nagari Das was impressed by an artist in town named Nihal Chand; who as a matter of fact was an unparalleled expert in representing Krishna and Radha. Nagri Das’ court artist was Nihal Chand. In like manner, he was the one who created the well-known Bani Thani. Bani Thani is also seen to keep lotus buds in her hand that symbolise her purity; identically to the purity of the goddess Radha. King Sawant Singh was so passionately in love with his fictitious sweetheart that he surrendered the kingdom in about a decade to go to Brindavan and worship his lover Radha as Bani Thani and live like his lord Krishna. He lived as a monk in Brindavan till the day he died. This distinct painter, among many other famous painters of Rajasthan, Nihal Chand continued to paint for at least 15 years until his death.

Bundi style is distinguished by its fusion of Mughal and Deccani aesthetic elements. Bundi artworks are famous for depictions of Krishna-Lila and Rasikapriya. One of the earliest instances of Bundi art is a picture of Bhairavi Ragini at the Allahabad Museum.

In the picture, a woman disciple prays at a Shiva temple within a royal courtyard, with a lotus lake in the backdrop. She has placed beautiful floral offerings on the deity and, as we can see, is singing carols in honour of her Lord, accompanied by handbells (manjira). Intense, bright hues emphasise the main focus of this image, the devotional emotion.

Painter Nuruddin served at the kingdom of Bikaner from 1672 to 1696. It is a crisp and basic composition with minimum and expressive portrayal of architectural and landscape components.

This artwork, Krishna Swinging and Radha in Sad Mood, depicts Rasikapriya; and Nuruddin has cleverly divided the picture into two halves by using a gentle rolling mound in the central front. Here in the painting, a princely interior is depicted by an architectural structure in the top section of the artwork. While a few bushes on the green meadow imply a wild as well as a peaceful scene. At the same time Krishna, reclining on a hammock in the upper portion of the artwork; appears to be having fun in the presence of a Gopi at her home. When she learns about his meeting, a devastated Radha flees into the forest and discovers herself alone underneath a shrub. Indeed this famous work of Rajasthani painter is in the possession of the National Museum in New Delhi.

Why is art so good?- https://rajasthanstudio.com/did-you-know-the-best-benefits-of-art-therapy/

Last but not the least, Artist Dana, yet another popular painter in the long list of famous painters of Rajasthan, was from the time of Man Singh’s reign, where he made “Chaugan” portraying a princess playing Polo (chaugan) with her pals. This is a Jodhpur style of artwork. It may or may not be from the functional organizational structure. It shows stylistic influences from many other schools. Which also includes Deccani in the depiction of horses and Mughal in the depiction of women. Additionally, the flat green background suggests the traditional fondness for flat surfaces. On the upper section of the artwork; there is a line that translates as “beautiful maidens on horses, playing.” The artwork was completed in 1810 and is now housed at the National Museum in New Delhi.

Furthermore, Rajasthani paintings rose to prominence throughout the mediaeval period. And all the credit goes to the support of royal rulers from various districts of Rajasthan. This earned them the signature of Rajputana. And these works of art, are all famous paintings well-known around the world.

Follow Rajasthan Studio on Instagram for more amazing art and travel content. Reach out to us on email at contact[at]rajasthanstudio[dot]com. This blog is curated by Rajasthan Studio.