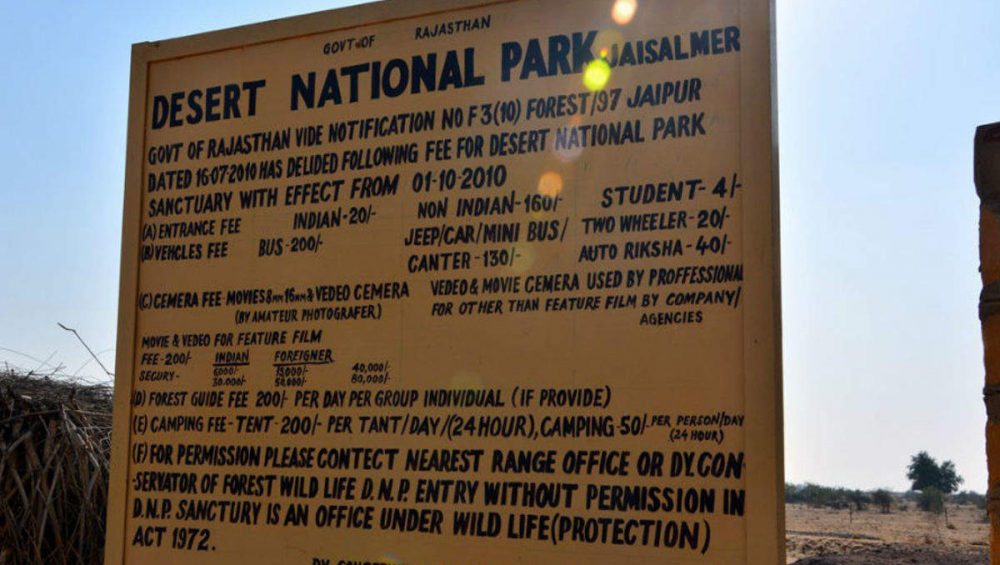 Despite a fragile ecosystem, the national park is famous for being a host to various migratory and resident birds. Common bird species found include Short Toed Eagles, Tawny Eagles, Spotted Eagles, Laggar Falcons, and Kestrels. One can spot sand grouse near small ponds or lakes. The Desert National Park also has some seasonal visitors like Demoiselle Crane and Houbara Bustard that migrate to the Sanctuary during winter and Bee Eaters, Larks, Shrikes, etc are present throughout the year.

The vegetation is sparse and patches consisting of Sewan grass and Aak shrub. Plants like the Ronj, Palm trees, Ber, and Dhok grow in abundance in the region. Khejri, a plant that is commonly found throughout the Desert National Park, is revered and protected by the local communities, especially the ‘Bishnois’.

The Gadsisar Lake, present in the region, welcomes thousands of migratory birds every year. It is among the many tourist attractions of the Desert National Park.

The Indian Bustard, an endangered bird species, is also found in the Desert National Park. It is said that this is the only place left where these magnificent birds can be found. Brown and white in color, the Bustard is a meter tall and has long bare legs and a long neck. You can usually spot them near the Sudashri water hole.

There are 73 villages and also settlements or Dhanis existing within the Park. These communities have inhabited this area for hundreds of years and with their rich culture and tradition, they are an integral part of this ecosystem. Other tribes include Bishnois, Bhils, Minas, Lohars, Garasians, Sahariyas, and Rabaris.

The Desert National Park is a part of Jaisalmer where the winters are generally pleasant and appealing. The daytime temperature is around 22 to 24 degrees. The winter nights in Jaisalmer are cold, with temperatures dropping as low as 7 to 8 degrees.

The summers tend to be sweltering hot. In summer, the daytime temperatures go as high as 40 degrees with nights experiencing a significant drop in temperature.

As this place is located within the heart of the Thar Desert, rainfall is almost equivalent to negligible. In fact, the Jaisalmer region of Rajasthan witnesses extreme dryness for a significant part of the year.

Hence, the best time to visit the Desert National Park would be between the months of October and March. The climate is moderate during February-March, resulting in the Desert Safari being a pleasant experience.

Jaisalmer is well-connected with Rail and Roadways. But, if one plans to go by Air, the nearest airport is at Jodhpur, which is 300 kilometers from the site. The ‘Palace On Wheels’, an exotic train is a great way to enjoy the Desert Experience. Jaisalmer Railway Station is very close to the Desert National Park and it takes around 20 minutes to reach.

Deluxe and ordinary bus services are also available for tourists to visit by road. One can board these buses from Jodhpur, Bikaner, Jalore, Jaipur, Barmer, Ahmedabad, etc.