Aladdin Exploring the Streets of Rajasthan 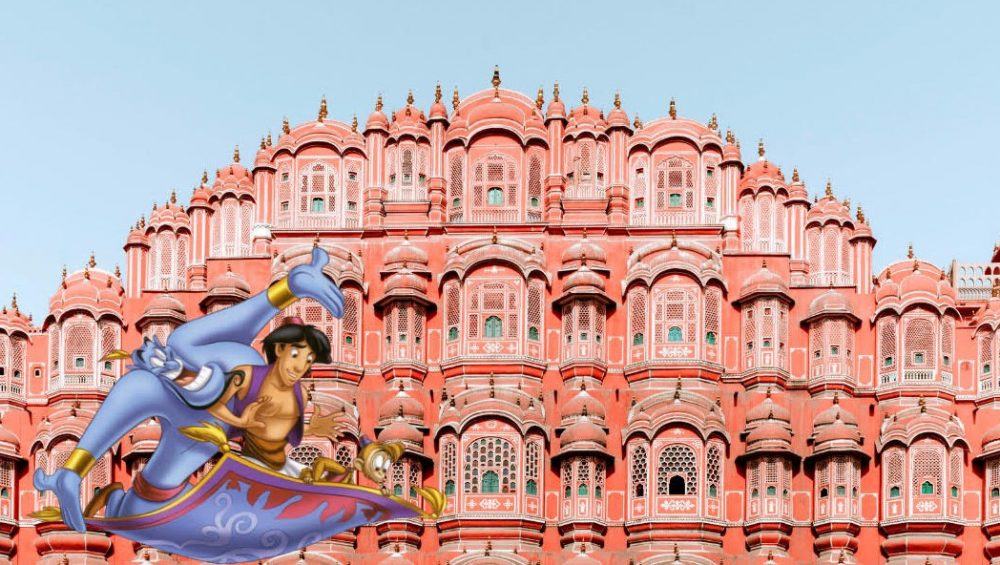 When Aladdin first got on the streets of Jaipur, he walked on his feet. With his princely clothes on, he did attract some attention from locals. But that day was less about him, and more about the pink city. The sounds and colors of the local streets weren’t entirely new to him, given that he grew up in Agrabah.

Yet he couldn’t help getting drawn to the pink structures running parallel to the roads. The houses, hospitals, shops of various sizes and demeanors, the green-black autos, cycle rickshaws, umpteen little two-wheelers, and a huge tree jutting out of a temple looking structure in the middle of the road. He reminded himself of the purpose he was sent here: to do a recce for a movie shoot.

Of the five locations that the Location Department of Disney had listed, Rajasthan’s Jaisalmer Fort was one of them. Although Aladdin wondered why he was offered to go on a recce, he decided that this would provide him a good time off from the green rooms and Disney studios.

Initially, he had only heard about Rajasthan from his last girlfriend, who had spent three weeks there. She wouldn’t stop raving about it! Especially, the heritage trodden trip she had made there. So he bought Lonely Planet India, packed the essentials mentioned, and booked his plane ticket to Jaipur.

What Aladdin Saw There

The deafening honk of a van and the riot of colors glaring from the shop opposite caught him off guard. The shop had on display colorful turbans of royal patterns. He walked up there and checked the price label of a purple turban– it said ‘Rs. 855/-‘, and after a quick conversion to the dollar, he decided to buy it.

The shopkeeper, who had gauged that he was a foreigner, offered him a glass of sweet-tangy Panna. ‘It’s a famous summer drink here made of raw mango, it will help to keep the heat away,’ he said.

Aladdin began his journey to Jaisalmer the next day. Taking an aerial overview of Jaisalmer on his carpet, he literally had the monuments of luxury at his feet. The valor that the sites personified transfixed him. The visuals of the enemy troops struggling their way to the forts and relinquishing their claims mid-way.

The largeness of the host city was already visible in the way people treated him on his first day in Jaipur. The next three days he would fly in and out of the fairytale palaces. Also, he would jump along the expansive walls that fortified the past kingdoms.

Immersing Himself In The Rich Heritage Of Rajasthan

At the end of his magic-fuelled carpet flight, the Ghar or gads (forts) mesmerized him. The water tanks at the base of these hilly forts tranquilized him. A camel and a monkey for company stretch of dried red chillies, and a treasured imagination with a background score of Bhopa singer rendered a perfect frame to the sand dunes. Aladdin found himself in his cinematographer’s shoes.

The magic yielded in every direction, in every object and art form. The wooden puppets, the meenakari garden tables, the colored bandanas, the change in hands of mustached Rajasthani folk, camel skin water bottles- every element had a story in it. It was difficult not to stretch your imagination and find yourself in a fantasy sequence on encountering these, especially so for our Aladdin here.

There were women wearing silver accessories and the red henna/mehndi on their palms- each character had a symbolism. Normally, the Ghoomar was presented as a motif as well as a dance form. The only thing missing in this antiquely elaborate set was a camera and a crew. During his final call reporting, Aladdin smiled his boyish smile, feeling indeed like a street urchin- the character portrayed from the original.

‘The chaos of arranging for the shoot and controlling the locals on the set is one challenge we would face. But I would say it is worth it! Given the visual magnificence and the richness this place provides! In conclusion, get your animators on board, and crew ready, for the show must begin here’, he told his team back in Hollywood before logging out on day six. This is the story of how a considerable part of Aladdin in Magic Land was decided to be shot in Rajasthan in 2025.