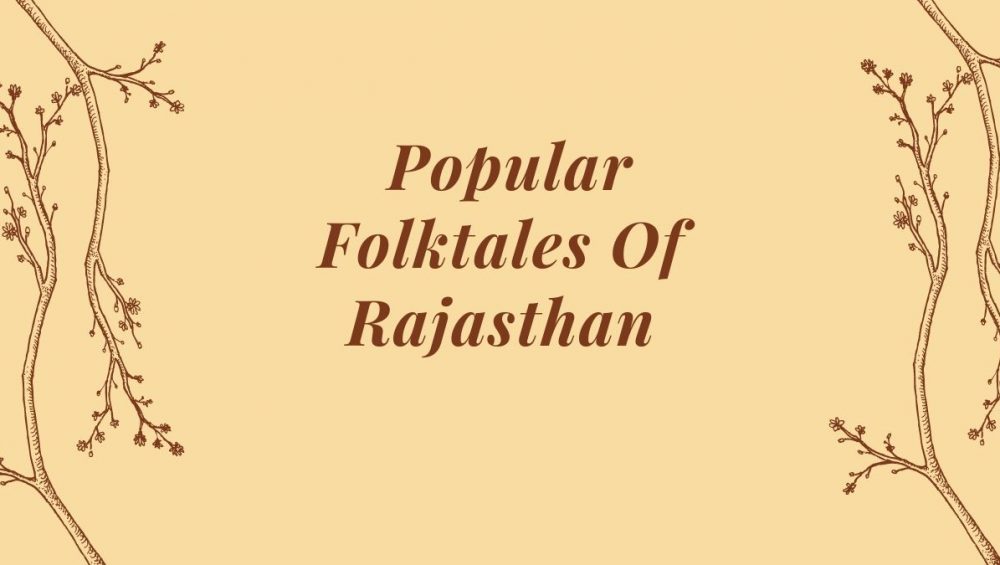 What comes to your mind when you think of Rajasthan? Is it the great forts or the vast desert or is it its rich culture and history? Embedded deep into the Rajasthani culture lies the tales of brave kings and queen; of animals, farmers and nobles and of sacrifice and love. These folktales tell us the day-to-day struggles of Rajasthani people. These live deep in the desert facing challenges amidst the sand dunes every day.

Today, learning about folktales is more important than ever. Folktales connect children to one of the ways a culture instils a sense of moral behaviour. Growing children benefit from reading these folktales. These serve as a gateway into other cultures as well as a mirror into their own culture. Let us take a closer look at some of the Popular Folktales of Rajasthan that enable children to focus more clearly on facets of the Rajasthani way of life.

Nobles chose Banvir, a valiant soldier, to be Vikramaditya’s protector. Instead of protecting the royalty, he took advantage of the situation to further his own ambition. Banvir was a warrior with a lot of courage. He believed that the only people standing in his way were Vikramaditya and his brother, Uday Singh. He secretly conspired to kill both. After he assassinated Vikramaditya, a maidservant spotted Banvir. Seeing his crimson sword, she promptly informed Panna of the cruel deed. She added that Banvir was now coming for Uday Singh.

Panna Dhai, as an ultimate sacrifice, saved the only living heir to the throne of Mewar: the youngest Uday Singh. She concealed Uday Singh in the basket. She covered him with fruits and the future Maharana of the Mewar was out of the reach of Banvir. Panna placed her own sleeping son Chandan, on the bed of Uday Singh, who was killed by Banvir. After travelling through villages and palaces, she took refuge in another Rajput kingdom for a few years before returning to Mewar and reinstating Uday Singh as the rightful heir to the throne of Mewar. If not for panna dhai who showed bravery and sacrificed her own child without a moment of sorrow, the crown of Mewar would be held by someone else.

The Dhola-Maroo tale honours Maroo’s loyalty and patience, Dhola’s valiance, and their undying love for each other. Dhola, the prince of Narvar, and Maroo, the princess of Poogal are integral to the story. Hence, they married as children, which was a common practice in Rajasthan. Dhola forgets about the marriage after his father’s death and marries another princess, Malwani. The king of Poogal then sends a party of folk singers to Narvar under false pretences, and they successfully inform Dhola of his marriage to Maroo.

Dhola overcomes the obstacles erected by Malwani and Umar Sumar and arrives at Poogal, deeply regretting his mistake. By divine intervention, a group of saints hears his cries and grants Maroo life through their magical abilities. The cruel Umar Sumar attempts to destroy Dhola with his weapon once more, but this time Dhola-Maroo escapes by riding on a wonderful flying camel provided to them by a group of saints.

Rao Chundawat Ratan Singh and his beloved wife Hadi Rani of the Handa Rajput Clan are buried in Rajasthan folklore. The sacrifice and valour both shown in annihilating Aurangzeb’s army and reaching the Zenith of Immortality are not known by many people. Handi Rani holds a special place in the golden history of Rajasthan, especially Mewar

This story revolves around a traveller who was passing through the Thar Desert and wanted to rest under a tree’s cool shade. Soon after, he found one and rested under its shade. After some time, the traveller wondered if there could be enemies or even a demon around. The next moment a demon appeared out of nowhere. Then the traveller wished aloud if the demon could disappear and lo and behold it did! He then realised that the tree was a wishing tree indeed, he thought of the things that he could wish for: from horses to the best of chetaks! Ultimately, This popular folktale of Rajasthan teaches an important lesson: be careful what you wish for because it can come true!

Be it roman folktales or these popular folktales of Rajasthan were designed to instil wisdom and critical thinking skills in the common folk. Therefore, these precious folktales continued to be told over generations to come. Today they represent the way of life, defeating evil and the tales of gods and goddesses and continue to educate children even today.

Also follow Rajasthan Studio on Instagram for more amazing art and travel content. Reach out to us on email at contact[at]rajasthanstudio[dot]com. This blog is curated by Rajasthan Studio and written by Ayraki M