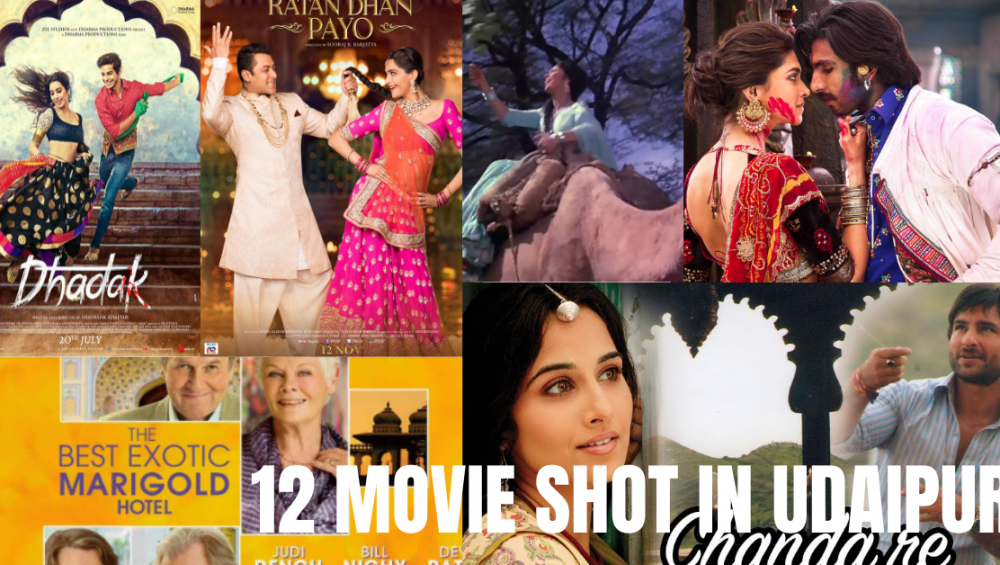 When it comes to movies, aesthetics and beauty are all that matte! What better place than Udaipur in Rajasthan to choose to create a fictional world in! Due to its all year round scenery and weather, Udaipur has been dubbed “One of the most Heavenly Places” and is on the wish lists of many renowned Bollywood and Hollywood directors. Also called, ‘Venice of the East’, with its fortunate gorgeous flora, lakes, and attractions. It has the allure to entice everyone to come and visit once. And those of us who can’t go and experience the city’s beauty physically can always take a trip to the nearest movie theatre! Therefore, here comes that which are the movies shooted in Udaipur.

12 of the Best Movies Shot In Udaipur

One of the first movies shot in Udaipur was a romance drama starring Waheeda Rehman and Dev Anand. The film is based on a well-known novel by R. K. Narayan, which is largely regarded as one of the Indian cinema industry’s achievements. Dev Anand, the evergreen hero, shot the opening scenes of Guide in Udaipur’s City Palace Complex. Although it is one of the most beautiful movies shot in the city palace Udaipur.  Moreover, Waheeda Rehman stars in the song “Aaj Phir Jeene Ki Tamanna Hai,” which was shot at Chittorgarh Fort.

Though the renowned dance song “Jhumka Gira Re Bareilly Ki Bazaar Mein” is associated with the film, it is worth watching for the beautiful splendour of Udaipur. Some superhit songs of the movie are “Jhumka Gira Re”,” Naino Mein Badra”, and “Tu Jahan Jahan Chalega”. Moreover, some parts of the movie were shot in Udaipur at Dudh Talai, Lake Palace and Jagmandir Palace. Song ‘Naino Wali Ne’ from the film, with Jagmandir Palace in Udaipur as the backdrop.

This film, directed by Karan Johar and starring Jahnvi Kapoor and Ishaan Khattar, was released in 2018 and takes you on a virtual tour of Udaipur. Nevertheless the historic city of Udaipur is emphasised throughout, making for a captivating experience.

If you remember James Bond’s style and gestures, then this film will bring back memories for many fans. Jag Mandir is the thirteenth instalment in the James Bond series, starring Roger Moore as a fictional MI6 agent. Octopussy (1983). Although the 13th James Bond film, opened the doors of Udaipur to a large number of foreign tourists. Also as the film was shot in various locations throughout the city, including Taj Lake Palace, Jag Mandir Palace, Jagdish Chowk, Monsoon Palace, and others, depicting the city’s allure in each shot.

If you remember the song “Cham Cham Chamakti Sham Hai…”, you’ll know what I’m talking about. Then there’s the fact that Lake Palace Udaipur hosted the film Yaadein, starring Hrithik Roshan and Kareena Kapoor. The Subhash Ghai film, shot in 2001, was shot in selected Indian locations including Udaipur besides foreign locations like Malaysia and UK. Some scenes are shot in Udaipur at Jagmandir Island Palace including the song “Chhan Chhan Chhalakta Noor Hai”. We can also see a lot of regal elements throughout the entire setup. Therefore Boats, heritage chambers, and the walkway to the deck are all featured in a few clips.

Dhamaal is a Bollywood comedy film directed by Indra Kumar and produced by Ashok Thakeria that was released in 2007. Moreover Sanjay Dutt, Ritesh Deshmukh, Arshad Warsi, Javed Jaffrey, and Aashish Chaudhary are among the cast members.

Indra Kumar directed the comedy film, which was produced by Ashok Thakeria. Sanjay Dutt, Ritesh Deshmukh, Arshad Warsi, Javed Jaffrey, and also Aashish Chaudhary are among the cast members. Moreover it was a fantastic comedy, and the film was a semi-hit in India. Aside from the prime site of Ravla Khempur, the film had images from Pichola (50kms from Udaipur). Although Badi Paal, Sajjangarh, and other sites are likely to appear in the film.

Famed for his role in the film Slumdog Millionaire, Dev Patel stars in this comedy film was one of the Hollywood movies shot in Udaipur and Jaipur. Nevertheless from the prime site of Ravla Khempur, the film had images from Pichola (50kms from Udaipur). An old historic property with an open backyard, gardens, and lovely domes was used to film this film. The property (a Royal Palace – Ravla Khempur) has become so well-known that the owners have installed a sign bearing the title of the film and converted it into a tourist attraction.

One of the overwhelming concepts of romantic and comedy movies shot in Udaipur was produced by Karan Johar and directed by Ayan Mukherjee. It was one of the most popular movies shooting in udaipur. The movie has the impeccable chemistry between Ranbir Kapoor and Deepika Padukone that floated well in the beauty of Udaipur at the location of Badi Lake, Gangaur Ghat, Udaivilas, and City Palace.

The blockbuster popular Indian drama directed by Sanjay Leela Bhansali starring Deepika Padukone and Ranveer Singh was one of the Bollywood movies shot in Udaipur. Hence, the regions of Gangaur Ghat, Hanuman Ghat, and City Palace were used to film several scenes in this film. Moreover it was the most award-winning and highest-grossing Bollywood film, telling the story of a couple from opposing communities who defied all odds to be together. Goliyon Ki Raasleela-Ram Leela was another of his masterpieces, with various scenes shot in our hometown of Udaipur. Ranveer Singh also plunged into Lake Pichola from one of the historic city’s ghats in one scene.

A family film with Salman Khan romancing Sonam Kapoor and depicting royal courtesy is a pleasing movie shot in Udaipur. This film, directed by Sooraj Barjatya, includes several moments that depict the grandeur of Udaipur. It’s no surprise that the filmmakers chose Fateh Garh, Kumbhalgarh, and Jag Mandir to depict the Prince and Princess’ ancestral lifestyle.

For a long time, Udaipur has been a welcoming home for the film industry; its natural scenic beauty and earthy familiarity have made it one of India’s most popular filming locations. Due to the rise of movie shoot in Udaipur,  the city now has a number of line producers who ensure that all of the arrangements are in place to help the process go as smoothly as possible, which is yet another reason why the city is included in more Hollywood and Bollywood films.

Another good news for upcoming movie shooting in Udaipur is the state’s new policy on film shot in udaipur and other cities. Therefore, the state Cabinet has adopted the Rajasthan Film Tourism Promotion Policy 2022, which is expected to promote film production in the state. Rajasthan has drawn film producers to shoot films with its forts, palaces, sanctuaries, and desert for the past 75 years.

Also follow Rajasthan Studio on Instagram for more amazing travel content. Reach out to us on email at contact[at]rajasthanstudio[dot]com. This blog is curated by Rajasthan Studio and written by Aryaki M.