Why is Rajput Painting famous in Rajasthan ? 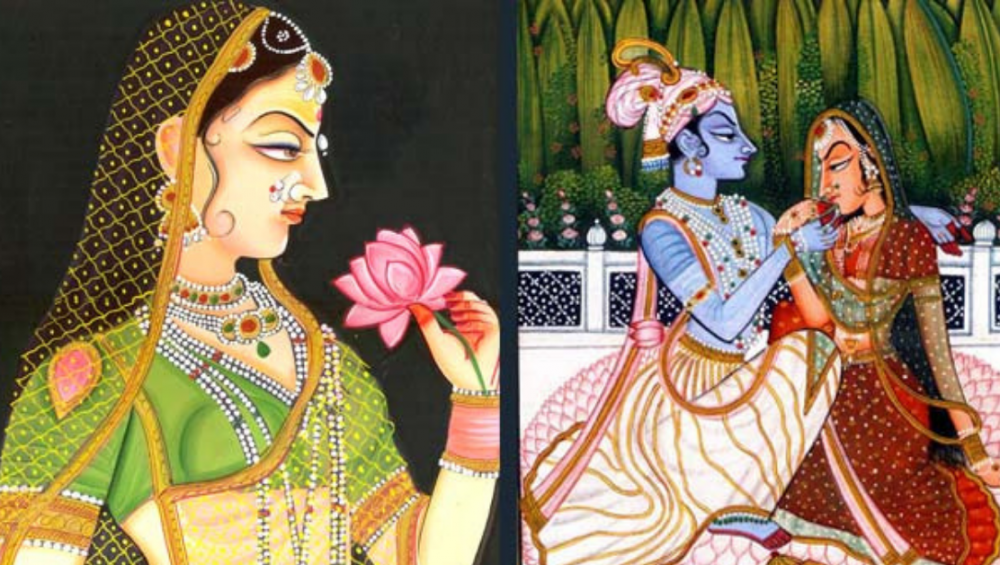 Rajput Painting of Rajasthan is one of the most famous art forms. They are a legacy of India’s medieval age. The vitals of Rajput painting characteristics showcases the courage and valor of the Rajput. But why are these paintings so famous? The Rajput illustrations feature an electic mix of themes from myths and legends. Scenes from the lives of gods and goddesses, to depictions of daily life.

Where Did Rajput Paintings Come From?

According to the Rajput painting information, the origin of Rajput painting images can be traced back to the 16th century. After Delhi was captured by Emperor Akbar, many artisans were brought from other Indian regions. To present their skills in painting and designing for Mughal Emperor’s court. These artists fought for their master’s pride, proving the courage of Rajputs. During this time, the first Rajput painting style was produced. Along with much other artwork such as miniatures, calligraphy, and masks.

The Rajput style painting was at the height of its popularity during the 17th century. When it became a favorite with families who belonged to India’s nobility class. Some even found themselves as prized possessions in royal courts across Europe.

The Rajput style of painting is called Pahari. Because it is mainly found in the hilly regions of northern India. These regions are located in the foothills of the Himalayas and were once considered remote and isolated. However, these regions now form part of large cities such as New Delhi, with their rapidly expanding population.

The Rajput painting history is intertwined with the history of other Indian art forms. In addition to its prominence as an art form, it has also had a significant effect on other art forms in various ways – by inspiring during the artistic and design process, influencing the style of paintings in different Indian regions.

Schools of Rajput painting were laid out by the end of the 18th century in Jaipur, Jodhpur, and Kota. These schools have a standard style and tradition. The Marwar School was well-known for its “Jodhpur Style.” It is best known for its depiction of female figures with minimal ornamentation. The Dhundar School is famous for the “Jaipur Style,” considered more vibrant and lively. The Hadoti School is most famous for its Jaipur Style, which makes bolder use of color and a greater sense of depth compared to others.

Each of the three schools has a distinct palette, consistent with the traditional and classical styles of Rajasthani painting. The primary colors are usually yellow, blue, and red. Their designs never include black or white since they do not appear in nature.

For instance, Rajput Painting of Rajasthan typically have earth-toned colors and quiet or subdued shades. However, some paintings use bright colors such as orange and red used by Rajput feudal lords like Maharaja Ganga Singh of Dholpur State (1888) and Maharaja Umaid Singh (1905) for displaying their glory and splendor to their subjects.

How Are Rajput Paintings Popular Nowadays?

Nowadays, Rajput paintings are trendy. One reason is that some of the famous Rajput paintings and Rajput mural paintings have been displayed in galleries in India and abroad. Also, the origin of painting on Tripti is still prevalent. It is promoted through workshops in Rajasthan organized by several organizations and individual artists who pass their knowledge to younger generations.

The Popularity of Rajasthani Painting Also Carries Over Outside India

India-based Chateau de Meslay assisted in selecting the best Rajput paintings from Ajmer, Jaipur, and Udaipur to be displayed at the British Museum in London. After receiving the paintings from their artists, India-based Kala Bhavan mounted them on transparent glass panels and then set them up in its gallery. The gallery has already gained immense popularity among foreign tourists.

There is no doubt that the Rajput Painting of Rajasthan is very famous. Its popularity proves that it will remain in people’s minds for a long time.

So the next time you visit Rajasthan, don’t forget to indulge in this creative and mesmerizing art form that’s one of a kind.

Follow Rajasthan Studio on Instagram for more amazing art content. Reach out to us on email at contact[at]rajasthanstudio[dot]com. This blog is curated by Rajasthan Studio and written by Romana Shaikh.