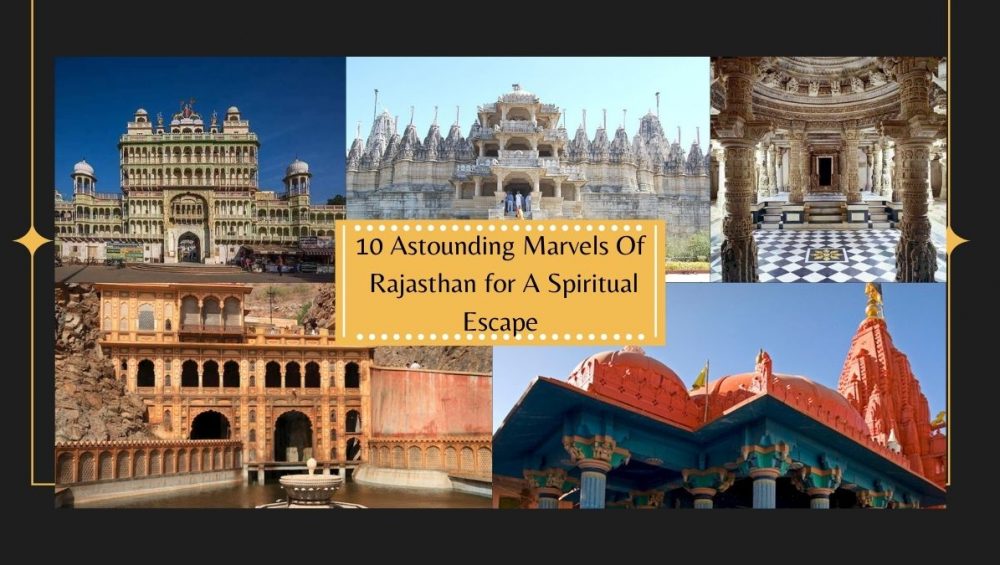 Spirituality in Rajasthan has played a key role in molding Rajasthan’s cultural identity. Today, religions dating back to more than 4000 years still have their roots and customs in Rajasthan. Though, Hinduism overwhelms many religions celebrated in the state. The temple disciplines the worship of Brahma, Shiva, Shakti, Vishnu, and other deities. Kings during their reign erected many mesmerizing Hindu temples on the soil of Rajasthan. Thus they have a great historical significance today.

Apart from Hinduism, Jainism and Islamism are the most followed religions in the state.  Other than this, only one Jew and nearly 85 Parsis registered for other religions in the Census report for the state. There are numerous temples and mosques widespread in the state enriching the heritage. Many of the renowned and famous spiritual pilgrimages of India encompass Rajasthan. Along with the popular forts, palaces, and other monuments, you must explore these fabulous marvels.

Enticing a huge number of devotees and tourists from all around the globe. Centuries-old temples reflect the divine and ravishing architecture of ancient times. Through these temples, you can discern more about Rajasthan’s culture, tradition, and religion. In fact, you’ll get to know about Rajasthan’s traditions, rituals, and local beliefs.

Along with the popular forts, palaces, and other monuments, you must explore these fabulous spiritual marvels. Let’s dive into spirituality in Rajasthan and head to the best pious and virtuous escape. Here are the 10 most divine religious places to visit in Rajasthan.

Eklingji is a Shiva temple. Located in a small town Kailashpuri, 22 km away from Udaipur. Also, the town is popular as Eklingji because of the popular temple. King of Mewar, Eklingji Nath has been the deity of the Mewar. Built-in 734 AD and has 108 temples within the premises. The temple has a large Mandal and exquisite carving on every corner of the temple. This pyramid-shaped temple has a 50 feet tall idol of four headed Shiva facing in each direction. Also, the spirituality in Rajasthan will make you feel optimistic and at peace.

Birla Temple, a significantly new temple built in 1988 by the Birla Group of Industries.  Constructed on the footing of Moti Dungari hill accompanied with yet another famous temple, Moti Dungari Temple. Just like other Birla temples, even this temple worships Lord Vishnu and Goddess Lakshmi. Both, the day and night look of the temple will leave you startled. The temple contains three huge domes and a beautiful garden.
The walls having carvings of mythological events and also have idols of saints, philosophers, and other historical and spirituality in Rajasthan.

Built-in 1400s and dedicated to Karni Mata. Temple can be tracked down to 30 km away from Bikaner at Deshnoke. The most amusing thing about this temple is there are approximately 20,000 living and revered rats in the temple. The offerings made here by the devotees are firstly eaten by the rats, later given as prasadam. The goddess is also the incarnation of goddess Durga. There is a story behind the rats of the temple. Karni Mata requested the god of the death of Yama to reincarnate the son of a storyteller. However, Yama forbade the help and Karni Mata promised all the male storytellers to be reincarnated as rats in the temple.

Bhrama Temple is as ancient as any other temple, dating back to 2000 years old. It is near the vicinity of Pushkar Lake. Honored to Lord Vishnu with few idols of Lord Saraswati. The temple’s construction is from white marble and stone slabs. The temple with a high tower can be glimpsed from a far distance. There is a belief that the Lord Brahma came to earth and performed yajna at the place where the temple stands now.

Ajmer is one of the most significant spirituality in Rajasthan for all Muslims. Built by Mughal Emperor Humayun, features an enormous series of well-carved doors when you enter the dargah. The Dargah is at the foot of a hill and is a Sufi Shrine. Persian Sufi saint, Khwaja Moi Uddin Chishti is enshrined in this holy place. According to the beliefs, he was the descendant of Muhammad. It has a belief that, if you beseech for anything with a pure heart at the Ajmer Dargah, it is bound to come true.

Dilawara, a prominent Jain temple is famous for its finest architecture. It is located 2.5 km away from the famous hill station. The temple consists of 5 temples built during different periods by Jain devotees. The 5 temples embrace the idols of five Tirthankars namely, Shri Mahaveer Swami, Shri Adi Nath, Shri Parshav Nath, and Shri Nemi Nath Ji. All five of these dates back between the 11th to 16th centuries. Intricate carvings on the marble and the outstanding craftsmanship of the workers will leave you spellbound. And will add more peace to your spirituality in Rajasthan.

Galtaji Temple is 10 km away from Jaipur city and is an ancient temple. The temple consists of few more temples and a water tank to take a holy dip. The temples here are mainly of Lord Balaji and Lord Surya (Sun God). Also, it is popular as Monkey Temple as there are numerous tribes of monkeys living here. Makar Sankranti is the most commemorated festival in the temple. However, the well-versed architecture of the temple is best among the restored ones.

The Temple in Udaipur is dedicated to the incarnation of Goddess Durga, i.e. Ambika Mata. Built-in 961 AD, referred to as the Khajuraho of Rajasthan. It also comprises the sculptures of Goddess Lakshmi and Brahmani. Pentagonal shaped temple has completely explicit architecture compared to other temples. Navratri is the festival when you shouldn’t miss visiting the temple. Those 9 days of Navratri have the most vigorous zeal, admired in all religious aspects.

Jhunjhunu is the most ancient and evolved town of the state. 400 years old temple is on the hills of Jhunjhunu. In fact, is the oldest pilgrimage site in India. The main temple is dedicated to Rani Sati. It is one of the largest. The temple gives a breathtaking view due to its vastness.