Kota- The City of Dreams and Much More 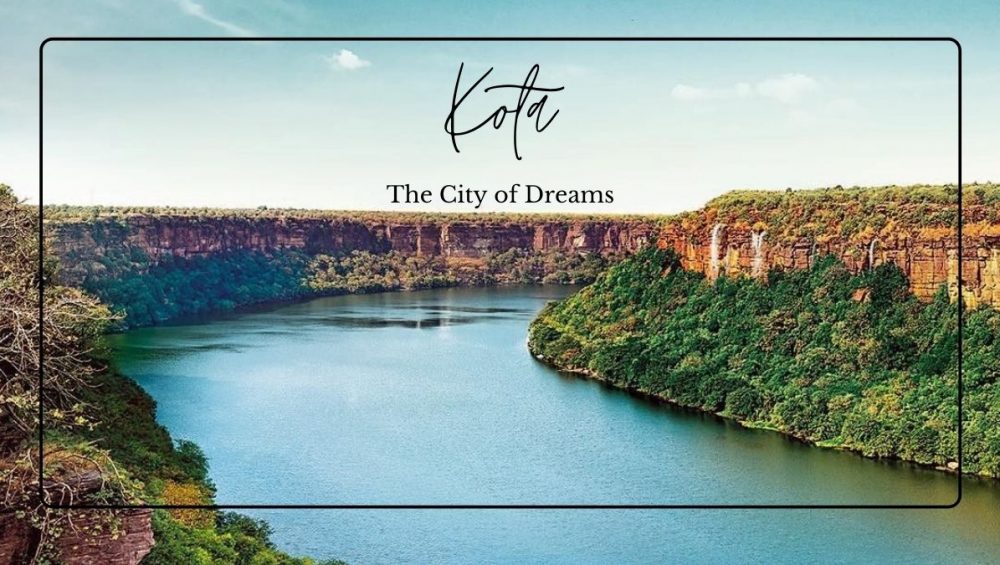 The city of dreams, in the most literal sense, Kota has created, honed, and polished craftsmen, artisans and students since the longest time.

Rich handicrafts, flourishing industries, hi-tech companies, abundant coaching classes and people who become a part of this peculiar city, is what makes Kota different from all other cities in Rajasthan.

Kota as a City

Set along the eastern banks of the Chambal River, Kota is an amalgamation of heritage, success stories and urban lifestyle. A city of dreams, Kota is a haven for students with aspirations.

With a rich revenue history, dating as far back as the 1600s, Kota has grown exponentially as a city. Though majorly an Urban jungle, the plush lineage is reflected through the monuments, havelis and prehistoric caves.

Home to some of the most essential industries, handicraft factories and educational hubs, Kota has been a growing economy since the earlier times.

Kota as an Educational Hub

The journey began in 1985, when a student from Bansal Classes cleared IIT-JEE for the first time. The dream that began with teaching class 7th, soon became a systematic process of creating world-class toppers.

Each year lakhs of students come to Kota, with dreams and aspirations to become people of the world. The city of dreams may not have been kind to all the students, but it has shaped the lives of millions.

However, the city has become a hub for numerous Coaching Institutes that has become a factory of students opting for competitive exams.

Things to do in Kota

A journey into the past, Garh Palace houses multiple architectural structures built in Rajput style architecture. The fort is also famous for the City Palace and features a museum that reflects the rich history of Kota.

Perched by the Chambal River, Abheda Mahal was built by Maharaja Ummed in 1346. Famed for its stories and the beautiful pond, Abheda Mahal is a must-visit for admirers of architecture and history.

Chambal Garden is enveloped by lush greens which makes it an amazing picnic spot. It is undoubtedly one of the most picturesque spots as it offers a spectacular view of the Chambal Lake.

Built-in 1740, Jagmandir Palace floats in the middle of the Kishore Sagar Lake. Crafted in red sandstone, this spot served as the pleasure palace for the royals.

Kota is famous for its Kota Doria, Gold Jewellery and Kota stone. The history of art in this city of Rajasthan dates back to the 12th century.

The Kota Doria sarees are an ancient craft of Rajasthan which still makes its mark in today’s fashion industry. Kota Doria is one of the finest weaves in Rajasthan and recognised all over the world for its panache.

Abundantly found in the region Kota Stone is one of the grained variety of limestone. The colour of the Kota Stone ranges from greenish-blue to earthen brown. Known for its quality and toughness, it is widely used throughout the country.

Known for its savoury flavours, distinct use of spices and diversity of its cuisines, Rajasthan really offers lip-smacking delicacies. The famous delicacies offered by the city includes Kota Kachori and Paani Patashe. A hot and crispy taste of the Kachori with Green Chutney is food for your soul. If you are one for street food, then there is no better destination than Rajasthan. And yet again, Kota marks an exceptional place for its Chat at Chaupati.

Kota Kachori is one of its kind delicacy. The Suwalal Kachori Shop is one of the must-visits on your food trip. Dal Kachori, Pyaaz Kachori, Kadi Kachori and the most special of them all, the Kota Kachori is not just food, it is an experience for your taste buds.

A quirky mix of heritage, urbanity, and dreams, Kota is an ancient city with modern history. A sanctum for students, and a thriving spot for artisans and industries, Kota is not like any other bustling city. It has preserved its charm, cuisines, and culture.

A city known for its coaching classes and success stories has much more to offer to the residents and visitors.

Follow Rajasthan Studio on Instagram for more amazing art and travel content. Reach out to us on email at contact[at]rajasthanstudio[dot]com. This blog is curated by Rajasthan Studio and written by Rucha Bhide.