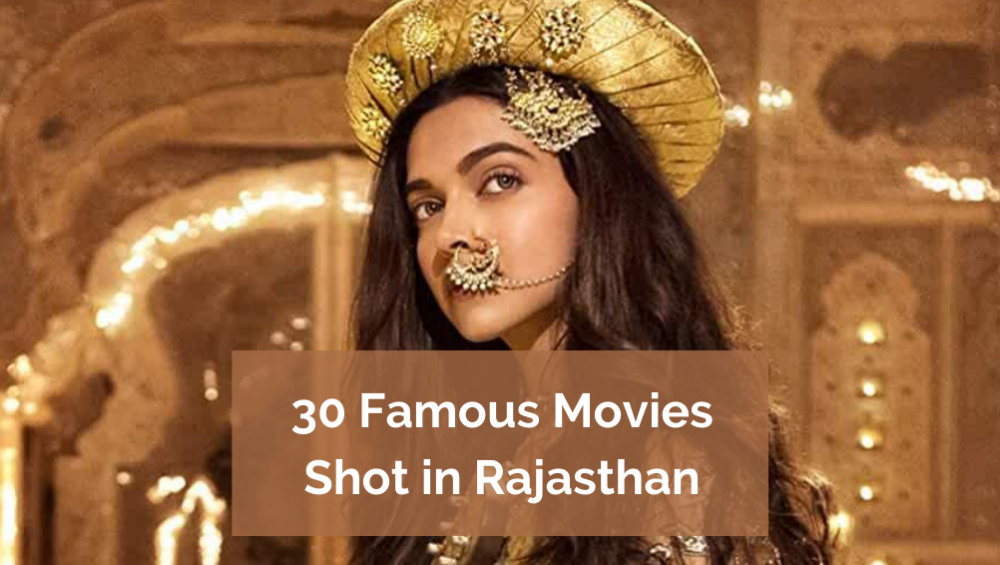 Well, in case you didn’t know, Rajasthan is not only known for its art, culture, music and dance but is also quite famous in Bollywood as A LOT of movies have been shot in aesthetic forts and bazaars of the city! So, grab a large bucket of popcorns and a glass filled with coke as I’ve put together 30 such legendary movies for you to watch!

Bajirao Mastani, featuring one of the most loved duo – Ranvir Singh and Deepika Padukone alongside Priyanka Chopra, was shot at Amer Palace in Jaipur. Well, it stayed and will continue to stay one of the best movies of its times not only because of the unmatchable elegance and the chemistry of the actors but also the grandiosity that the movie encapsulates.

Dhanak (2016) is known to be one of the finest movies of Nagesh Kukunoor. It is a story about two children who set off alone on a 300 KM journey beating the unbearable climate as well as all the difficult circumstances.

As soon as we talk about historical romances, Ashutosh Govariker’s masterpiece of a film Jodhaa Akbar is the first one to pop in our minds, isn’t it? Despite the number of years, it’s still known to be one of the best period movies of all time.

This comedy-drama film featured Salman Khan and Kareena Kapoor Khan as the lead roles. In addition to that, this movie made sure of stealing our hearts at the theatres with one of the finest performances by Mr Khan and a heart-touching storyline and message.

This romantic comedy featuring Alia Bhatt and Varun Dhawan weaves a tale of a chauvinistic fiance following a headstrong independent air hostess who denies compromising on her career.

Bol Bachhan is an action-comedy featuring Ajay Devgn and Abhishek Bachchan as protagonists along with Prachi Desai and Asin. Well, we all definitely had a good time watching the film, however, did you guys know that this film was inspired from the 1979 film Gol Maal? No right? Well, me neither!

Goliyon Ki Rasleela Ram-Leela was a tragic love story starring Ranvir Singh and Deepika Padukone for the very first time together. The film was shot initially in Gujarat, however, some sequences were also shot at Udaipur Palace and Gangaur Ghat. Remember how they both made us drool over their chemistry and their magnificently drafted characters?

When this road drama directed by Imtiaz Ali starring Alia Bhatt and Randeep Hooda aired, people showered it with love, not just because of a phenomenal storyline but also because of an outstanding performance by Bhatt.

Khoobsurat was a romantic comedy starring Sonam Kapoor and Fawad Khan. Besides, it was based on the 1980 film with the same name and had an amazing set of songs that didn’t leave the parties for a very long time along with a bittersweet romance of the characters was highly appreciated and loved.

PK starred Amir Khan along with Anushka Sharma in the lead roles along with several others. In addition to that, this movie is a satire on the religion, customs, languages, attires, notions amidst several others that humans follow wrapped in comedy and drama. The movie not only bagged laurels and trophies but also gave people some food for thought.

Dor is one of the masterpieces of Nagesh Kukunoor starring Ayesha Takia, Gul Panag and Shreyas Talpade. It’s a story about two women who come together by fate and form a bond of friendship that eventually redeems them both from the choking customs and traditions.

Paheli, starring Shahrukh Khan and Rani Mukherjee is a fantasy and a remake of a 1973 Hindi movie, Duvidha by Mani Kaul. Based on the short story written by Vijayadan Detha in Rajasthani language, it is a story of a couple visited by a ghost who falls in love with the wife.

Prem Ratan Dhan Paayo, with Salman Khan and Sonam Kapoor in the lead roles, was appreciated for the music and the traditional touch that the film has to it.

Rang De Basanti is one of the best movies till-date that received an overwhelmingly positive response by the audience and the critics. With a thought-provoking story and an excellent performance by all the actors including Amir Khan, Siddharth Narayan, Soha Ali Khan and others, the movie was showered with love by all.

This movie is a romantic comedy-drama starring Sushant Singh Rajpur, Parineeti Chopra and Vaani Kapoor in the lead roles. With an excellent performance by Rajput, the movie focuses on extremely important issues including youth’s take on the commitment, relationships, marriages and more.

This movie never left us, did it? It feels like Naina, Bunny, Aditi and Adi still reside in us. Yeh Jawaani Hai Deewani starring Ranbir Kapoor, Deepika Padukone, Kalki Koechlin and Aditya Roy Kapoor is a romantic comedy that bagged tons of appreciations and laurels.

Now, I think it would be safe to say that Bhool Bhulaiya is still one of our favourite movies, isn’t it? And I think it was because of formidable performances by Akshay Kumar, Vidya Balan, Shiny Ahuja, Ameesha Patel, Paresh Rawal, and more along with a well-thought storyline. So, if you’re in the mood to ruin your night’s sleep, watch this movie, fellas, I totally recommend it!

Well, if you haven’t watched this action-comedy, featuring Amitabh Bachchan and Govinda in the lead roles, already then now is the time to revisit this best of its age remake of a Hollywood movie, Bad Boys!

Veer is an epic action film, featuring Salman Khan, Zareen Khan, Mithun Chakraborty and more. It is a story about a Pindari prince who wishes to continue his father’s legacy.

This romantic comedy-drama, starring Akshay Kumar and Katrina Kaif in the lead roles, not only evokes bouts of humour but also a pinch of patriotism. Besides, you just can’t get enough of it in just a single watch.

Well, as soon as we talk about a few famous films of the 90s, Hum Saath Saath Hain is one of the very firsts we think of, isn’t it? That’s because, this romantic drama, featuring Salman Khan and Aishwarya Rai Bachchan, was a complete package of everything, including soulful music, romance, comedy and whatnot.

Hum Saath-Saath Hain is a classic drama catering to the family values, traditions, values and whatnots with Salman Khan, Saif Ali Khan, Karisma Kapoor and others in the lead roles.

Guide was an adaptation of R.K. Narayan’s book and witnessed a phenomenal performance by actors Dev Anand and Waheeda Rehman. Besides, it had extraordinary music by S D Burman containing one of the famous songs, Aaj Phir Jeene Ki Tamanna Hai which was shot in the Chhittor Fort In Rajasthan.

“Mere Karan Arjun aayenge” is an eternal dialogue and it ain’t going anywhere anytime soon, is it? It was a one-of-its-kind action film, featuring Salman Khan, Shahrukh Khan amidst others. Moreover, it was entirely shot in different parts of Rajasthan, some of them being, a village in Alwar District, Durgah Temple in Pushkar, Ajmer and Sariska Palace in Alwar.

Baadshaho was a period action-thriller. Furthermore, it was set in the emergency period of 1975-77, featuring Ajay Devgn, Emraan Hashmi, Ileana D’Cruz, Esha Gupta, and more, and was filmed At Jodhpur, Rajasthan.

Border was a war drama film about the Indo-Pakistani War of 1971. Moreover, it was based on real-life events with outstanding performances. The cast includes Sunny Deol, Sunil Shetty, Akshaye Khanna, Jacky Shroff, Tabu, Pooja Bhatt, amidst others and heartfelt songs and music.

Delhiites who have been longing for the city during the pandemic and the ones who simply love the city, well, I totally recommend you to watch Delhi 6. This is an exceptional film starring Sonam Kapoor, Aditi Rao Hydari, Abhishek Bachchan and more. The movie is about Delhi, it was shot at Sambhar, which had a similar architecture as that of Old Delhi.

This iconic romantic drama not only earned a universal admiration but also respect from all over the world. Further, this history-making film features the very graceful Madhubala alongside Dilip Kumar and more.

Manikarnika, a period-drama movie, starring Kangana Ranaut as Rani Lakshmi Bai. In addition to that, it was shot at several parts of Rajasthan including Jaipur, Jodhpur, Jhunjhunu and Bikaner. The film was highly appreciated.

30. Parmanu: The Story Of Pokhran at Pokhran, Jaisalmer

This is a historical action-drama film and featured John Abraham, Diana Penty and Boman Irani. Besides, it was mostly praised by the critics and is definitely a worth-the-watch. And as the name suggests, the major portions of the film were shot in Pokhran and areas of Pokhran Fort, Aada Bazaar, Gandhi Chowk Main Market and the Gomat Railway Station.

So, what are you waiting for! Save the page and spend your weekends watching these awesome movies shot in different parts of Rajasthan. Well, you can thank me later! Besides, if you know of more movies that were shot in Rajasthan, then write to us right away!

Also follow Rajasthan Studio on Instagram for more amazing art and travel content. Reach out to us on email at contact[at]rajasthanstudio[dot]com. This blog is curated Rajasthan Studio and written by Prachi Batra.